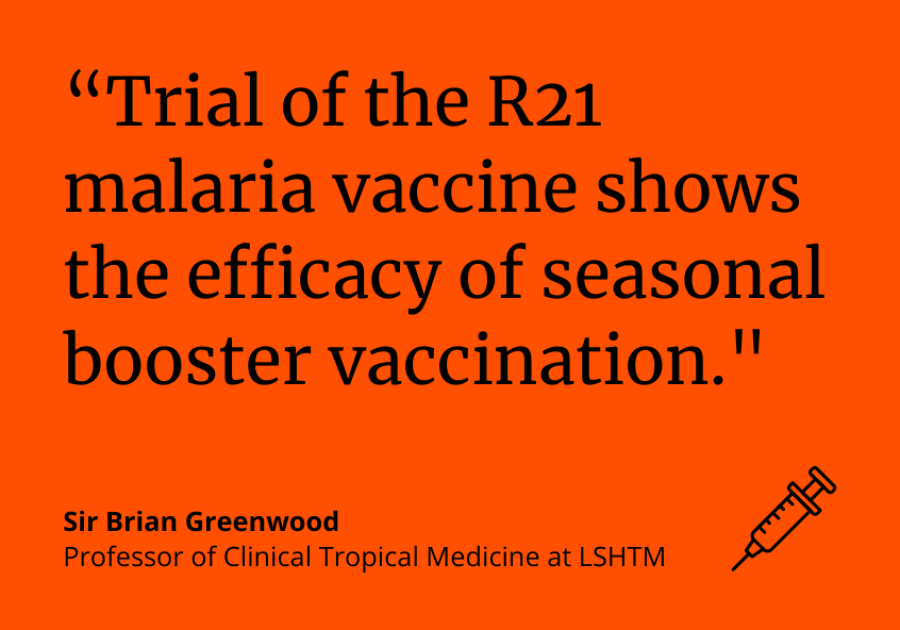 Malaria is a disease that targets the most vulnerable, especially children under five years old, who account for 80% of malaria deaths in the African region. LSHTM researchers led on the first parasitical vaccine to be recommended by WHO in October 2021, which heralded a landmark breakthrough in malaria prevention across the continent.

This vaccine, RTS,S, does not provide complete protection but, when used seasonally in combination with a preventative drug, dramatically reduces malaria among young African children. However, there is still a need for improved vaccine candidates to provide greater protection.

Research from the University of Oxford and their partners have reported new findings from their Phase 2b trial following the administration of a booster dose of a candidate malaria vaccine, R21/Matrix-M™ – which previously demonstrated high-level efficacy of 77% over the following 12 months in young west African children in 2021.

Professor Brian Greenwood said: "The paper in Lancet Infectious Diseases by Datoo et al. reports over 70% protection against clinical episodes of malaria in Burkinabe children over a two-year period following three priming doses of the R21 malaria vaccine, given in early life, followed by a booster dose of vaccine given just prior to the malaria transmission season, which is an important finding.

"The trial did not include a group of children who received just the priming doses of vaccine, so it is not possible to deduce from this paper how necessary booster doses of the R21 vaccine are to sustain protection over the first five or more years of life during which children are still at high risk of malaria in many seasonal transmission areas.”