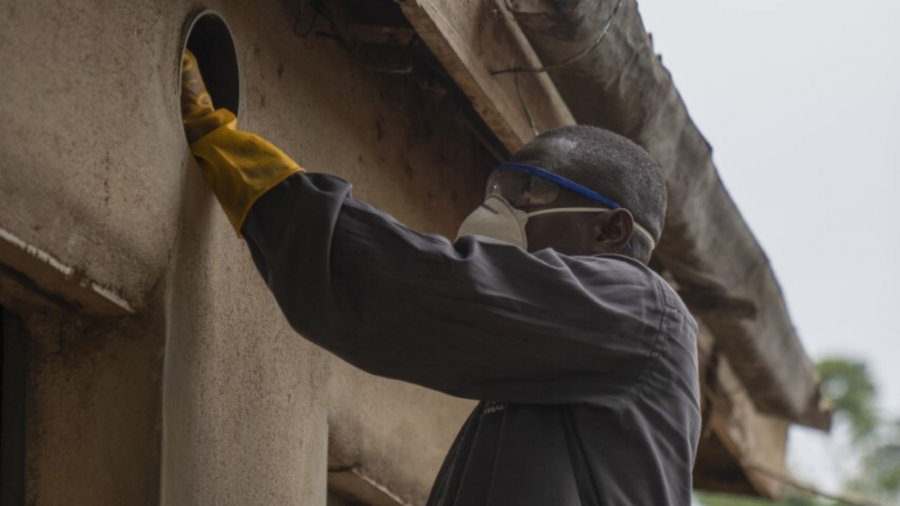 A new type of malaria intervention that involves turning houses into lethal lures has significantly reduced incidence of malaria among children in Côte d’Ivoire, Africa, according to new research published in The Lancet.

The new house modification intervention uses window screening, together with PVC tubes fitted with insecticide-laced screens (In2Care® EaveTubes) which are installed under the eaves of homes. By combining a physical barrier plus an insecticide, the housing modification intervention both blocks and kills mosquitoes, thereby protecting not only the people living inside, but also the community at-large.

The team also found that the combination of In2Care® EaveTubes and window screening was similar in cost-effectiveness to other malaria control interventions used across sub-Saharan Africa. The team say it is potentially a new strategy to supplement existing vector control tools.

Professor Matthew Thomas affiliated with Penn State who led the research, said: “Eighty percent of malaria transmission happens at night when people are in their homes. Insecticide-treated bed nets have been shown to reduce malaria and are probably one of the most important public health tools in sub-Saharan Africa. But they need to be replaced every three years and many people don’t have access to them, or don’t use them properly.

“In this study, we essentially elevated the concept of an insecticide-treated bed net to the level of the house. We demonstrate that turning the house itself into a ‘lure and kill’ device significantly reduces incidence of malaria among children, even in areas where malaria-carrying mosquitoes are highly resistant to the insecticides that are most commonly used on bed nets.”

The team’s goal was to determine if a combination of adding screening to windows plus EaveTubes (referred to as, SET) would reduce exposure to malaria mosquitoes and, thereby, reduce clinical malaria incidence over two years in children ages 6 months to 10 years living in central Côte d’Ivoire.

Dr Raphael N’Guessan, is a study author and a medical entomologist at the London School of Hygiene & Tropical Medicine with an affiliation at Institut Pierre Richet in Bouaké, Côte d’Ivoire. His family home lies within one of the villages that the team studied.

He said: “Malaria is the leading cause of death among children under five years of age and of pregnant women in Côte d’Ivoire. Diagnostic tests conducted in random subsets of children before we began the trial indicated that in some of the study villages more than 90% had signs of malaria parasite infection, though many without symptoms. The lowest rate of infection we observed in a single village was about 45%.”

The project’s study area included 40 villages in central Côte d’Ivoire. Twenty of the villages were part of the treatment arm in which all eligible households were offered SET. The other 20 villages were used as the control arm and received no house modification. Households in both study arms were offered insecticide-treated bed nets as a baseline intervention.

The researchers regularly screened for malaria in a cohort of 50 randomly selected children in each of the villages, for a total of 1,300 and 1,260 children in the control and intervention arms, respectively. At the initial enrollment visit, all cohort children received a three-day course of an antimalarial medicine to clear any existing malaria parasite infection. A second round of parasite clearance took place one year later. If at any point during the study, a child tested positive for malaria, they were he or she was treated with an antimalarial medicine.

Dr Jackie Cook, associate professor of epidemiology at the London School of Hygiene & Tropical Medicine and study co-lead author, said. “We found an overall reduction in incidence of clinical malaria of 38% in the intervention arm, and in villages where SET coverage was above 70% (13 out of the 20 in the intervention arm), risk of malaria infection was 47% lower than in control village clusters.

“Even in villages with less than 70% coverage, there still appeared to be some benefit compared to control villages.”

The cost-effectiveness analysis measured the incremental economic and financial cost per malaria case averted by the SET intervention compared to the control arm.

Dr Eve Worrall, health economist and senior lecturer at the Liverpool School of Tropical Medicine, said: “Rapid economic and population growth in sub-Saharan Africa means that millions of new houses will be built in the coming decades and millions more existing houses are being retrofitted with new roofs and other features. Our economic analysis suggests SET is an attractive option for improving population health in Côte d’Ivoire and is similar in cost-effectiveness to other core vector control interventions used across sub-Saharan Africa.”

Dr Eleanore Sternberg, who was a Research Associate with Penn State at the time of the trial, managed the project and lived in Côte d’Ivoire for the duration, said that the multidisciplinary project would not have been possible without the efforts of around 50 Ivorian project staff and nearly 900 volunteers from the study villages.

She said. “This project was an opportunity to interact with some extraordinary people to do something that we hope will make a difference in the world. That’s why we did the work.”

The trial shows that the combined intervention of house screening and In2Care EaveTubes resulted in a substantial drop in malaria, however, additional trials are needed to confirm these initial results and to establish the contribution of the two elements of the intervention.

These exciting first results suggest the concept of a lethal house lure could contribute substantially to malaria reductions in the future. Suitable pathways for the rollout and scale up of house modifications for malaria control will require cooperation between health and housing sectors in countries where the disease remains endemic.