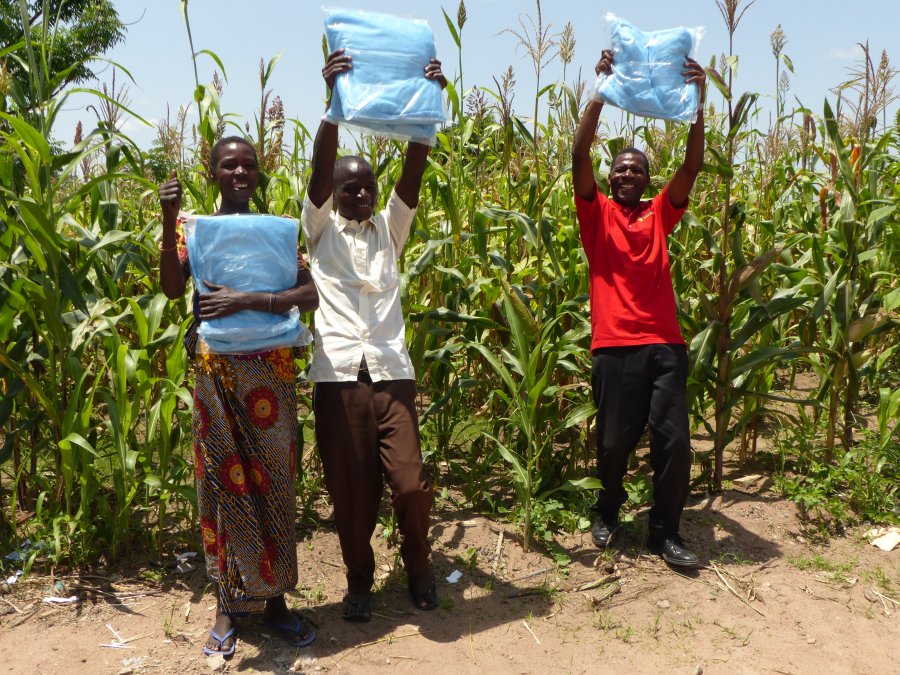 A novel class of bed net that kills mosquitoes resistant to traditional insecticides by making them unable to move or fly, significantly reduces malaria infection in children, according to new research published in The Lancet.

Unlike other insecticides which kill the mosquito via the nervous system, the effects of the new bed net mean the mosquito dies from starvation or being unable to fend for itself.

The two-year community randomised trial involved more than 39,000 households and followed over 4,500 children aged 6 months to 14 years in Tanzania. It found that a long-lasting insecticidal net treated with two insecticides, chlorfenapyr and pyrethroid (chlorfenapyr LLIN),reduced the prevalence of malaria by 43% and 37% in the first and second year respectively, compared to the standard pyrethroid only long-lasting insecticidal net (LLIN).

Chlorfenapyr LLIN also reduced clinical episodes of malaria by 44% over the two years and the number of malaria-infected mosquitoes captured by 85%.

The study was conducted by the London School of Hygiene & Tropical Medicine (LSHTM), National Institute for Medical Research, Kilimanjaro Christian Medical University College in Tanzania, and the University of Ottawa, Canada.

Long-lasting insecticidal nets are the cornerstones of malaria control in sub-Saharan Africa. However, in the past few years the decline in malaria has stalled and even reversed in some countries. In 2020, there were 627,000deaths from malaria, mainly in Africa and occurring mostly in children.

Malaria’s resurgence is partly due to the bed nets’ effectiveness being compromised by widespread resistance to pyrethroid insecticides in Anopheles mosquitoes. Chlorfenapyr works very differently to pyrethroid, causing wing muscle cramps that stop the flight muscles from functioning. This prevents mosquitoes from making further host contacts or biting, ultimately leading to their death.

The research team says the novel net could lead to significant malaria control gains in sub-Saharan Africa, but more research is needed to examine feasibility of scale-up, and on resistance management strategies needed to preserve their effectiveness long term.

Dr Jacklin F. Mosha from the National Institute for Medical Research, Tanzania, the study’s first author, said: “Malaria remains a huge problem across sub-Saharan Africa and is one of the leading causes of death in Tanzania. We urgently need new interventions to get control efforts back on track and protect young people from this deadly disease. These exciting results highlight that we have another effective tool to help control malaria.”

Children from 72 villages in Misungwi, where high levels of resistance to pyrethroids have been reported, were randomised into groups and received one of three of the most promising new generation of bed nets. Children were then tested for malaria at the end of each rainy season.

After 24 months, malaria infection was reduced by 37% in children that received the chlorfenapyr LLIN (326/1272) compared to those receiving standard pyrethroid LLIN (549/1199).

A bednet treated with a piperonyl butoxide (PBO) to enhance the potency of pyrethroid reduced malaria infection by 27% over the first 12 months of the trial, but after two years malaria infection in this group was similar to the standard net. This is likely due to it being used less regularly as holes appeared in this net more quickly.

A third type of bednet, treated with pyrethroid and pyriproxyfen which sterilises female mosquitoes, had little additional effect compared to the standard pyrethroid net. The reason is not fully understood but likely due to insufficient pyriproxyfen remaining on the net over time.

Dr Manisha Kulkarni, a scientist at the University of Ottawa’s Faculty of Medicine, said: “By essentially ‘grounding’ the mosquito, our work on adding chlorfenapyr to standard pyrethroid bed nets has great potential to maintain control of malaria transmitted by resistant mosquitoes in Africa.”

The higher costs of the chlorfenapyr LLIN were offset by the savings from reducing the number of malaria cases requiring treatment. Distributing chlorfenapyr nets is therefore expected to cost households and society less overall than standard, PBO, or pyriproxyfen nets.

Dr Natacha Protopopoff, from LSHTM and study Principal Investigator, said: “We’ve shown chlorfenapyr LLINs are safe, decrease malaria infection in children and are cost-effective. This is important evidence for the World Health Organization and malaria control programmes, when they are assessing whether these new nets should be deployed in areas of insecticide resistance when standard bed nets have failed.

“However, caution is needed. The massive scale-up of standard pyrethroid LLINs 10-20 years ago led to the rapid spread of pyrethroid resistance. The challenge now is to preserve chlorfenapyr’s effectiveness by developing rational resistance management strategies.

“National malaria control programs and stakeholders should urgently advocate for better textile and insecticide durability for all novel classes of bed nets to maximise their longevity and potential.”

LSHTM scientists first identified the potential of the chlorfenapyr insecticide on malaria mosquitoes almost 20 years ago. The chlorfenapyr LLIN was subsequently developed by the manufacturer BASF in Germany, together with LSHTM.

Professor Mark Rowland, from LSHTM, explained: “When it comes to resistance to standard nets we were running out of options, but chlorfenapyr has come to the rescue. Although it may appear this has happened overnight, in reality there were twists and turns over many years to show how the new class of insecticide truly works ,to develop improved formulations to confirm effectiveness and safety on nets, and finally to demonstrate control of malaria in large scale trials.

“What really threw us for a long time was that in daytime tests the chlorfenapyr was not very toxic to the mosquito, but at night when the malaria mosquitoes naturally fly up against the treated bednet it gets a severe case of muscle cramps so it buckles and falls to where it is likely to be carried off by scavenging ants. No other mosquito insecticide works like this, and because of the unique mode of action it kills all kind of mosquito that have evolved resistance to other insecticides. It should have a long future.”

Professor Franklin W. Mosha, Principal Investigator from the Kilimanjaro Christian Medical College, Tanzania, said: “This achievement has only been made possible through partnership between research institutes, manufacturing industry and funding agencies like the Bill & Melinda Gates Foundation and then the Innovative Vector Control Consortium We can all take pride in our respective roles in getting us to this exciting point.”

The authors acknowledge limitations of the study, including the rapid decrease in use of trial LLINs, within a context of high overall net usage, which may in part explain the relative lack of effectiveness of PBO LLINs and pyriproxyfen LLINs over the two years compared to standard LLINs.

This is the first of two trials of chlorfenapyr nets. The second in Benin in West Africa with the Centre de Recherche Entomologique de Cotonou and LSHTM is due to report later this year. This will confirm if chlorfenapyr LLINs are also more effective in a different malaria setting and if pyriproxyfen LLINs could perform better when net usage is higher.

The research was funded by the Joint Global Health Trials: Foreign, Commonwealth and Development Office, Medical Research Council, Wellcome and Department of Health and Social Care.