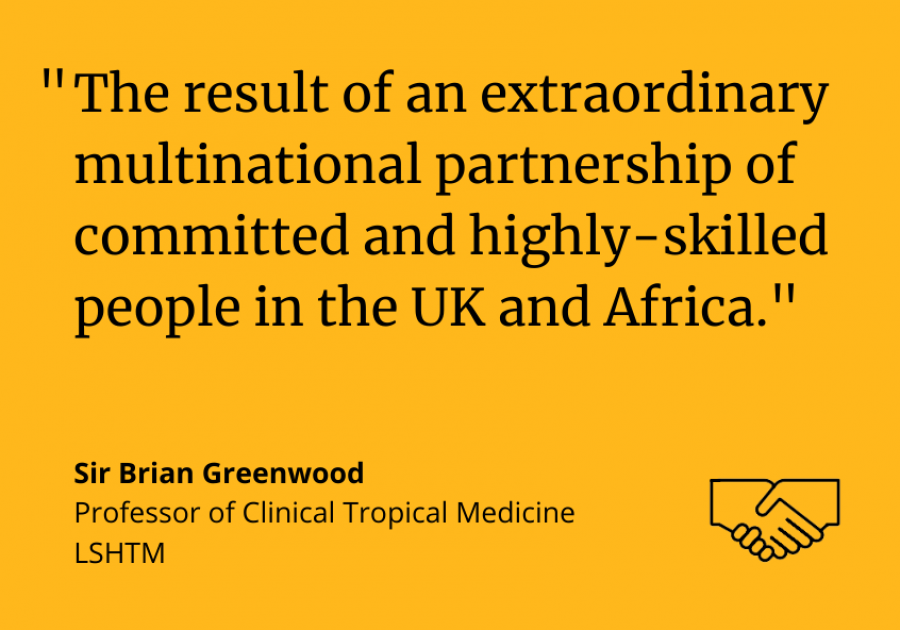 Researchers from the London School of Hygiene & Tropical Medicine have hailed a landmark decision to recommend widespread use of a malaria vaccine for the first time, potentially saving tens of thousands of lives in Africa every year.

The World Health Organization (WHO) has announced that the RTS,S/AS01 (RTS,S) malaria vaccine should be given to children in sub-Saharan Africa and other regions with moderate to high P. falciparum malaria transmission.

The recommendation is based on results from an ongoing pilot programme in Ghana, Kenya and Malawi that has reached more than 800 000 children since 2019.

Although not a perfect vaccine, the addition of RTS,S to currently recommended malaria control interventions to maximise impact in high burden areas is a major boost to efforts to drive down child mortality in Africa

With partners around the world, LSHTM researchers have conducted a wide range of work that has helped develop crucial evidence underpinning this historic milestone in global health, from  designing and implementing clinical trials, to researching where RTS,S might be best targeted and to whom.

After considerable gains in the past two decades, malaria control progress has stalled and new tools are urgently needed to fight malaria and protect vulnerable children at risk of illness and death.

Africa continues to bear the heaviest malaria burden and African children are at highest risk of dying of malaria: more than 260 000 African children under the age of five die from malaria annually.

Professor Sir Brian Greenwood from LSHTM has played a pivotal role in malaria vaccination trials and research since the inception of RTS,S.

He said: “This is a historic day for malaria. For the first time we have a vaccine that is now recommended for expanded use in areas of Africa where the disease is endemic.

“With malaria still a major cause of death, especially among children in Africa, this decision has the potential to save millions of young lives. We urgently need more tools and innovative, practical solutions to malaria.

“The RTS,S vaccine does not provide complete protection but this decision is testament to the global health community's drive and vision to find a way forward. As part of a tailored approach it has great potential to reduce death and illness in high burden areas, especially when combined with other interventions such as seasonal malaria chemoprevention and bed nets, and be a huge boost to malaria control efforts.

“It's taken a long time to get to this momentous day but the journey has been worth it. The decision is the result of an extraordinary multinational partnership of committed and highly-skilled people and organisations in the UK and Africa and comes after many years of work and dedication.

“It is important that long-term investment and commitment to science and global health partnerships like these continue so that the complex challenges that a disease such as malaria poses can be addressed and the potentially lifesaving benefits of RTS,S and other interventions can be realised.”

Professor Greenwood said: “The SAGE recommendation, based on the findings of the pilot trial, sets out a way that the vaccine can now be deployed safely and effectively in areas similar to those where the pilot trial was implemented. However, it is important that now that it is known that the vaccine is safe, work continues to explore the optimum way in which the vaccine could be delivered. This includes in areas where the epidemiology of malaria is different from that of the pilot study areas, for example areas where the transmission of malaria is very seasonal.”

LSHTM staff and partners in the UK and Africa have been at the heart of malaria vaccine research, from the first malaria vaccine trial in Africa in the 1990s through to field trials and associated evaluations, immunological and safety assessments of RTS,S in Tanzania and Ghana in the 2000s. More recently this has included analysis of WHO’s pilot immunisation programme over the last two years in Ghana, Kenya and Malawi where 800,000 children were given the vaccine, and the recent pioneering trial investigating a combination of seasonal malaria chemoprevention and RTS,S in Burkina Faso and Mali.

Professor Sian Clarke, Co-Director of LSHTM’s Malaria Centre, said: “A malaria vaccine that prevents severe disease in African children will bring major benefits in reducing the worst effects of malaria – premature death and long-term neurological deficits in survive – and is a most welcome addition.

“Though we have seen substantial progress in the last two decades, progress in Africa has stalled. The advent of a vaccine is a gamechanger, that has potential to regain momentum in this fight.

“However, whereas the insecticide on bed nets also has the power to protect others in the same community who do not sleep under nets, by killing the mosquitoes that transmit malaria, a vaccine will only protect those children who are vaccinated. It will therefore remain important to maintain good coverage and use of insecticide-treated nets in malaria-endemic countries.”