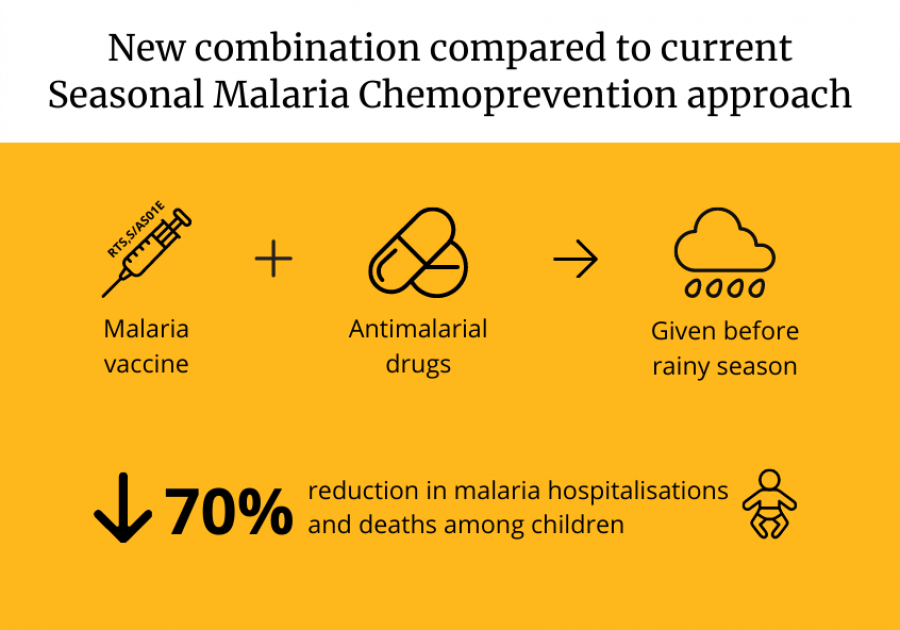 Giving young children the world’s first malaria vaccine RTS,S/AS01E and antimalarial drugs before the rainy season could substantially reduce cases of life-threatening malaria in the African Sahel, suggests a new study published in the New England Journal of Medicine.

It followed nearly 6,000 children aged 5-17 months in Burkina Faso and Mali, two countries with a very high burden of malaria. After three years, the combination of seasonal administration of antimalarials (known as Seasonal Malaria Chemoprevention/SMC) and vaccination lowered clinical episodes of malaria, hospital admissions with WHO-defined severe malaria, and deaths from malaria by about 70% compared to Seasonal Malaria Chemoprevention alone. SMC is the approach currently used in both countries.

The researchers say this new combination approach has the potential to prevent malaria in large parts of Africa where malaria cases remain high and where malaria is transmitted seasonally, and that the results are important evidence for decision-makers on the use of malaria vaccines.

Seasonal vaccination with RTS,S/AS01E was also found to be as effective as four annual courses of SMC in protecting against clinical malaria.

After nearly two decades of progress, the decline in malaria cases and deaths has stalled in recent years in a number of countries. According to the World Health Organization’s (WHO) 2020  World Malaria Report there were 229 million malaria cases and an estimated 409,000 malaria deaths in 2019, with most occurring in children under five years old.

Professor Brian Greenwood from LSHTM and a member of the research team, said: “The world has made great strides in tackling malaria but the pace of progress has slowed considerably in recent years. We urgently need new interventions, particularly in many parts of the Sahel and sub-Sahel where the burden of malaria remains very high.

“We aimed to find out if RTS,S/AS01E could be more effective in areas with seasonal transmission by giving children three doses of the vaccine before the malaria transmission season, and then a booster dose before the rainy season over subsequent years. The results are very striking and could pave the way for a potential new approach to malaria control.”

In 2018, the World Health Organization and RBM Partnership to End Malaria joined with countries to launch a 'High burden – High impact' programme focusing on the countries where the burden of malaria remains high and where novel approaches to malaria control are needed.  Six of the 10 African countries in this programme are in the African Sahel and sub-Sahel, including Burkina Faso and Mali.

In these countries, malaria occurs predominantly during just a few months of the year. SMC, which involves giving anti-malarial drugs sulfadoxine-pyrimethamine and amodiaquine to young children every month during the rainy season, is highly effective in preventing malaria. Despite this, malaria is still the main cause of death and hospital admissions among the more than 20 million children under the age of five in most areas where SMC is now deployed.

A large Phase 3 trial has previously found 3 doses of RTS,S/AS01E vaccine provided about 50% protection over a one year period. However, in the months immediately after vaccination, efficacy is much higher, about 70%.

In this double-blind, randomised controlled trial, 6,000 children were split into three intervention groups – one that received the RTS,S/AS01E  vaccine alone, another that received SMC alone, and a third that received a combination of vaccine and SMC.

Professor Daniel Chandramohan from LSHTM and member of the research team, said: “The results of the trial were much more successful than we had anticipated. Our work has shown a combination approach using a malaria vaccine seasonally – similar to how countries use influenza vaccine – has the potential to save millions of young lives in the African Sahel. Importantly, we didn’t observe any new concerning pattern of side effects.

“Further research is now needed to examine how seasonal malaria vaccination could be delivered most effectively at scale.”

There was some evidence that efficacy of the combined intervention against clinical malaria was higher in the few months after the primary series of vaccination than after the booster doses, but efficacy was seen in each year of the study.

While the drugs currently used for SMC remain effective in the study areas, if resistance to them increases without available alternatives, seasonal vaccination with RTS,S/AS01E could be a potential solution.

Professor Jean-Bosco Ouedraogo, Institut de Recherche en Sciences de la Santé, Burkina Faso and member of the research team, said: “I am really proud of the contribution of our African research teams to these fantastic results. I hope that this evidence will be taken into account by decision-makers as a new additional strategy for saving children’s lives in Africa.

“A collaboration among malaria endemic countries and with northern partners is essential to succeeding against malaria, including in the Sahel countries. Our work is part of this logic of south-south and north-south partnership with these impressive successful results.”

Professor Alassane Dicko, Malaria Research & Training Centre, (MRTC) Bamako, Mali, and member of the research team, said: “Our results showed that seasonal vaccination with RTS,S/AS01E  is as effective as seasonal malaria chemoprevention. This new malaria tackling tool could mean the disease is no longer the primary cause of death or hospital admissions in our settings for the very first time.

“This is wonderful news for malaria control.  We look forward to a quick policy decision and addition of this new tool to reduce the intolerable burden of malaria in our region.”

Dr Pedro Alonso, Director of the WHO Global Malaria Programme, said: “We welcome this innovative use of a malaria vaccine to prevent disease and death in highly seasonal areas in Africa. RTS,S is the first malaria vaccine that has already reached more than 740 000 children through routine childhood vaccination in Ghana, Kenya and Malawi in a landmark pilot implementation, through which more than 2.1 million malaria vaccine doses have been delivered.

“The level of vaccine uptake by families over a relatively short period shows strong community demand for the vaccine and the capacity of childhood vaccination programmes to deliver it.”

In light of the initial positive results of this Phase 3 trial, children are continuing in the trial in their assigned groups for a further one or two years until they reach the age of five years when, in Burkina Faso and Mali, they will no longer be eligible to receive SMC. The findings from this extension study will be available in 2022.

The authors acknowledge limitations of the study, including that both antimalarials and the RTS,S vaccine were given under trial conditions, thus achieving very high levels of coverage. If seasonal vaccination is recommended as a routine intervention in countries with highly seasonal malaria, more research will be needed to determine how this intervention can be delivered most effectively within routine programmes.

The trial was funded by the UK Joint Global Health Trials (the Department of Health and Social Care, the Foreign, Commonwealth and Development Office, the Global Challenges Research Fund, the Medical Research Council and the Wellcome Trust) grant no. MR/P006876/1, with additional funding from PATH’s Center for Vaccine Innovation and Access, grant no. 18269. The RTS,S/AS01E vaccine was donated by GlaxoSmithKline.