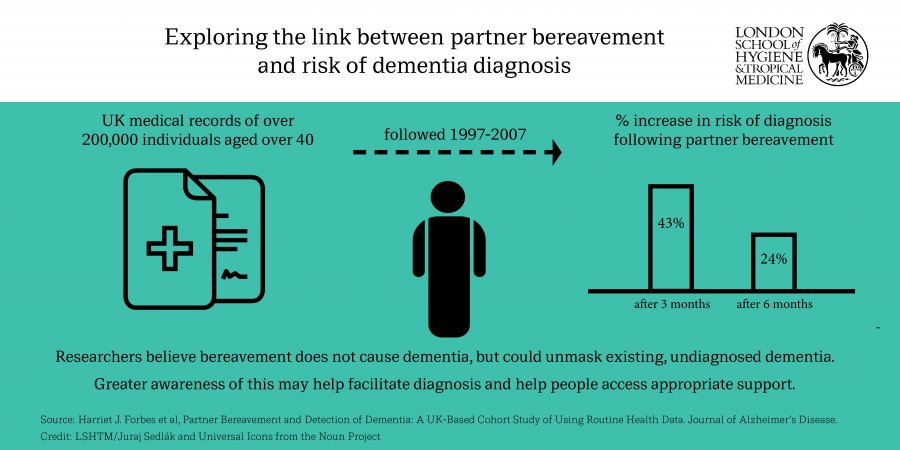 Individuals who experience the loss of a partner are more likely to be diagnosed with dementia within the three to six months following the bereavement, according to a new study published in the Journal of Alzheimer’s Disease.

Led by researchers at the London School of Hygiene & Tropical Medicine, this is the first UK-based study to explore the link between partner bereavement and the risk for receiving a dementia diagnosis, and if the amount of time after death affects that risk.

The study found that individuals who experience partner bereavement were nearly 50% more likely to be diagnosed with dementia within three months after the bereavement, compared to those whose partners are still living.

The researchers suggest this association is due to the bereavement unmasking existing, yet undiagnosed, dementia – not that bereavement directly causes dementia itself. The dementia may become more apparent due to increased access to people who can spot the symptoms and not having the partner present to help with daily tasks.

There is an urgent need for better detection of dementia cases. In the UK around 34% of dementia patients go undiagnosed – around 850,000 people are not receiving the necessary care and support they need. This number is expected to double by 2040.

Moreover, older individuals who live alone are less likely to have their dementia detected as the diagnostic process requires evidence of a decline in mental ability over time and is normally verified by a partner.

Accurate and timely diagnosis of dementia would mean access to treatments that can improve the symptoms and potentially slow down the progress of the disease, whilst also giving the patient and their family time to prepare for the future.

The UK government has committed to increasing the number of dementia patients who are formally diagnosed through Challenge on Dementia 2020 and the NHS Long Term Plan.

“Our study shows a clear link between the loss of a partner and the likelihood that the surviving partner is diagnosed with dementia in the three to six months following. This is important as a timely diagnosis for people living with dementia is essential to enable patients and their carers to receive care and support.

“We hope the findings will bring greater awareness that this period of time is a high risk for dementia diagnosis, so systems could be put in place for recently bereaved individuals which could speed up diagnosis and improve future quality of life.”

The scientists looked at UK medical records from 1997 to 2017 of over 200,000 individuals aged 40 years and older, half of which had lost their partner and the other half had not.  By following these people for up to 20 years, this study highlights the increase in dementia detection triggered by the loss of a partner.

They found that there was a 43% increase in risk of dementia diagnosis in the three months following the partner’s death, with 367 bereaved patients diagnosed with dementia in this time period compared to 254 non-bereaved.

This increase was still prevalent after six months, with individuals 24% more likely to be diagnosed with dementia compared to those non-bereaved.

Whilst this could be a result of damage to the brain due to bereavement, it is unlikely that the symptoms of dementia would manifest in this short three to six month period – dementia normally is a slow and steady decline of brain function over several years. Therefore, it is more likely that this pattern is due to pre-existing dementia that was undiagnosed.

“Our work didn’t examine why there was an increased risk of dementia diagnosis following partner bereavement. However the loss of a partner may result in the surviving partner being unable to cope with day-to-day activities without the partner to help.

“Additionally, at a time of loss friends and family tend to gather together more, so might spot symptoms of dementia which might have previously been missed. Similarly, the individuals might be in contact with medical professionals more than normal who could see the signs, creating greater opportunity for diagnosis.”

The authors acknowledge limitations of their study including that they were unable to look at the different types of dementia, and health records for dementia may have be misdiagnosed depression induced by the bereavement.

Further studies are needed to explore how the condition is affected by partner bereavement, as well as why there is an under-diagnosis issue in the UK, helping clinicians and policy-makers to implement systems to increase the amount of people diagnosed and receiving support for dementia at an earlier stage.

“This research suggests that people who lose a partner are more likely to receive a diagnosis of dementia within six months of their loss, however the reasons underpinning this link are unclear.

“The loss of a partner will have an enormous impact on anybody’s life. It’s hard to imagine how difficult it must be adjusting to life without the support of a partner while also dealing with declining memory and thinking skills.

“It is crucial that people with dementia get a reliable diagnosis without delay. A diagnosis not only helps people to make sense of the symptoms they are experiencing; it opens the door to existing treatments and support to help them manage their condition.