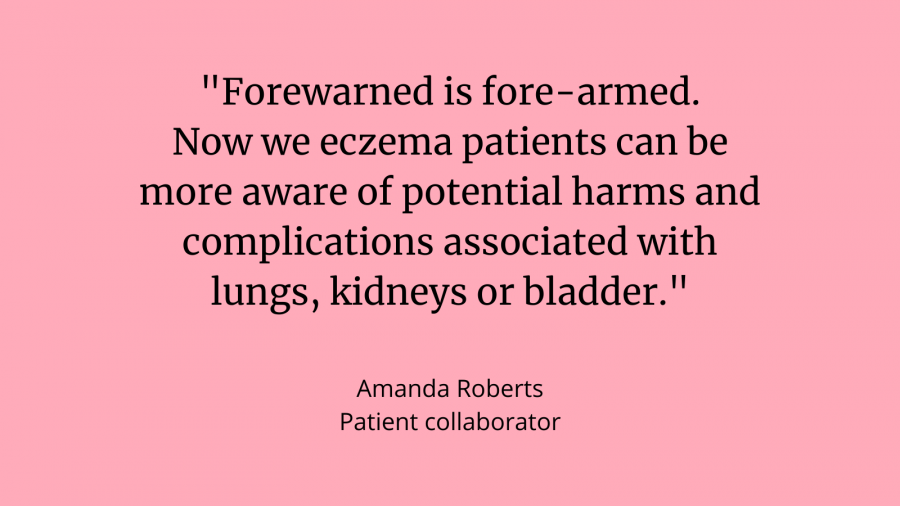 A new study has shown that, while there is limited evidence for overall increased mortality in patients with atopic eczema, those with severe atopic eczema may have a greater risk of dying from several health issues compared with those without eczema, according to a new study in the Journal of Allergy and Clinical Immunology.

The research team, led by the London School of Hygiene & Tropical Medicine (LSHTM) and funded by the Wellcome Trust, compared the risk of dying in over 500,000 adults with atopic eczema with more than 2.5 million without eczema. Patients with severe atopic eczema had a 62% higher risk of dying compared to individuals without atopic eczema, due to several causes – the strongest links of which were seen for infections, lung problems and kidney or bladder disorders.

The researchers did not set out to find the reasons behind the increases in risk of death in severe or predominantly active atopic eczema. Previous studies have suggested that the elevated risk may be linked to reduced physical activity and reduced sleep quality, as well as immunological dysfunction due to the disease itself or the drug treatments the patients might be on. They urge for more research into the causes to help develop intervention strategies.

The research was conducted in collaboration with Health Data Research UK, Aarhus University Hospital, Nottingham Support Group for Carers of Children with Eczema and the University of California San Francisco School of Medicine.

Atopic eczema affects up to 10% of adults and is becoming more common globally. The disease is characterised by itch, sleeplessness and adverse effects on quality of life. Around 30% of people with atopic eczema have moderate to severe disease.

Sinéad Langan, Professor of Clinical Epidemiology at LSHTM, said: “Recent evidence has led to a paradigm shift in how atopic eczema is perceived, from focusing on skin symptoms and associated allergic diseases, to understanding that the disease may be associated with a range of important medical outcomes.  Recently, we found atopic eczema to be associated with an increased risk of myocardial infarction, ischemic stroke, angina and heart failure.

“However, few studies have assessed if atopic eczema increases the risk of death, a research question we aimed to address in this study.”

This new research used the healthcare records from UK general practices alongside hospitalisation records and mortality data from the Office for National Statistics spanning 1998 to 2016. More than 500,000 people with atopic eczema, of which nearly 35,000 were classified as having severe atopic eczema, were matched with up to five individuals without eczema, based on their age (within 15 years), sex and general practice. This resulted in more than three million individuals were successfully matched, with a median age of 41.8 years.

The researchers found that patients with atopic eczema had 8% to 14% increased risk of death due to infectious, digestive and genitourinary causes.

Crucially, they noted that increased mortality risk was mainly in those with the most severe or more active atopic eczema. Patients with severe atopic eczema had 62% higher overall risk of death. These findings are consistent with previous studies.

Long-standing patient collaborator, Amanda Roberts, said: "Forewarned is fore-armed.  Now we eczema patients can be more aware of potential harms and complications associated with lungs, kidneys or bladder.  This research team is adding so much to our understanding of eczema."

Professor Langan added: “Although the absolute risk of death from severe eczema is low, our findings suggest that those with severe or more active forms of the disease do face a higher risk of dying from associated health issues. We hope that this new information will help inform further research to better understand this pattern and the underlying mechanisms of these associations, and subsequently inform and improve treatment processes for those with severe eczema.”

The researchers acknowledge the limitations of this study, including a lack of standardised measures of disease severity. Severity had to be identified based on hospital referral or receiving of specific therapies, prevent the researchers from disentangling the effects of treatment and severity.