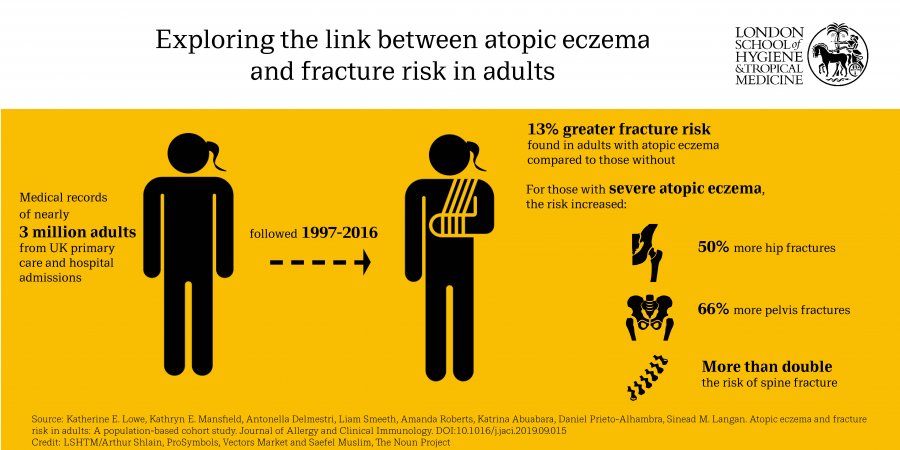 Adults with atopic eczemacould face a raised risk of fracture, with the risk increasing the more severe the condition, according to a new study published in the Journal of Allergy and Clinical Immunology.

Involving the health records of three million adults in the UK, the study, led by the London School of Hygiene & Tropical Medicine, is the largest to date examining the relationship between atopic eczema and fractures, and the first using primary care data.

It found that risk of any fracture was up to 13% greater in people with atopic eczema compared to people without. People with severe atopic eczema had a dramatically increased risk of fracture: 50% more hip fractures, 66% more pelvis fractures, and more than double the risk of spine fractures.

Importantly, the increased risk of fracture in people with atopic eczema persisted even after the researchers accounted for oral corticosteroids - drugs that are used to treat eczema that are linked to increased fracture risk.

Professor Sinéad Langan from the London School of Hygiene & Tropical Medicine and senior author of the study said: “Previous research has shown associations between atopic eczema and osteoporosis, a condition that weakens bones and makes them more likely to break, and between atopic eczema and fracture. However, this is the first evidence that eczema precedes fractures and that fracture risk increases with more severe eczema.”

Atopic eczema is a common skin condition, affecting 1 in 5 children and up to 1 in 10 adults in the UK and is becoming more common globally. Of those with atopic eczema, 30% have moderate to severe disease with approximately 5% having severe disease.  Symptoms include intense itch, pain, sleeplessness and low self-esteem.

Using UK electronic health records between 1998 and 2016 from the Clinical Practice Research Datalink and Hospital Episode Statistics, the researchers matched patients diagnosed with eczema and those without eczema on age, sex, general practice and calendar time. After adjusting for other factors such as socioeconomic status, age, body mass index and harmful alcohol use, the researchers examined the differences in increased risk of major osteoporotic fractures - hip, pelvis, spine, proximal humerus, and wrist) between the two groups.

There was strong evidence of an association between atopic eczema and increased hip, pelvic, spinal and wrist fractures. There was weaker evidence for an increase in proximal humeral fractures. The greatest increased risk was seen for spinal fracture.

Professor Langan said: “Although the overall risk is low, the substantial increase in the risk of spine, hip and pelvic fractures seen in those with severe atopic eczema is particularly concerning, given the serious health issues associated with these fractures. Atopic eczema is currently not considered a risk factor for fracture. Our results suggest that bone density screening guidelines should consider including individuals with more severe atopic eczema in order to prevent fractures, improve long-term quality of life, and reduce fracture-related healthcare costs.

“Future work should focus on determining the possible biological mechanisms linking atopic eczema to lowered bone density, and whether targeted screening and intervention would benefit individuals with atopic eczema.”

Co author Amanda Roberts from the Nottingham Support Group for Carers of Children with Eczema, said: “This work highlights an important link that, if established sooner, could have helped save my mother who had eczema all her life and died following a hip fracture. I hope our findings lead to new prevention strategies that help improve future care for those with eczema.”

The researchers acknowledge limitations of their study including the possibility that there may be other reasons explaining why people with atopic eczema may be more likely to break bones. For example, people with eczema may have daily allergies, make dietary changes (some believe that certain foods trigger eczema flares) or avoid exercise (as sweating may increase the itch associated with their atopic eczema); these factors may make them more prone to fractures.

The study was funded by the Wellcome Trust.