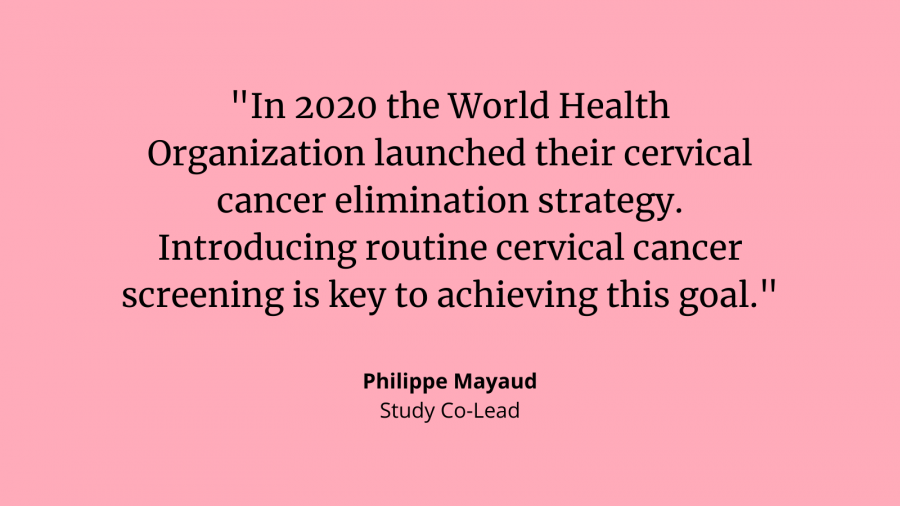 Screening women living with HIV in sub-Saharan Africa for cervical precancer using a molecular test is much more accurate than traditional methods and could reduce costly and inconvenient procedures, according to new research published in PLoS Medicine.

The study, led by the London School of Hygiene & Tropical Medicine (LSHTM) in partnership with the University of Ouagadougou in Burkina Faso, Wits Reproductive Health and HIV Institute in South Africa and Montpellier University in France was conducted among over 1,200 women living with HIV in two African countries, Burkina Faso and South Africa.

The authors note that the HPV-DNA tests are still too expensive for wide availability in low- and middle-income settings, and call for more to be done to make them more accessible.

Philippe Mayaud from LSHTM who co-led the study, said: “In 2020 the World Health Organization launched their cervical cancer elimination strategy. Introducing routine cervical cancer screening and treatment of cervical lesions is a key to achieving this goal. Cervical cancer is the second most common cancer among women in low- and middle-income countries. It is a major leading cause of cancer-related death in women in sub-Saharan Africa, with higher risk among women living with HIV. The majority of these women live in low- and middle-income countries, where access to cervical cancer screening and treatment of precancerous cervical lesions is limited.

Screening approaches most commonly used in sub-Saharan Africa include visual inspection of the cervix by a nurse or midwife using low cost and easily available materials, or pap test which checks for cervical cell abnormalities. Both have shown variable accuracy to detect precancerous lesions and can often incorrectly classify women with precancer as being disease free.

Molecular-based screening approaches, such as tests that detect cancerous, or high-risk, HPV types, are more accurate in detecting women at risk of cervical cancer. However, because they detect HPV infection rather than associated precancerous lesions, they can result in over referral of women to colposcopy, an invasive and costly procedure to determine eligibility for treatment. This is especially true in women living with HIV among whom HPV infection is common.

Professor Mayaud added: “The optimal screening test, age to begin screening and frequency of screening for women living with HIV remains uncertain. This is something our study aimed to help address."

In this study, women were recruited from HIV clinics in Ouagadougou, Burkina Faso and Johannesburg, South Africa; countries with very different HIV epidemics and differing epidemiology of HPV infection and cervical cancer. Both countries also have differing approaches to screening for cervical cancer; visual inspection methods are more commonly used in Burkina Faso while pap test is used in South Africa. All women underwent screening using visual inspection, pap test and HPV-DNA test. All women also underwent procedures to confirm presence or absence of cervical precancer. The accuracy of the various tests to detect precancer were compared.

HPV-DNA test was found to be the optimal cervical screening strategy, detecting the maximum number of women with cervical precancer.  However, due to the high prevalence of high-risk HPV, there was a greater proportion of women without precancer (45%) who had a positive HPV-DNA test. This means a second test using visual inspection or pap test was required to determine treatment eligibility. However, the study also showed that a simple user-applied modification to the HPV-DNA based test using a restricted HPV type approach resulted in fewer women without precancer testing positive.

Helen Kelly, co-investigator on the study said: “HPV-DNA tests should play an important role in cervical cancer screening for all populations, and should ensure that women at high risk of cervical cancer are identified early. A restricted HPV genotype test is especially important for women living with HIV as it allows for more targeted identification of women with the highest risk of developing cervical cancer in the future. This would ensure that treatment can be offered to women who needed it, and in general result in fewer clinic visits and reduced inconvenience to all women and costs to the service.

“However, these tests are costly. Greater effort is needed to make these technologies more accessible and affordable in settings where risk of cervical cancer and associated morbidity are greatest.”

Professor Sinead Delany-Moretlwe, HARP co-investigator in South Africa said: “Cervical cancer is one of the leading causes of preventable cancer deaths in women in Africa. These data support the potential for HPV-based screening strategies even in resource constrained settings like ours if we are to achieve the ambitious global cervical cancer elimination goal.

“Research partnerships like these are important for ensuring that the health needs of women in low and middle income countries - especially where the burden of HIV is high - are recognised and addressed as we tackle the ambitious global goal of cervical cancer elimination.”

The authors acknowledge limitations of the study, including that it did not evaluate the more recent HPV-DNA tests which are becoming increasingly available in sub-Saharan Africa, and also women included in the study from 2011 to 2014 may not reflect more contemporary cohorts of women initiating antiretroviral therapy (ART) in the unrestricted universal ART era. However this study has shown that HPV-DNA tests may prove even more accurate in women taking ART with suppressed HIV viral load.

The research was funded by from the European Commission 7th Framework Programme under grant agreement No. HEALTH-2010-F2-265396.