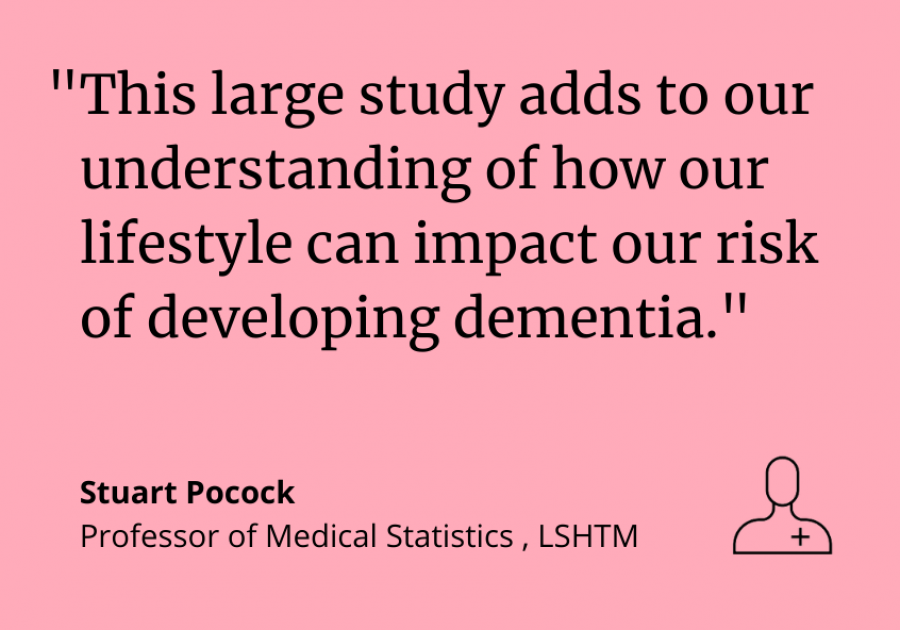 High levels of low-density lipoprotein (LDL) cholesterol in mid-life are associated with an increased risk of developing dementia and Alzheimer’s over a decade later, according to a study published in Lancet Healthy Longevity.

Elevated levels of total cholesterol were also associated with an increased risk of dementia and Alzheimer’s disease, although this link was weaker, suggesting it is largely driven by LDL cholesterol.

The largest study to date, led by the London School of Hygiene & Tropical Medicine (LSHTM) with the University of Tsukuba, Japan and OXON Epidemiology, London and Madrid, provides the strongest evidence so far on the relationship between blood cholesterol and dementia and Alzheimer’s disease.

Funded by Alzheimer’s UK, the researchers used anonymised data from the UK Clinical Practice Research Database (CPRD) on more than 1.8 million UK adults aged over 40 who had a blood cholesterol measurement between 1992 and 2009, with a follow-up period up to 23 years or until dementia diagnosis. They were able to calculate the risks of subsequent dementia and Alzheimer´s disease for blood total cholesterol, LDL cholesterol, HDL cholesterol and triglycerides, adjusting for other factors.

Due to the large cohort size, the researchers were able to focus on blood cholesterol measurement taken in middle age (under 65s) who have less disease, and with a follow-up of more than 10 years to avoid bias resulting from a long silent period when the pathology is present but symptoms are clinically absent or vague.

These results were not attributed to body mass index, the use of statins, or APOEε4 allele – a gene variant associated with both increased LDL cholesterol and increased risk of dementia.

The researchers therefore call for LDL cholesterol to be added to the few potentially modifiable risk factors for dementia and Alzheimer’s disease.

Study lead, Dr Nawab Qizilbash, Senior Clinical Epidemiologist at OXON Epidemiology and Honorary Associate Professor in Pharmacoepidemiology at LSHTM, said: “While the link between LDL cholesterol and dementia and Alzheimer´s disease is modest and found in people followed up from middle age for over 10 years, any modifiable risk factor is welcome for this huge, burgeoning and devastating disease. Most of the known risk factors are difficult to modify and convincing evidence that their modification can prevent dementia or Alzheimer´s disease is scarce. Likewise, long term follow-up (> 10 years) of randomized and non-randomized studies are needed to assess if the benefits of LDL cholesterol-lowering interventions – which greatly reduce coronary heart disease – may additionally reduce the risk of dementia or Alzheimer´s disease.”

Lead author, Dr Masao Iwagami, Assistant Professor at the University of Tsukuba and Honorary Assistant Professor in Epidemiology and Population Health at LSHTM, said: “Our study dwarfs in size all previous studies and provides really precise results. In people with cholesterol measured below age 65 the risk of dementia being diagnosed more than 10 years later was about 60% higher in those with LDL cholesterol levels above 200 mg/dL (5.17 mmol/L) compared to those with levels less than 100 mg/dL (2.6mmol/L). The strength of this association is comparable with other modifiable risk factors such as alcohol consumption and greater than for blood pressure.”

Stuart Pocock, Professor of Medical Statistics at LSHTM, said: "Alzheimer's disease and dementia are devastating diseases for both the individual and their loved ones, which 1 in 6 people over the age of 80 in the UK suffer from. This large study adds to our understanding of how our lifestyle can impact our risk of developing these diseases in later life, and to help inform potential preventative therapies to reduce this risk."

Hannah Churchill, Research Communications Manager at Alzheimer’s Society said: “We know that looking after your cardiovascular health is an important way to reduce your risk of developing dementia, as well as many other health conditions. However, the role that cholesterol plays in increasing your likelihood of developing dementia is less well understood. This large and robust study, funded by Alzheimer’s Society adds weight to the evidence there is the connection between high levels of particular types of cholesterol and the risk of developing dementia. It’s particularly pertinent given the scale of the study and the fact it analysed data across a considerable period of time.

“While it’s difficult to be sure from this study whether there is a causal link, studies like this can be used as a springboard to justify further research into whether managing your cholesterol levels in mid-life could reduce the risk of dementia in later life. Research will beat dementia, but our funding has been hit hard by the pandemic. We need public support now more than ever to help us continue our ground-breaking research that will make a world without dementia a reality.

The authors acknowledge limitations of the study including the lack of information on diet or physical activity so it was not possible to assess the influence of these factors on blood cholesterol and how it might affect the observed associations.