While fighting COVID-19, malaria has bitten back – what now?

Professor's Colin Sutherland and Sian Clarke, Co-Director's of the Malaria Centre at the London School of Hygiene & Tropical Medicine

Professor's Colin Sutherland and Sian Clarke, Co-Director's of the Malaria Centre at the London School of Hygiene & Tropical Medicine 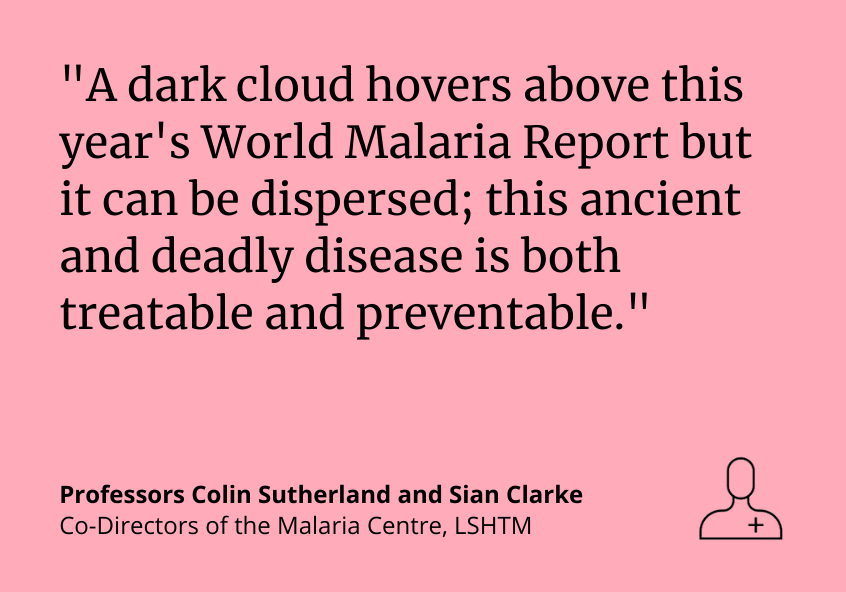 Over the last 20 years, annual analysis by the World Health Organization has brought good malaria news. Cases and deaths have steadily decreased since the turn of the millennium, although this progress has plateaued in recent years.

But things are very different in 2021.

This year’s World Malaria Report found deaths were at their highest for nearly a decade with an estimated 627, 000 worldwide in 2020.

Disruptions in the delivery of malaria services to those most in need contributed to a considerable increase in malaria cases and deaths, with about two thirds of additional malaria deaths (47,000) due to delays in the provision of malaria prevention, diagnosis, and treatment during the pandemic.

With the added threat of COVID-19, not only impacting populations but also supply chains and diagnoses, malaria is on the rise again. And whilst COVID-19 isn’t too dangerous for the world’s most vulnerable, malaria is, and it’s a much bigger killer than we thought.

For this report, the WHO used new statistical methodology to calculate deaths among children under five – providing a more precise cause-of-death metric for young children – which reveals higher numbers than previously reported. Even taking this into account, the new, adjusted figures make for a concerning trajectory, and it continues to be children who are hit the hardest.

WHO African region continues to shoulder the highest burden, with 96% of global malaria deaths in 2020, but the spread is becoming even more uneven. Countries with the highest burden of the disease are losing ground despite, before the emergence of COVID-19, taking a country-driven approach to redress the balance. This has been partially successful, with low-burden countries still progressing toward elimination and China and El Salvador receiving malaria-free status in 2021. There is a long way to go, but there is cause for optimism.

The ground-breaking approval of the first malaria vaccine, RTS,S, and the Global Alliance for Vaccines and Immunization (Gavi) agreement to fund it for US$ 155.7 million between 2022-2025 is a new weapon in our armoury, and will bolster existing interventions.

When used alongside seasonal malaria chemoprevention, RTS,S has potential to have greater impact, as shown by LSHTM and African partners’ recent work, reducing child hospitalisations and deaths by approximately 70% across the Sahel where malaria is seasonal.

However, alongside COVID-19, threats posed to malaria progress also include humanitarian emergencies caused by other infectious diseases such as Ebola, or by armed conflicts and natural disasters. The displacement of people in malaria-endemic areas makes it harder to deliver routine drug administration and leads to a rise in people living in temporary shelters which may not be adequately protected using indoor residual spraying or have access to bed nets.

Another reason why malaria has proven so difficult to defeat is down to its ability to evade our immune system and the development of drug resistance. This report detailed new and emerging challenges in the form of biological threats; increased resistance to insecticide treated bed nets, invasive vector species (Anopheles stephensi) in the Horn of Africa, and antimalarial drug resistance.

A dark cloud hovers above this new report but it can be dispersed; this ancient and deadly disease is both treatable and preventable. As we enter the third year of the pandemic, we need to redouble our efforts to ensure cases don’t rise any further and we are adaptable to the new challenges faced.

We’ve seen that with increased funding, new effective tools emerge. So now is the time for funders, governments, and the global health community to reinvigorate the response to malaria. Millions of children’s lives depend on it.