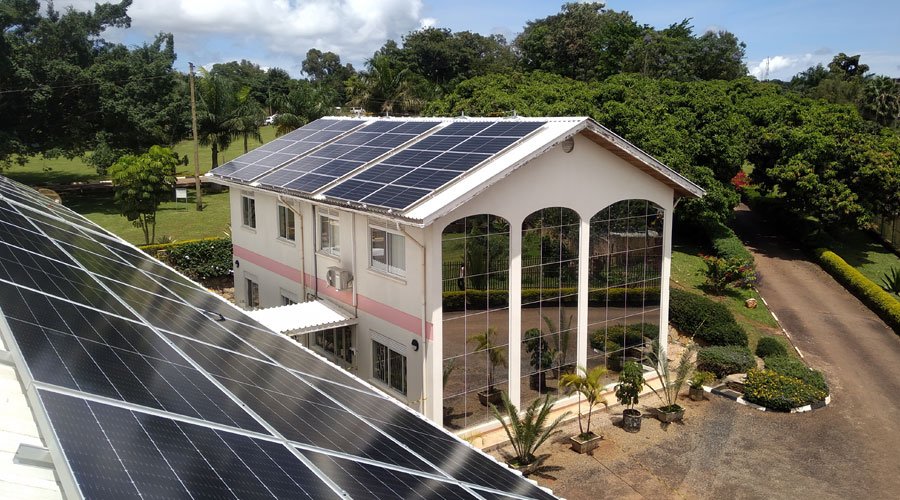 The Medical Research Council/Uganda Virus Research Institute and London School of Hygiene & Tropical Medicine Uganda Research Unit have unveiled solar photovoltaic (PV) systems across three field stations in Entebbe, Masaka, and Kyamulibwa. They were planned and installed with the non-profit organisation Azimut360, and with the support of a £750,000 grant from the MRC.

The solar power system will allow all three sites to harness the sun’s energy and convert it to electricity used directly by their internal electrical systems. These are part of a long-term strategy to become environmentally and financially sustainable, and plays an important role in LSHTM’s progress towards achieving net zero carbon emissions by 2030.

470 kWp of PV capacity were installed across the sites, which can generate up to 688,569 kWh per year. This equals the average annual energy consumption of about 1,627 Ugandan households, saving 124,116 kg CO2 every year.

This will create a significant reduction in CO2 and decrease reliance on power from the grid, while also improve human health by increasing air quality through reduced use of air-polluting generators.

The solar panels will also offset 30% of the MRC/UVRI & LSHTM Research Unit’s energy consumption, saving approximately £43,000 per year. These savings will be re-invested in world-leading scientific research for control of infectious diseases and health improvement in Uganda.

Alongside this investment in greener infrastructure, the MRC/UVRI & LSHTM unit has pledged to do more to reduce energy demand, review and rationalise energy consumption and implement further energy efficiency measures. The Unit will also bid for further funding to expand solar power infrastructure in Uganda and across other units in Africa.