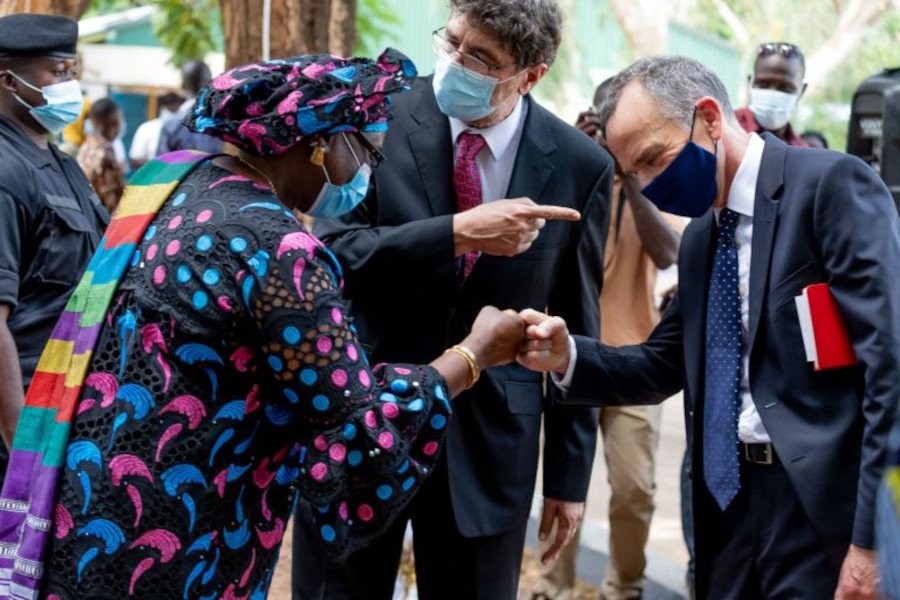 The newly-appointed Director of the London School of Hygiene & Tropical Medicine (LSHTM), Professor Liam Smeeth, has concluded his first visit to the Medical Research Council Unit The Gambia at LSHTM since his appointment in August 2021.

The visit aimed at strengthening the relationship between the LSHTM and the MRCG at LSHTM, ensure even stronger scientific collaborations, as well as map out the best ways to support the Unit.

As part of his visit, Professor Smeeth joined the Vice President of the Republic of The Gambia, Dr Isatou Touray, to inaugurate the Unit’s new Molecular Biology Laboratory in Fajara.  He described the new laboratory as a statement of intent that has placed the Unit in a very strategic position to be a centre of excellence in research.

Professor Smeeth said, “I am very much impressed by the infrastructure, the expertise and the continued growing sense of the next generation of scientists from The Gambia and within the sub-region who are striving and building their careers at the MRCG at LSHTM.”

He also visited some of the field stations and project sites in Basse, Gambissara, Soma and Brikama, where he had an opportunity to meet Unit staff and collaborators, as well as learn about the various ongoing research projects.

The visit also included a tour of the main Unit campus in Fajara, with an opportunity to see and interact with staff at the laboratories, Clinical Services Department, Operations sections, and the COVID-19 diagnostics laboratory. Professor Smeeth also held meetings with various sections of the staff community including the Workers’ Union and the Equality, Diversity & Inclusion Committee. He delivered a special seminar to the Unit staff, focusing on the challenges to human health, and what research can offer.

Professor Smeeth shared his thoughts on the Unit’s vision and strategy: “It’s integral to what we are doing, and it’s very much in line with the things that are happening across the wider schools. Our mission is to contribute to health worldwide through research and training the next generation. The Unit’s track record is excellent, and it’s amazing to see how well it is responding to the changing world and continuing to tackle malaria and Tuberculosis (TB), whilst also embracing the changes that are happening around us such as climate change, the COVID-19 response and the emergence of non-communicable diseases.”

“I look forward to the Unit becoming the centre of excellence within the continent for training, collaboration and pioneering research in the West African sub-region and across the continent. With the first malaria vaccine just approved, The Gambia can be a real place to try and eradicate malaria”, he concluded.

The MRCG at LSHTM officially joined the LSHTM in February 2018. As host for the visit, Unit Director Professor Umberto D’ Alessandro described Professor Smeeth’s stay as a positive one that has provided the Unit an opportunity to discuss its vision, strategy and policies.

“The Unit has established collaboration with many institutions and with students from different countries. With the support of the LSHTM, we can further develop towards this vision to offer training and be a centre for excellence,” he added.