Innovative preventive strategies needed to reduce obesity in The Gambia

The results of a new study published in BMJ Open reveal that 1 in every 10 Gambian adults is overweight or obese, with a higher prevalence in women. Awareness-creation, discouraging harmful beliefs on weight, and promoting healthy diets and physical activity could significantly reduce the high burden of obesity in The Gambia.

Non-communicable diseases (NCDs) are increasing in sub- Saharan Africa (SSA) and account for 71% of all deaths, globally. They also account for 15 million premature deaths among adults aged 30–69 years, of which 85% occur in low- income and middle- income countries. If these trends continue, meeting the World Health Organization’s global NCD target of halting the rise of obesity by 2025 will be almost impossible.

Dr Bai Cham, Research Fellow on the Tobacco Control Capacity Program at the Medical Research Council Unit The Gambia at the London School of Hygiene & Tropical Medicine and colleagues conducted a nationwide cross-sectional health examination study to assess generalised and abdominal obesity and their associated risk factors among adults in The Gambia, using the WHO STEPwise survey methods.

The study used secondary analysis of a 2010 nationally-representative random sample of adults aged 25–64 years, with a target sample size of 5,280, out of which 4,111 responded. The analyses were restricted to non-pregnant participants with valid weight and height measurements (n=3533). 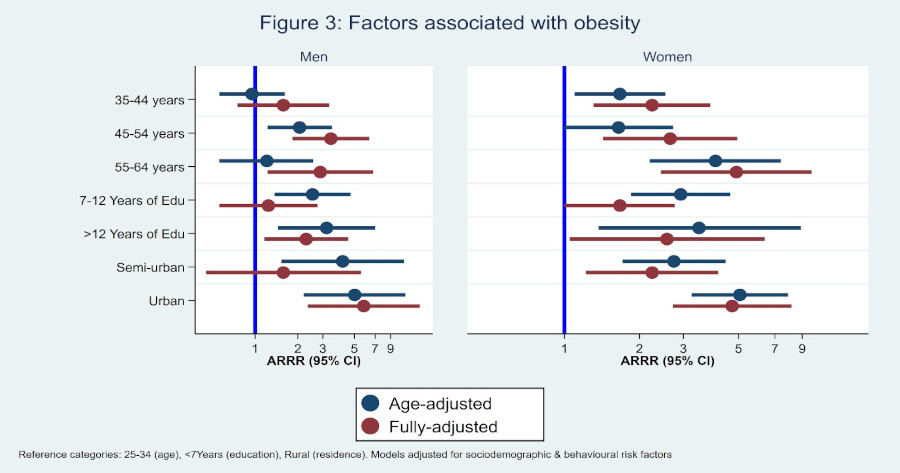 The study revealed that two-fifths of Gambian adults were overweight or obese. Obesity prevalence was higher in women (17%, 95% CI 14.7-19.7%; men 8%, 6.0-11.0%), while 10% of men and 8% of women were underweight. Urban residence, higher education, older age, and ethnicity were associated with obesity in men and in women; low fruit and vegetable intake was associated with obesity among men. While obesity rates in rural areas were lower than in urban areas, obesity prevalence was higher among rural residents in this study compared with previous findings. There is a prevailing belief in The Gambia, associating obesity with high socio-economic position and good health. Thus, preventive strategies should be directed at raising awareness to dispel these harmful myths and norms and promote healthy living.

Dr. Cham said, “ The findings of this study call for urgent policy action given the increasing prevalence of NCDs and their risk factors, as found in one of my related studies on hypertension using the same dataset. Obesity was found to be a major risk factor of hypertension in that study. There should be more research on diet and nutrition and the related socio-cultural factors associated with the acceptability of a high body mass index in The Gambian context. The Ministry of Health is running a project on “Diabetes and Hypertension Education, Prevention and Management” in six clinics and communities in Western Health Regions I and II funded by the World Diabetes Foundation. I believe the project should be scaled up to cover the whole country as NCDs and their risk factors are not only an urban problem but becoming an increasing burden in rural areas as well.”

The study is part of Dr Cham’s PhD research funded by the Islamic Development Bank, and was conducted in collaboration with the Ministry of Health in The Gambia and University College London in the United Kingdom.  Prof. Jennifer S Mindell, Professor of Public Health at the University College London said, “I am delighted that all of Bai's hard work and commitment during his PhD has resulted in yet another important publication”.

While the burden of underweight among Gambian adults may be decreasing, there remains a high prevalence of obesity. Preventive strategies should be directed at raising awareness on the importance of achieving and maintaining a healthy weight, discouraging harmful sociocultural practices and beliefs about weight, and promoting healthy diets and regular physical activity during leisure time, particularly in urban areas and among women.