4 November 2022 London School of Hygiene & Tropical Medicine London School of Hygiene & Tropical Medicine https://lshtm.ac.uk/themes/custom/lshtm/images/lshtm-logo-black.png
Dr Michelle Lokot, Co-Director of the Health in Humanitarian Crises Centre (HHCC), comments on the UK government’s duty to deal with overcrowding and poor conditions at the Manston asylum centre in the UK, and the wider problems with the government’s approach to asylum seekers. 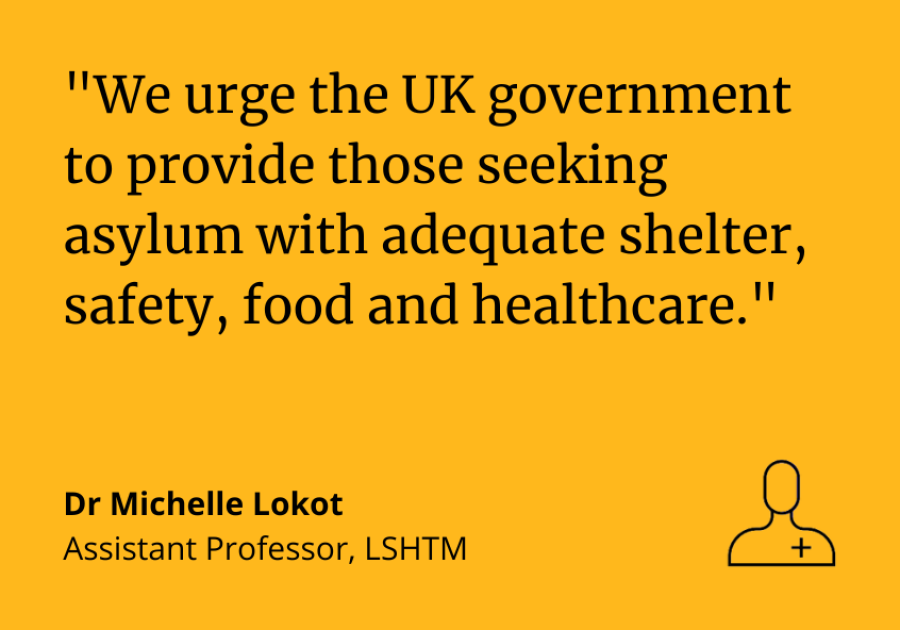 We have read this week, with growing alarm, the reports that the Manston centre in Kent, England, which is being used to “process” asylum seekers arriving in the UK, is overcrowded and unsafe.

The issues are countless. People are being detained for too long in squalid conditions at the centre, a former military base. While 24 hours should be the maximum stay at Manston, some report being unlawfully detained for weeks.

The centre has the capacity to “process” between 1,000 and 1,600 people a day. However, earlier this week, there were reports of up to 4,000 people being at the centre. This calls into question whether the UK government and Home Office are in breach of the law. Many reports have pointed to asylum seekers being removed from Manston and transported to other locations, such as London’s Victoria station, where they have been abandoned.

We are extremely concerned about the mental and physical health of those in the Manston centre. People arriving as asylum seekers in the UK have often lived through trauma, conflict and loss in their home countries and on their way to the UK. This will only be exacerbated by being detained for long periods of time in overcrowded conditions. The health implications of living in such environments can also be disastrous, with communicable diseases having the potential to spread quickly. We have already read reports of cases of scabies and diphtheria among those at the centre.

We believe the issue at Manston is indicative of wider problems with how the UK government is managing the increasing numbers of people crossing the Channel to seek asylum. This includes the government’s plan to send asylum seekers to Rwanda instead of fulfilling the UK’s obligations under the Refugee Convention.

Seeking asylum is not illegal. Using terms like “invasion” to describe people who are fleeing conflict is appalling and misleading. As outlined by the Refugee Council, the UK ranks only 18th highest in Europe in terms of the number of asylum applications per head of population. Failing to provide the most basic human rights to asylum seekers falls far too short of the commitments the UK has made under international law. It also falls short of the moral obligation to welcome people fleeing conflict and ensure their needs, including mental and physical healthcare, are met.

We urge the UK government to provide those seeking asylum with adequate shelter, safety, food and healthcare, and to expedite the process for reviewing asylum applications. We also urge politicians and the media to carefully consider the language being used to discuss these issues and to avoid language that misrepresents and scapegoats asylum seekers.