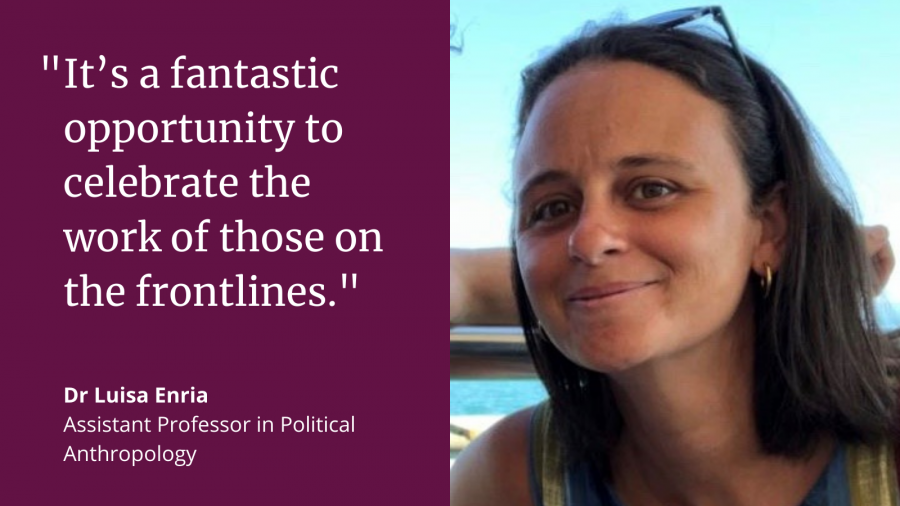 I was born in La Spezia in Italy

What inspired you to pursue a career in political anthropology?

It was not entirely intentional! My background is very interdisciplinary, although I was always interested in political questions. I wanted to answer these though not so much from the point of view of institutions but that of people’s lived experience, to understand how they create and imagine their political identities, community, and ideas of justice and how people experience and confront conflict and crisis in their everyday lives. Political anthropology gave the tools to do that. I was particularly attracted by the central role of storytelling in ethnographic research, as I think that stories are crucial to how we understand ourselves and each other.

Who inspires you and why?

On a daily basis, I am in awe of my research colleagues at LSHTM and in our team in Sierra Leone, it is really motivating to work with people who are so passionate about what they do and who are committed to making an impact on the world. More broadly, I am inspired by individuals and collectives who are working to imagine alternative ways of being in the world in the face of multiple crises, and I am trying to learn more about decolonial and convivial practices.

Your PhD was on the relationship between unemployment and political violence in post-war Sierra Leone. What were your main findings?

After the civil war in Sierra Leone (1991-2002) ‘youth unemployment’ was identified as a key challenge for consolidating peace. These narratives assumed a relationship between unemployment and the potential for violence amongst young people, but this was not always backed up by solid evidence. It also had unintended effects as it criminalised large swathes of the population, as young people out of work were seen as ‘ticking bombs’. I wanted to study qualitatively both the experience of being young and unemployed in post-war Sierra Leone and how this experience was related to various trajectories of political mobilisation. I did ethnographic research amongst young men and women in Freetown and found quite a complex picture-- violence was certainly not inherent to unemployment. Instead, I found that being excluded from the labour market had a range of social implications for young people’s identities and social norms and relations. This in turn affected their political subjectivities and different forms of mobilisation and efforts to assert their citizenship rights. For some, but by far not all, attempts to be included in the narrow networks of powerful ‘big people’ in some cases led to recruitment in violent networks. However, this did not negate a much broader political imagination rooted in claims for equitable access to decent work and social recognition.

You work on the Ebola Vaccine Trials (EBOVAC) since 2015-16. What are your main duties and what have been your main findings so far?

I was recruited to work in the trials right after I finished my PhD and I returned to Sierra Leone, this time to Kambia, In North-western Sierra Leone in the late spring of 2015. At that time, the vaccine trials were being set up in the final months of the West African Ebola outbreak. I was there initially for 14 months to help set up the social science research part of the project. This included recruiting and training a team of social science researchers and initiating a programme of research into community and participant experiences of the trial, perspectives on the Ebola crisis and its aftermath and ideas and practices for future preparedness. Shelley Lees, Anthony Mansaray, Rose Burns and I, alongside many others at LSHTM and the College of Medicine and Allied Health Sciences in Sierra Leone are still working on this now, which has allowed us to see a long-term trajectory of engagement with medical research. Our key findings are around motivations for joining trials, with a focus on hope, citizenship and notions of exchange, as well as lessons for effective community engagement. For me personally the most important finding has been about the importance of being closely attuned to political and economic dynamics in order to understand social experiences of clinical research—from exploring informal authority structures within communities to interpreting rumours as forms of political commentary.

You currently hold a UKRI Future Leaders Fellowship for the "Crisis of Confidence: the Politics of Evidence and (Mis)Trust in Epidemic Preparedness and Response" project. What does this project involve?

In this project I plan to study the political dimensions of negotiations over scientific evidence in efforts to respond to and prepare for epidemics. This includes studying how different ‘cultures of evidence’ come into contact in interdisciplinary collaborations and engagements between scientists and citizens in this particular field. I want to study this ethnographically by looking at everyday encounters between different ways of seeing and being in the world, for example in debates between anthropologists and epidemiologists or interactions between public health officials and citizens’ vaccination anxieties. In this I want to tease out the political dynamics of (mis)trust by looking at the kind of political identities and relations that emerge from these interactions and how different disciplines and perspectives influence each other. The project will involve research with people involved in different aspects interdisciplinary research collaborations and epidemic response interventions, a secondment to the Kambia District Health Management Team in Sierra Leone and, later, the development of further case studies.

I think I am probably proudest of the team of social scientists and the relationships we have collectively built through a decade of research in Sierra Leone. It’s been a huge privilege to be able to do this work over several years, as we could take the time to develop agendas together and do the groundwork to develop meaningful relations. I don’t know that we have always gotten it right, and there are a lot of challenges, including the power dynamics inherent in current frameworks for international research. However, I am proud of some of the things that have come out of these collaborations, for example as after a few years of discussion we set up a small project with the District Health Management Team to address an issue they were concerned with but they felt they did not have enough evidence on: vaccine confidence in the borderlands. With the DHMT we trained Community Health Workers to conduct ethnographic research in their own communities and to develop new engagement strategies around vaccinations based on their findings, which has been a fascinating learning process.

What would you say are the most relevant challenges in political anthropology in a context of humanitarian emergencies?

I think this applies more broadly to the role of the social science and particularly qualitative research in emergencies. Huge strides have been made in encouraging a recognition for these approaches to capture the social experience and perspectives of people affected in different ways by crisis and to understand them as integral, not additional, to how we make sense of epidemics and other emergencies. I think however there are still some outstanding difficulties for effectively integrating these perspectives in emergency response practices, and in operationalising social science findings in meaningful ways without depoliticising local experiences of and even resistance to interventions. This also requires challenging existing hierarchies of evidence in this field for more truly interdisciplinary work.

What lessons have you learned from your career journey so far?

The biggest lessons for me have been around both the challenges and value of meaningful collaboration. It can be hard work, and I still have a lot of listening and learning to do. But I think it also requires advocating for a radical restructuring of research and humanitarian environments for collaboration to be more meaningful and more just and to create more space for a range of experience, worldviews and knowledges to enrich this space.

What does World Humanitarian Day mean to you?

I think it’s a fantastic opportunity to celebrate the lives and work of those on the frontlines of humanitarian work. With lots of important discussions about (in)justice in the field of humanitarian practice going on, and the global challenges we face at the moment, I think this year it is particularly important to take is a time to reflect on the possible directions for the future of humanitarianism.

Where do you see yourself professionally in the future?

My career so far has taken many unexpected turns, so I can’t say for sure, but I hope to continue having the opportunity to learn from colleagues in research and practice across the world. I would also love to expand my research and return ‘home’ by bringing the lessons I have learned in Sierra Leone to do some comparative work in Italy.

What advice would you give to a student or young professional who wants to start or is starting a career in your field?

To find ‘your people’, that is those who inspire you not only in what they do but how they do it, as I think there are lots of different ways of being an academic. And to follow what motivates you and take risks if they offer opportunities to learn and expand your horizons.

What do you do in your spare time?

I read novels, watch true crime shows and I love food (cooking it but primarily eating it!)