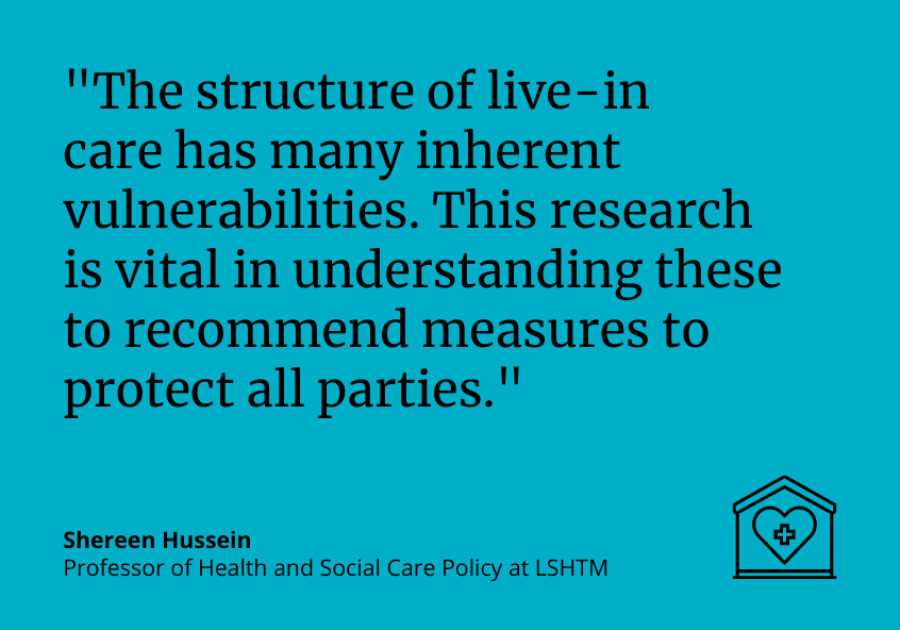 Paid, migrant, live-in care workers in London are at greater risk of falling victim to modern slavery, according to a new report.

The research was conducted by the London School of Hygiene & Tropical Medicine (LSHTM) in collaboration with the University of Nottingham, Focus on Labour Exploitation (FLEX), the Institute of Public Care, Oxford Brookes University and was funded by the charitable foundation, Trust for London.

The team involved live-in care workers themselves as peer researchers, giving them the opportunity to talk honestly about their experiences of coming to the UK to work and, for the first time, the chance to have their voices heard in debate around national policy.

Following an 18-month study into their working conditions, the report recommends policy changes to immigration law to reduce workers’ vulnerability to labour exploitation, particularly for those with a precarious immigration status. This included two major policy priorities, six policy options and three proposed sanctions and incentives to reduce vulnerability to labour exploitation. The recommended policy priorities include UK Visas and Immigration removing the obligation for care workers to update their visas when they move within the sector and the Home Office establishing a Memorandum of Understanding with labour market enforcement bodies to separate immigration control from labour inspection.

Dr Caroline Emberson, Nottingham Research Fellow in the Rights Lab and the Business School at the University of Nottingham, who led the research, said: “Female migrant workers take on live-in care roles often as a first point of entry into the UK labour market. Favourable exchange rates can make the salaries promised seem highly attractive. However, live-in carers can easily find themselves isolated in their clients’ homes and dependent upon agencies to ensure that the conditions of their employment are legal. These vulnerabilities can make this form of care work a honey-trap where the unscrupulous may entrap workers in exploitative situations.”

Shereen Hussein, Professor of Health and Social Care Policy at LSHTM, said: “The care ecosystem has been subjected to many shocks, including the pandemic and Brexit, leading to changes in the care landscape with increased demand for live-in care. Live-in care is an area of employment vulnerability and can be challenging to regulate.

“Live-in draws on a significant contribution of migrants, mainly women, who usually have many caring and financial responsibilities in their home countries and are likely to accept unfavourable conditions. The structure of this work has many inherent vulnerabilities. This research is vital in understanding these factors to recommend measures to protect all parties as this form of care expands.”

In the UK, there have been longstanding concerns about severe forms of exploitation in the care sector. Adult social care has been identified by the Director of Labour Market Enforcement as a sector where the danger of labour exploitation is high, with live-in and agency care workers believed to be at particular risk.

Despite this, the working lives of paid, live-in care workers, some of whom are circular migrants and many who are extremely isolated, have remained largely unexamined.

This study involved migrant care workers from Hungary, Poland, South Africa and Zimbabwe, most of whom were on zero-hours contracts when they first arrived in the UK and many of whom later went on to become self-employed.

Through interviews conducted by their peers, they identified five main risk factors to exploitation –  including employment status, business models, the role of intermediaries, and information asymmetry between care workers and intermediaries. Additionally, live-in case work is emotionally and physically intensive, with blurring of boundaries between work and private life, barriers to exercising rights at work, and individual risk and resilience factors.

They painted a vivid picture of difficulties around being able to open bank accounts, payslips that were unclear on the number of hours worked or tax paid and unscrupulous agencies that would deduct pay for accommodation charges, place novice carers with the most difficult clients that others declined to work with and would pay some carers at a higher rate or offer more favourable conditions for doing the same job.

Participants also spoke of the emotional pressure associated with being closely involved in the everyday lives of their clients and their families, including sleep deprivation from getting up in the night to offer care, not being able to get the breaks they were entitled to or being asked to run errands for their client in their own time. Others cited inappropriate behaviours including racism, xenophobia and sexual harassment and being made to carry out non-caring duties for the whole family including cooking, cleaning and gardening.

Despite this the participants interviewed all had a sense of awareness of the risks of exploitation and peer support. Being able to draw on advice and help from fellow care worked was highlighted as one of the ways they maintained their resilience in the face of these challenges.

Dr Agnes Turnpenny, from the Institute of Public Care at Oxford Brookes University, said: “Live-in care workers are the hidden workforce of social care. Many of them come from abroad and they do vital work to support people with extensive and complex needs to live at home. Our report highlights their lived experiences and the challenges they face in their jobs. It is important to listen to these and create safe and dignified conditions for this type of care work.”

Meri Ahlberg, from Focus on Labour Exploitation, said: “It is vital for policymakers to listen to the lived experiences of migrant live-in care workers so as to understand and actively mitigate the specific modern slavery risks affecting them. The need for care, including live-in care, will increase as the UK’s population ages, and much of this indispensable work will be done by people coming from outside the UK. It is our duty to ensure they can help fill these roles without compromising on their rights or safety.”

£1.7m funding boost for long-term collaborations to improve adult social care
Major study into the role of charitable funding of health care in the NHS
Cost of old-age social care should be shared between state and individual, says public
Learn More