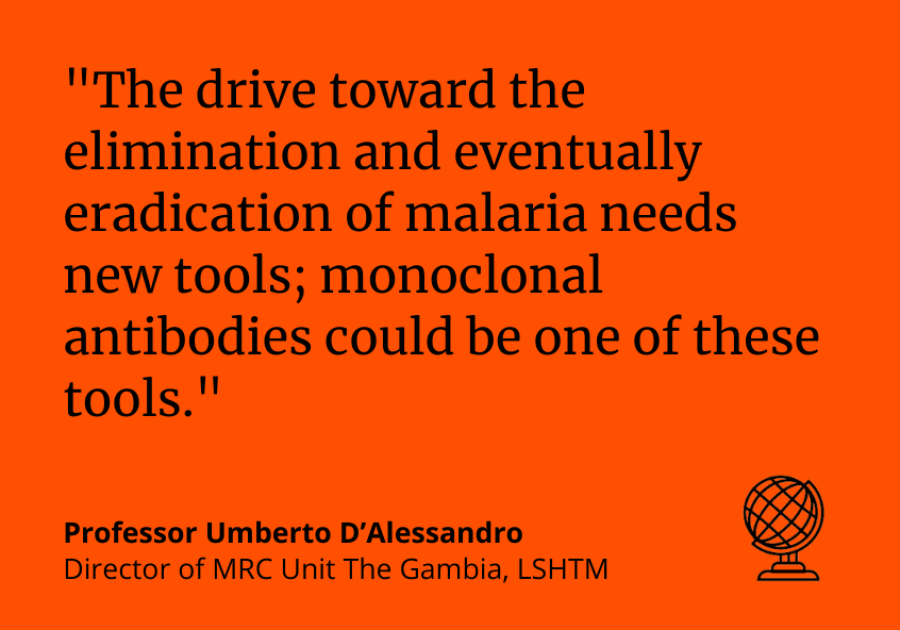 New research published in the New England Journal of Medicine gives promise of an alternative intervention to add to the existing arsenal against this deadly disease.

One dose of an antibody drug safely protected healthy, non-pregnant adults from malaria infection during the high transmission season, spanning six-months in Mali, Africa. The antibody was up to 88.2% effective at preventing infection over a 24-week period, demonstrating for the first time that a monoclonal antibody can prevent malaria infection in an endemic region.

Professor Umberto D’Alessandro, Director of the Medical Research Council Unit The Gambia at the London School of Hygiene & Tropical Medicine, comments on these findings:

“Currently available interventions for malaria control are unlikely to achieve the vision of a malaria-free world. The drive toward the elimination and eventually eradication of malaria needs new tools; monoclonal antibodies could be one of these tools. This trial provides proof of concept that monoclonal antibodies can protect against P. falciparum infection over a period of several months which is exciting news for the scientific community.

“Nevertheless, several issues should be resolved before monoclonal antibodies are included alongside the recently approved RTS,S vaccine and existing antimalarial drugs. A major one is the route of administration, which for this trial was intravenous. It is difficult to conceive the large-scale implementation of an intervention administered as a single intravenous infusion for 30 minutes – the speed and delivery of this method needs improvement. Furthermore, this study was carried out among healthy non-pregnant adults but the burden of malaria infection disproportionately rests on infants, children, and pregnant women, so further study is required to determine it’s efficacy among high-risk groups.”