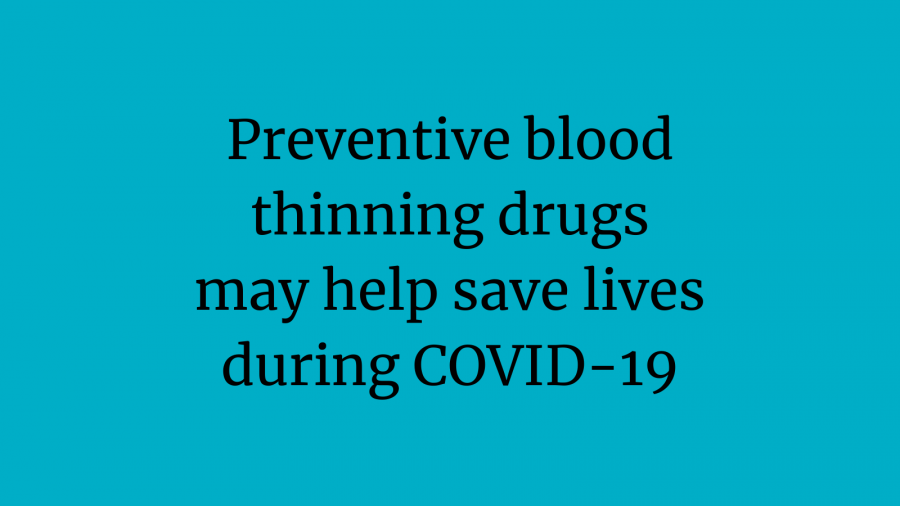 Patients given blood thinning drugs within the first 24 hours of being hospitalised with COVID-19 are about 30% less likely to die compared to those not put on anticoagulants, according to new estimates in the BMJ.

The study was led by researchers at the London School of Hygiene & Tropical Medicine (LSHTM), Vanderbilt University Medical Center, and the U.S. Department of Veterans Affairs (VA).

Using VA data, the team followed more than 4,000 patients hospitalised with COVID-19 between 1 March and 31 July 2020. 84% received prophylactic doses of anticoagulation within the first 24 hours of admission, among whom the high majority received the blood thinning drugs heparin or enoxaparin.

After thirty days, 14.3% of those who received prophylactic anticoagulation died, but the mortality rate for those who didn’t was higher, 18.7%. This is an absolute risk decrease of 4.4% or relative risk decrease of 27%. Importantly, giving patients anticoagulants was not associated with increased risk of serious bleeding events.

Christopher Rentsch from LSHTM and VA, and study co-lead author said: “Our study suggests prophylactic anticoagulation is safe and effective in treating patients hospitalised with COVID-19. As we await full reporting of ongoing clinical trials, these findings provide strong real-world evidence to support guidelines recommending the prophylactic use of blood thinning drugs as initial therapy upon hospital admission for COVID-19 patients.”

Deaths from COVID-19 have been partially attributed to the formation of blood clots that have led to more serious events, including lung failure, heart attack, and stroke. Anticoagulants, commonly known as blood thinners prevent the formation of these blood clots.

This was the catalyst for several expert organizations recommending the use of prophylactic anticoagulation for patients admitted with COVID-19, who do not experience harmful effects from the drugs, to reduce the risk of thromboembolism. Evaluations of the efficacy of prophylactic anticoagulation in COVID-19 patients in randomized clinical trials are underway, but have not yet been reported.

Previous observational studies investigating the role of anticoagulation among patients with COVID-19 have had varied results due to differences in how anticoagulation exposure was defined or who was included in the study. This new study was designed to emulate a clinical trial, and comprehensively accounted for reasons why people are given, or not given, anticoagulation.

The VA comprises more than 1,200 points-of-care nationally including hospitals, medical centres, and community outpatient clinics. Around nine million individuals access VA care each year, which, for most, is free-of-charge. It is the closest system the US has to the NHS.

The team looked at all individuals who were hospitalised with confirmed coronavirus infection and who did not have a contraindication to receiving prophylactic anticoagulation. The team then followed these patients to identify who died or experienced a serious bleeding event within 30 days after hospital admission.

The study found that the associated benefit appeared to be greater among patients who were not transferred to intensive care within 24 hours of hospital admission. The researchers say this finding is supported by recent evidence from other high-quality observational studies and interim results from three randomised clinical trials, all which have halted enrolment of patients in intensive care settings into their studies.

Christopher Rentsch said: “This work is further evidence that initiating prophylactic anticoagulation in earlier stages of severe COVID-19 provides greater benefit than initiating prophylactic or full-dose anticoagulation when critically ill. We eagerly await the results of ongoing clinical trials, particularly those investigating whether this therapy should be given to non-hospitalised people newly diagnosed with COVID-19.”

The researchers acknowledge limitations of their work, including that due to the observational nature of the study, a degree of uncertainty persists that can only be addressed through randomised trials. Also, women represented a small proportion (7%) of individuals in the sample.

The study was funded by the VA Health Services Research and Development and the National Institutes of Health.