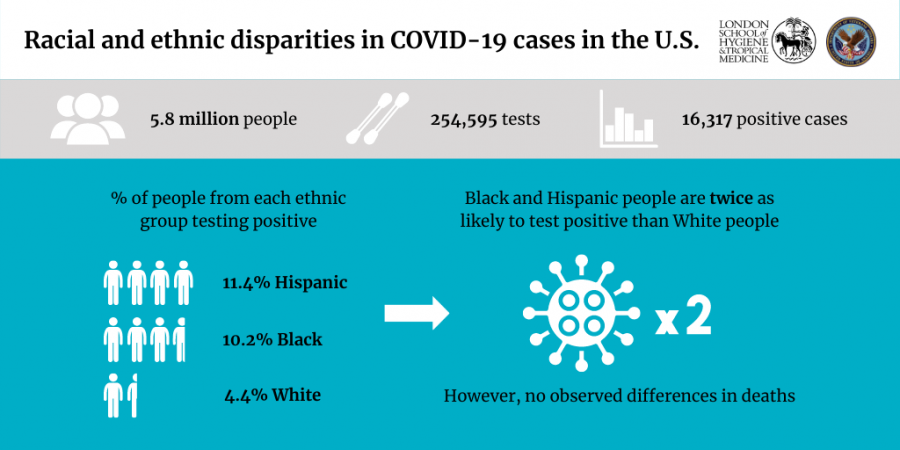 Individuals from Black and Hispanic backgrounds in the United States are twice as likely to test positive for COVID-19 than their White counterparts, according to new research in PLOS Medicine.

Led by researchers at the London School of Hygiene & Tropical Medicine (LSHTM) and Yale University, and the U.S. Department of Veterans Affairs (VA), the study found this disparity even after accounting for factors such as underlying health conditions, where they live and where they receive care.

However, the study, which used the health records of approximately six million people, did not find a race/ethnicity difference in the amount of people who died 30 days after testing positive.

The researchers say the findings highlight the urgent need for improved strategies to contain and prevent further outbreaks in racial and ethnic minority communities in the US, principally focused on testing and getting individuals into care.

Previous research in the UK, led by LSHTM, found that those from Black, Asian and minority ethnic backgrounds had a substantially higher risk of in-hospital death from COVID-19, while a study in the US found that Black individuals were overrepresented in coronavirus hospitalisations and deaths in a sample of 3,481 patients.

Christopher Rentsch from LSHTM and study lead author said: "Most studies investigating racial and ethnic disparities to date have focused on hospitalised patients, or have not characterized who received testing and those who tested positive. In this study, we compared patterns of testing and test results for COVID-19 and subsequent mortality by race and ethnicity in the Department of Veterans Affairs, the largest integrated healthcare system in the United States."

The Department of Veterans Affairs comprises more than 1,200 points-of-care nationally including hospitals, medical centres, and community outpatient clinics. Around nine million individuals access VA care each year, which for most is free-of-charge. It is the closest system the US has to the NHS.

The team looked at all individuals who were in care just prior to the coronavirus epidemic in the US. They then followed them to identify who was tested, who tested positive, and who died within 30 days after testing positive for COVID-19.

At each of these three stages they then looked to see if there were differences between three groups: Black, Hispanic, and White individuals.

Christopher Rentsch said: "Minority individuals who received a positive COVID-19 test did not appear to have worse outcomes. However, our findings suggest these communities face a substantial excess burden of COVID-19 infection."

The study also found substantial variation in the disparity between Black and White individuals in testing positive by geographic region, with stronger disparity observed in the Midwest than all other regions, and disparity most attenuated in the West.

The team weren't able to fully explain the reasons behind the disparities in their data. Previous reports have highlighted that members of racial and ethnic minorities are more likely to live in densely populated areas or multi-generational households, and work in essential industries, including high-contact jobs.

Christopher Rentsch said: "Understanding what is driving these disparities is vital so that strategies can be tailored to curb the disproportionate epidemics in minority communities.

"Going forward, we are exploring whether racial and ethnic disparities exist at other key stages in the clinical course of COVID-19, from hospitalisation to intubation. We appeal to other researchers who have the data to do so as well. This will provide essential information to design effective interventions."

The researchers acknowledge limitations of their work, including that the study used electronic health records, which did not include detailed data on socioeconomic status (e.g., type of employment, income, number of individuals in household) that may help explain some of the disparities they identified. Also, women represented a small proportion (9%) of individuals in the sample.

The study was funded by the National Institute on Alcohol Abuse and Alcoholism.