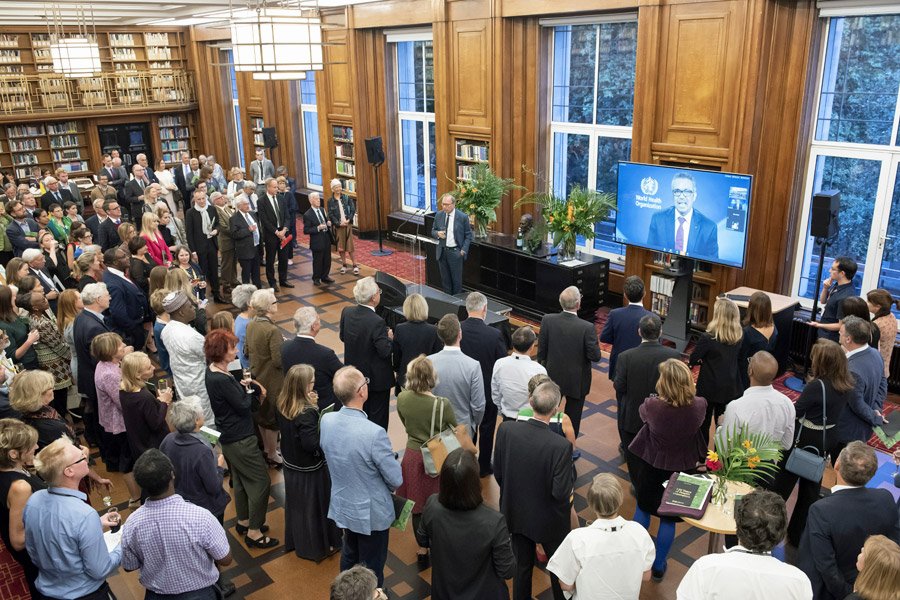 Speaking at a celebratory event in September, LSHTM Director Professor Peter Piot, said: “For 120 years, we have been at the forefront of innovative scientific research and health discoveries, whilst also providing research-led teaching in public and global health. Through our global presence and international partnerships, LSHTM has a proud history of innovation that has had a tangible impact on improving health and health equity, from creating the randomised control methodology and seminal work linking smoking and lung cancer, to impregnated bed nets for malaria control, and pioneering work on Ebola vaccines.”

“Our 120th anniversary is a momentous occasion which I hope will inspire us all to mobilise and challenge the status quo, applying creative new ideas and tools to generate new possibilities for improving health for all.”

Dr Tedros Adhanom Ghebreyesus, WHO Director-General, who completed an MSc in Immunology of Infectious Diseases at LSHTM in 1992, joined the event via video link. He said: “Nelson Mandela said that education is the most powerful weapon which you can use to change the world. That’s what this institution is doing every day; changing the world.”

Dame Sally said: “Antimicrobial resistance is a fight we’ve only just begun. I want to thank LSHTM for the support you’ve given me in learning how to do this fight. Because it’s not just about science, its politics. It’s about social movements. It’s about the alignment and sharing of agendas. You knew that and you helped me learn it, so that we as a nation can be more effective in this.”

Dr Moeti said: “One of the most important things I learned at LSHTM is about politics and social sciences in relation to health. When I had to sit and listen to lectures about social contexts, political contexts, developing policies, how decisions are made, it enabled me to do the work I am doing every day; negotiating the politics of public health.”

Jeremy Farrar, Director of the Wellcome Trust, added: “For 120 years the LSHTM has stood for excellence, honesty, diversity, inclusivity and has addressed the big issues facing us and our planet. It has not shied away from speaking truth to power and to societies around the world. This has never been more important and now is the time to step up, ask the critical questions, provide & use the best available evidence to argue for the things that can enhance lives, argue for the values that you stand for and the sort of world you believe in.”

“For 120 years, we have been at the forefront of innovative scientific research and health discoveries, whilst also providing research-led teaching in public and global health.”

As part of the 120th anniversary celebrations, LSHTM also received planning permission to add the names of three pioneering women in health to its historic Keppel Street building in London. Marie Skłodowska-Curie, Florence Nightingale and Alice Ball will be added to the frieze that wraps around the iconic building which currently just has the names of 23 male health and tropical medicine experts. LSHTM is also hosting 120 alumni events around the world to bring together our global community.

Highlights from some of LSHTM’s many historical innovations from LSHTM are highlighted in a special video for the anniversary.

More of our work can be discovered in the LSHTM historical timeline.