4 March 2020 London School of Hygiene & Tropical Medicine London School of Hygiene & Tropical Medicine https://lshtm.ac.uk/themes/custom/lshtm/images/lshtm-logo-black.png
Earlier evacuation of the Diamond Princess cruise ship during the onboard outbreak could have prevented many passengers and crew members from getting infected with COVID-19, according to new estimates published in the Journal of Travel Medicine. 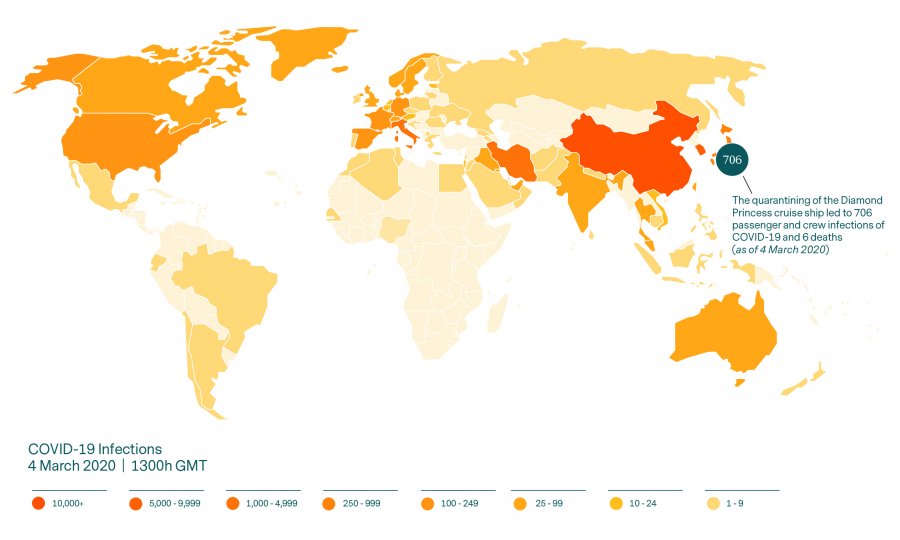 Of the more than 3,700 passengers and crew on the ship, 617 had become infected (17%) with the coronavirus by 19 February 2020. Led by the London School of Hygiene & Tropical Medicine (LSHTM), the study estimates if everyone had carried on as normal (not quarantined in their cabins) then 2,920 people would have been infected. However, if passengers had been evacuated when the outbreak was first detected, only 76 people would have been infected.

Professor Annelies Wilder-Smith from LSHTM and study lead author said: “My deepest sympathies are with all those affected by this new virus. COVID-19 does not respect borders, race or gender.

“With the Diamond Princess Cruise ship it’s easy to be wise after the event. Japanese health officials had an unprecedented situation on their hands. In many ways what they did was correct but of course, and Japan has admitted it themselves, their measures weren’t perfect. What’s important now is to learn from this event to ensure future effective control measures for COVID-19 are as strong as possible.”

Cruise ships carry large numbers of people in confined spaces. They are consistently interacting over a period of time that is longer than for any other mode of transportation. They therefore present a unique environment for increased transmissions of human-to-human infections.

On 3 February, 2020, an outbreak of COVID-19 had been reported on the Diamond Princess cruise ship off the Japanese coast. After docking near New Taipei City, on January 31, the ship arrived in Yokohoma, Japan. Initially, 10 people were confirmed to be infected with the virus. By 20 February, 619 passengers had become infected. The decision was made to evacuate and more than 3,000 passengers left the ship, mostly air-evacuated by their respective countries.

By 24 February, two of the passengers had died. The following day, the Japanese health ministry ordered a 14-day quarantine for everyone on the ship and rushed to close its ports to all other cruise ships.

The public health measures exacted by Japan included the removal of all confirmed COVID-19 positive passengers and crew from the ship for isolation in Japanese hospitals, while passengers and crew that tested negative remained on board. Quarantined in their cabins, they were only allowed out of the cabin for one hour per day.

In this study the research team applied well established mathematical models to estimate the basic reproduction number under cruise ship conditions, first for the time period before quarantine was implemented, and then for the time period of the quarantine. They also modelled the effectiveness of the Diamond Princess quarantine and removal interventions. They then compared this with what may have happened if there had been an earlier and later evacuation of the ship.

Professor Annelise Wilder-Smith said: “Our research has shown two things: Evacuation must happen quickly, and full quarantine is essential - people in lockdown must not mingle. In Europe we need a change in mindset, and to potentially implement more draconian measures than we’ve probably ever seen in the continent. For a disease that is spread in the community, we need a community response.”

The authors acknowledge limitations of the study including the fact that they only studied human-to-human transmission and not via objects likely to carry infection.

Read the latest expert comment and analysis on coronavirus from LSHTM researchers in our media highlights. Find out about our latest COVID-19 research and other activites at lshtm.ac.uk/coronavirus. Subscribe to LSHTM Viral, a new global health podcast focusing on the science behind the coronavirus outbreak and global response.

In episode 13 we speak to Professor Annelies Wilder-Smith about her new paper exploring the success and failures of quarantining the Diamond Princess cruise ship.