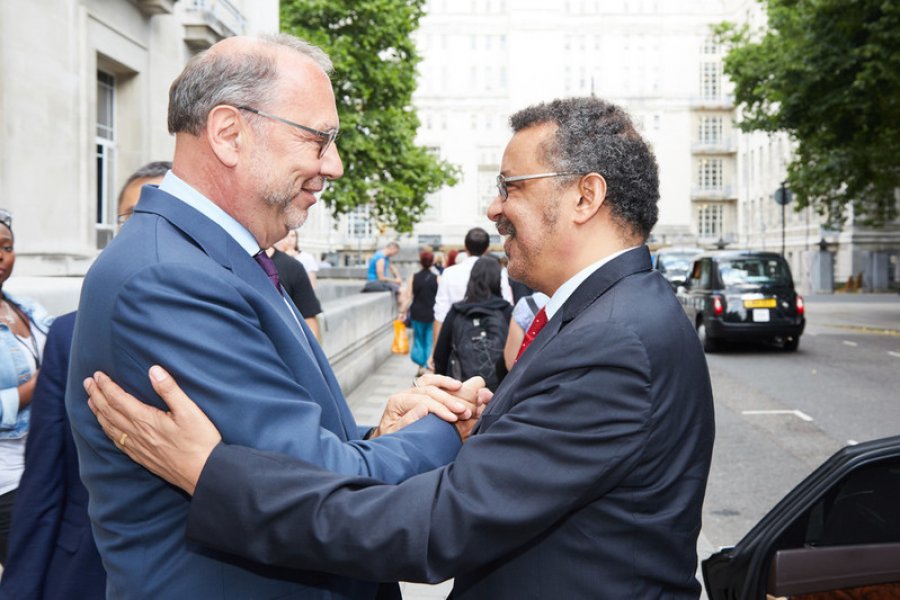 Professor Peter Piot has steered the London School of Hygiene & Tropical Medicine (LSHTM) through an unprecedented period of major global health crises such as Ebola and COVID-19 during his 11 years at the helm.

Living and breathing LSHTM’s mission to improve health worldwide – and building on his previous experiences tackling HIV/AIDS ­– his rallying calls for tangible action to save lives in the face of disease and pandemics have inspired people to sit up, listen and act.

Professor Piot fully supported colleagues who wanted to contribute to the relief effort during the 2014 Ebola outbreak in West Africa and around 400 members of LSHTM staff volunteered to assist in the epidemic response. Today, LSHTM experts continue to be at the forefront of the response to COVID-19.

Under Professor Piot’s leadership, LSHTM’s reputation, profile and influence in global health has soared. An expansion of strategic partnerships around the world since he started as Director in 2010 has seen LSHTM grow and thrive, strengthening our impact on improving health and health equity worldwide. This included the successful integration of the Medical Research Council Units in The Gambia and Uganda, firmly establishing LSHTM as a truly global institution. The School’s income and staff more than doubled, and over half of LSHTM staff are now based outside the UK, mostly in Africa, but also in Asia and Europe.

He has inspired countless students and established new education programmes and centres, helping to train up the next generation of scientists and future health leaders. He also spearheaded the addition of the names of women pioneers of medicine to join the 23 men on the historic frieze around the LSHTM’s Keppel Street building as part of 120th anniversary celebrations.

Leading figures in global health from Bill Gates to alumnus Tedros Adhanom Ghebreyesus joined colleagues to honour his achievements and celebrate the breadth of LSHTM’s partnerships around the world at a symbolic handover symposium from Professor Piot to incoming Director, Professor Liam Smeeth.

Although retiring as Director, Professor Piot will continue with research activities at LSHTM in his role as Handa Professor of Global Health, in addition to various advisory roles , including as Special Advisor to Ursula von der Leyen, President of the European Commission.

In recognition of the legacy of his work, LSHTM has established the Peter Piot Fellowships for Global Health Innovation. They will provide early career opportunities to outstanding candidates from sub-Saharan Africa to focus on either Planetary Health or Epidemic Preparedness and Response.

Professor Piot said: “I've been extremely lucky to work with such committed people and I am grateful to everyone who has helped us pursue our mission.

“This is a remarkable institution with unmatched dedicated staff, students, and partners. In the face of today’s challenges, the global and multidisciplinary work of LSHTM is more relevant and needed than ever. I am pleased it’s going to be in such capable hands.”

Deputy Director and Provost Professor Dame Anne Mills said: “It’s been a huge privilege to work closely with Peter during his time as Director.

“His vision and networks have expanded our horizons and built on our pre-existing strengths in research collaborations across the world to leave a lasting legacy. Over the last 11 years, our partnerships have become embedded in how we function as an institution.“

“They are core to the development of our UK and global reputation, and to our contribution to the world.”

Don Robert, Chair of the Council of LSHTM, said: “Peter's leadership has been transformational, propelling the School to thrive in so many ways.

“We are honoured to have had Peter at the helm to take LSHTM into so many significant partnerships and strategic developments with tangible benefits for global health. We thank him and wish him all the best.”

He added: “We welcome Liam Smeeth, whose combination of academic and clinical expertise perfectly places him to take forward our world-leading research and education programmes, together with our global partners.”

Professor Smeeth said: “Peter’s contributions to LSHTM have been extraordinary. I thank him for all he has done through challenging times for global health ­– for his humanity, passion and dedication.

“He’s a tough act to follow but I am looking forward to the future and starting the next chapter with our partners around the world.”