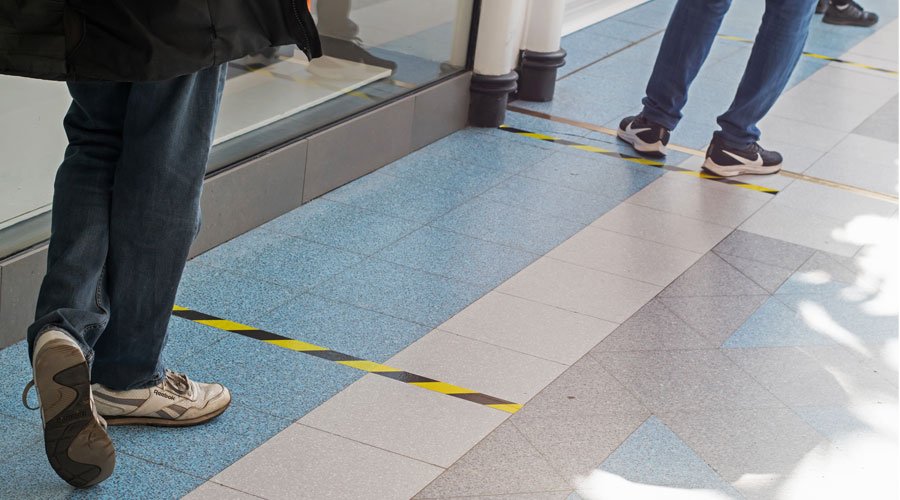 In the absence of a vaccine or highly effective treatments for COVID-19, combining isolation and intensive contact tracing with physical distancing measures—such as limits on daily social or workplace contacts—might be the most effective and efficient way to achieve and maintain epidemic control, according to modelling research published in The Lancet Infectious Diseases.

Using social-contact data on more than 40,000 individuals from the BBC Pandemic database to simulate SARS-CoV-2 transmission in different settings and under different combinations of control measures, the researchers estimate that a high incidence of COVID-19 would require a considerable number of individuals to be quarantined to control infection.

For example, a scenario in which 5,000 new symptomatic cases were diagnosed each day would likely require 150,000–200,000 contacts to be quarantined every day if no physical distancing was in place.

The study is the first time researchers have used social contact data to quantify the potential impact of control measures on reducing individual-level transmission of SARS-CoV-2 in specific settings. They aimed to identify not only what would theoretically control transmission, but what the practical implications of these measures would be in terms of numbers quarantined.

However, the researchers note that the model is based on a series of assumptions about the effectiveness of testing, tracing, isolation, and quarantine—for example about the amount of time it takes to isolate cases with symptoms (average 2.6 days) and the likelihood that their contacts adhere to quarantine (90%)—which, although plausible, are optimistic.

Dr Adam Kucharski, Associate Professor at the London School of Hygiene & Tropical Medicine, said: “Our findings reinforce the growing body of evidence which suggests that we can’t rely on one single public health measure to achieve epidemic control. Successful strategies will likely include intensive testing and contact tracing supplemented with moderate forms of physical distancing, such as limiting the size of social gatherings and remote working, which can both reduce transmission and the number of contacts that need to be traced.”

He adds: “The huge scale of testing and contact tracing that is needed to reduce COVID-19 from spreading is resource intensive, and new app-based tracing, if adopted widely alongside traditional contact tracing, could enhance the effectiveness of identifying contacts, particularly those that would otherwise be missed.”

In the study, researchers analysed data on how 40,162 people moved about the UK and interacted with others prior to COVID-19 to simulate how combinations of different testing, isolation, tracing, and physical distancing scenarios—such as app-based tracing, remote working, limits on different sized gatherings, and mass population-based testing—might contribute to reducing secondary cases.

They also modelled the rate at which the virus is transmitted—known as the reproductive number (R), or the average number of people each individual with the virus is likely to infect at a given moment—under different strategies. To keep the COVID-19 epidemic declining, R needs to be less than 1.

In the model, the secondary attack rate (the probability that a close contact of a confirmed case will be infected) was assumed to be 20% among household contacts and 6% among other contacts. The researchers calculated that, had no control measures been implemented, R would be 2.6—meaning that one infected person would infect, on average, 2–3 more people.

The model suggested that mass testing alone, with 5% of the population undergoing random testing each week (i.e. 460,000 tests per day in UK), would lower R to just 2.5, because so many infections would either be missed or detected too late (table 3 and infographic).

Compared with no control measures, self-isolation of symptomatic cases (at home) alone reduced transmission by an estimated 29% (lowering R to 1.8); whilst combining self-isolation, household quarantine, and tracing strategies could potentially lower transmission by as much as 47% (R 1.4) when using app-based contact tracing (assuming the app is adopted by 53% of the population), and by 64% with manual tracing of all contacts (R 0.94).

Achieving such a thorough level of contact tracing may be impractical, but the new study suggests that a large reduction in transmission could also be achieved by supplementing with moderate physical distancing measures. For example, they estimate that, limiting daily contacts outside home, school, and work to four people (e.g. by restricting mass gatherings) along with manual tracing of acquaintances only (i.e. people they have met before) and app-based tracing, would have the greatest impact, reducing disease spread by 66%, and lowering Rto 0.87.

However, they note that the effectiveness of manual contact tracing strategies is highly dependent on how many contacts are successfully traced, with a high level of tracing required to ensure R is lower than 1, especially if it takes time to isolate symptomatic cases.

The researchers also modelled the number of contacts that might need to be quarantined under different contact tracing strategies. They estimate that a scenario in which 1,000 new symptomatic cases were reported daily would likely require a minimum of 15,000 contacts quarantined every day (isolation plus app-based testing) and a maximum of 41,000 (isolation plus manual tracing all contacts). This could increase to an average of 150,000–200,000 contacts quarantined daily in a scenario where 5,000 new symptomatic cases were diagnosed each day.

Co-author Dr Hannah Fry from University College London, said: “Our results highlight several characteristics of SARS-CoV-2 which make effective isolation and contact tracing challenging. The high rate of transmission, the short time between one person becoming infected and infecting another, and transmission that occurs without symptoms all make things difficult.

“If there are a lot of symptomatic COVID-19 cases, then tracing, testing, and trying to quarantine a huge number of contacts will be a big challenge. How well we manage it will affect how and when it is possible to reduce transmission predominantly through targeted isolation and tracing measures or whether ongoing physical distancing measures will be required to control the epidemic.”

Co-author Professor Julia Gog from the University of Cambridge, added: “Planning for control based on isolation and contact tracing should consider the likely need for large numbers of cases to be tested and also a large number contacts rapidly quarantined. Crucially, this work is able to quantify the scales of what is needed for a successful control strategy involving tracing and isolation by making use of the dataset from the BBC pandemic project. The BBC data gives a uniquely detailed picture of how people in the UK mix and thus the extent of contact tracing necessary if we return to social mixing patterns as they were before the pandemic.”

The researchers highlight several limitations to their study, including that it did not consider more detailed settings beyond home, school, work, or ‘other’ categories, or explicitly include imported infections, which may be detected at a different rate to local infections.