Travel restrictions must be used in a targeted way to be effective at controlling local COVID-19 transmission, modelling study suggests

8 December 2020 London School of Hygiene & Tropical Medicine London School of Hygiene & Tropical Medicine https://lshtm.ac.uk/themes/custom/lshtm/images/lshtm-logo-black.png
First study to assess the global impact of international travel restrictions on the pandemic suggests they may only be effective at controlling the spread of COVID-19 when applied in a targeted way, according to research published in The Lancet Public Health journal. 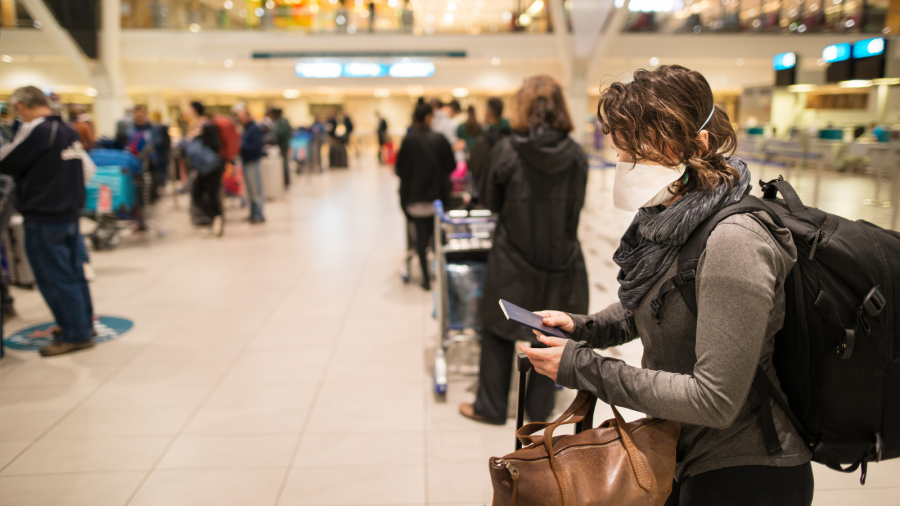 The measures may have limited impact on the epidemic within individual countries except those with low numbers of COVID-19 cases, or that have strong travel links with countries experiencing high rates of infection.

The new study also suggests that travel restrictions can be effective in countries close to a tipping point for exponential growth – with a reproduction number, or R number, between 0.95 and 1.05 –but not in those where the virus is already spreading rapidly among the population.

Every country in the world had imposed some form of travel restrictions – which have high economic and social costs – by late April 2020 as part of efforts to control the spread of the COVID-19. However, until now, no studies had produced global estimates of how the risk of importing cases relates to local transmission levels.

Findings from this study could enable policymakers to determine where travel restrictions will have a major impact on slowing local transmission, and where they will have little effect.

Professor Mark Jit from the London School of Hygiene & Tropical Medicine, who led the study, said: “We recognise that these measures carry a high economic and social cost, so it’s important that governments use travel restrictions in a targeted way. Before introducing restrictions, they should take into account local infection figures, epidemic growth rates, and the volume of travellers arriving from countries heavily-affected by the virus.”

The authors used detailed flight data to compare the number of expected COVID-19 cases arriving from international flights (assuming no travel restrictions) with the number of infections arising from transmission within individual countries. The authors produced estimates of international travellers in May and September 2020 based on two scenarios.

One scenario used flight data for the same months in 2019 (assuming no reduction in travel numbers) and the other scenario was based on the expected reduction in passenger numbers. Numbers of COVID-19 cases and infection rates were estimated using a mathematical model that adjusts recorded cases to take account of asymptomatic and unreported infections.

Results were determined based on how imported COVID-19 cases would affect local epidemic growth rates, using country-specific R number estimates. Where imported cases accounted for more than 10% of infections within individual countries, they were considered to have a major impact on growth of the epidemic. The work estimated that when imported cases accounted for less than 10%, their impact on the growth of the epidemic is usually small, while those below 1% would have an almost undetectable effect on epidemic size. Publicly available country-specific R number estimates were used to identify countries close to their tipping point for exponential growth (R number between 0.95 and 1.05).

The findings indicate that international travel restrictions were most effective at limiting local transmission of the virus during earlier stages of the pandemic. This is because imported cases led to outbreaks in countries with very few – or no – existing cases.

The authors conclude that recommendations about international travel restrictions should not be applied uniformly. Countries must first consider local infection figures and epidemic growth rates, as well as the volume of travellers arriving from countries heavily-affected by COVID-19. For instance, in September 2020, the measures would be effective in New Zealand and China because the virus had been supressed to such low levels in both countries that the expected number of imported cases is similar to the local rate, meaning arrivals could trigger a new local wave of infections.

The authors acknowledge limitations of their study, including that estimates produced in the study assume that the COVID-19 rate among international travellers was the same as the general population of their country of origin. However, infected arrival rates are likely to be lower because people with symptoms are less likely to travel in the first place, and those who do may be detected during routine screening. People in the incubation period while traveling may develop symptoms and be detected, or self-declare illness upon arrival to their destination. This could mean that the number of imported COVID-19 cases that would occur without travel restrictions is overestimated in this study.

The authors also assessed only international flight data, meaning their analysis may not accurately capture the risk of COVID-19 spreading between countries with high volumes of land traffic (such as rail and road travel between countries in continental Europe).