Sexual satisfaction among older people about more than just health 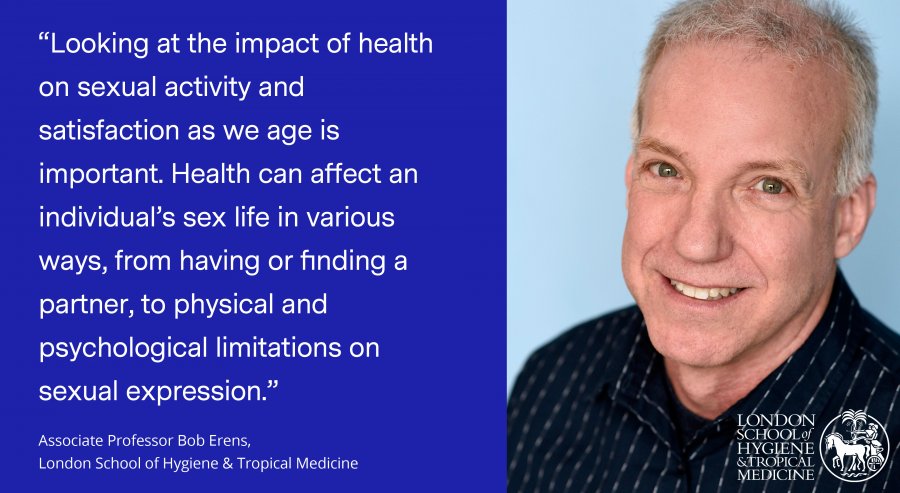 Communication and being in a happy relationship, along with health, are important for sexual satisfaction among older people, according to new research published in PLOS ONE.

Sexual expression is increasingly recognised as important throughout the life course, in maintaining relationships, promoting self-esteem and contributing to health and well-being. Although health care professionals are being urged to be more proactive in helping older patients achieve a satisfying sex life, there is a distinct lack of evidence to help guide practitioners.

Led by the London School of Hygiene & Tropical Medicine (LSHTM), the University of Glasgow and UCL, the study is one of the first to look at how health, lifestyle and relationship factors can affect sexual activity and satisfaction in later life, and examine how people respond and deal with the consequences.

The researchers carried out a mixed methods study combining survey data from the third National Survey of Sexual Attitudes and Lifestyles (Natsal-3) and in-depth interviews with older men and women. Out of nearly 3,500 people aged between 55-74, the survey found that one in four men and one in six women reported having a health problem that affected their sex life. Among this group, women were less likely than men to be sexually active in the previous six months (54% vs 62%) but just as likely to be satisfied with their sex life (42% vs 42%).

Follow up interviews with a sample of participants revealed that older people found it difficult to separate the effects of declining health from those of increasing age. Ill health impacted sexual activity in many ways but most crucially it influenced whether individuals had a partner with whom to have sex. Some older people were more accepting of not having a sex life than others.

For those in a relationship, sexual satisfaction was strongly associated with both the quality of communication with their partner and contentment with their relationship. The impact of health issues was not always negative; some men and women found themselves having to experiment with new ways of being sexually active and their sex lives improved as a result.

Natsal-3 is the largest scientific study of sexual health and lifestyles in Britain. Conducted by LSHTM, UCL and NatCen Social Research, the studies have been carried out every 10 years since 1990, and have involved interviews with more than 45,000 people to date.

Bob Erens, lead author and Associate Professor at LSHTM, said: “Looking at the impact of health on sexual activity and satisfaction as we age is important, however few studies have examined the relationship between the two.

“Health can affect an individual’s sex life in various ways, from having or finding a partner, to physical and psychological limitations on sexual expression.

“We identified that not many people who reported experiencing problems or lack of satisfaction sought help. Although this could be an individual choice or because of a perceived lack of support, it is vital that individuals feel able to make enquiries with health care professionals. In particular, discussing problems can often lead to identification of underlying medical conditions.”

Although some individuals the research team spoke to were not affected by not being sexually active, it seemed to be important that health professionals make sensitive enquiries for patients who might want to access help, which can lead to significant improvements in their wellbeing and quality of life.

Kirstin Mitchell, co-author and Senior Research Fellow in Social Relationships and Health Improvement at the University of Glasgow, said:

“We’re seeing numerous, interconnected factors influencing sexual activity in older people. Not being in good health can influence mood, mobility and whether a person has a partner, which in turn impact on sexual activity. Medication taken for health conditions often compounds the problem.

“The study findings suggest that pharmacological approaches, like Viagra, do not always help  to resolve sexual difficulties, which need to be seen in the wider context of older people’s lives.”

The authors acknowledge the limitations of the study, including that Natsal had an upper age limit of 74 years, and so the study is unable to describe the sexual health and wellbeing of people at older ages.

Natsal-3 is the largest and most comprehensive study of sexual attitudes and lifestyles in the world, and is a major source of data informing sexual and reproductive health policy in Britain. Natsal-3 was funded by the Medical Research Council and the Wellcome Trust, with additional funding from the UK Research and Innovation and Department of Health and Social Care.

Funding boost to help improve sexual health in Britain
The National Survey of Sexual Attitudes and Lifestyles
Sex in the UK: how culture and society can define your sexual health
Readiness for first sex is about more than age for many young people in Britain
Learn More