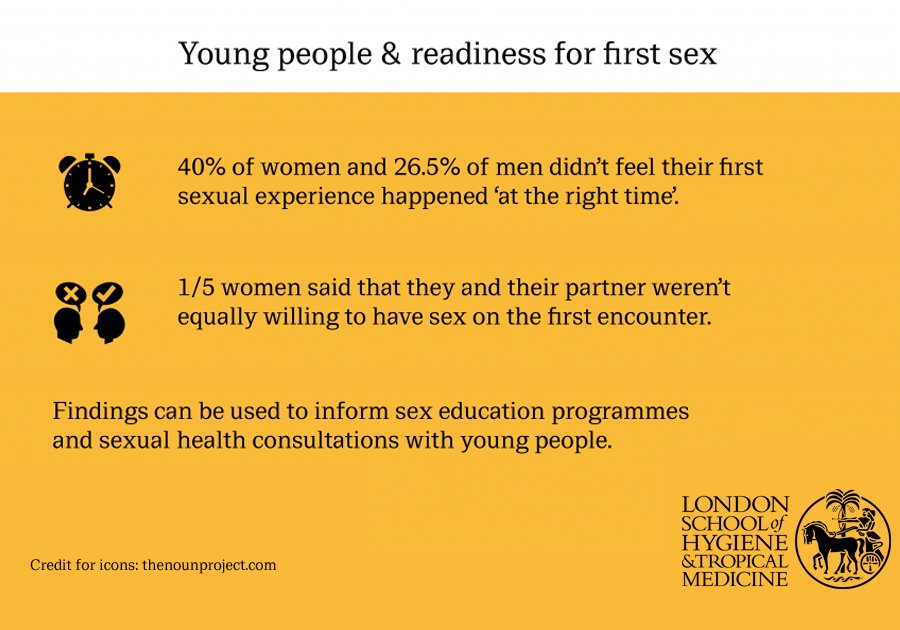 A substantial proportion of young people in Britain are not ready for their first sexual activity - whatever their age - and lose their virginity under circumstances that are incompatible with positive sexual health, according to a new study published in the BMJ Sexual & Reproductive Health.

Led by the London School of Hygiene & Tropical Medicine (LSHTM), the study is the first to look at the conditions of first sex among young people. It found that rather than focusing on the age at which a young person starts having sex, a much more nuanced approach is needed to this key milestone, in recognition of the fact that young age alone doesn’t threaten sexual health any more than older age safeguards it.

The study’s authors say that better understanding first sex among young people and the situations in which it occurs can help inform sex education programmes.

The researchers used data from the third National Survey of Sexual Attitudes and Lifestyles (Natsal-3), one of the largest scientific studies of sexual health and lifestyles in Britain. Conducted by LSHTM, University College London and NatCen Social Research, the studies have been carried out every 10 years since 1990, and have involved interviews with more than 45,000 people to date.

In the study 2,825 sexually experienced 17 to 24-year olds were asked about their experience of losing their virginity. The questions aimed to gauge their level of ‘sexual competence,’ defined as consent; autonomy; contraceptive use; and readiness.

Questions covered whether both partners had been equally willing to have sex; whether the decision had been autonomous, and not due to external factors, such as drunkenness or peer pressure; whether they felt it had been the ‘right time’ to have sex; and if a reliable method of contraception had been used.

Only respondents who answered yes to all four domains were deemed sexually competent.

Background information on deprivation; educational attainment; and contextual factors, such as the nature of the relationship, age of both partners, and the previous sexual experience of the other partner were also explored.

Analysis of the responses showed that nearly four out of 10 women (just under 40%) and around one in four men (26.5%) didn’t feel that their first sexual experience had happened ‘at the right time.’

Melissa Palmer, lead author from LSHTM, said: “Examining the circumstances around first heterosexual intercourse is important for planning and targeting public health interventions to improve the conditions of first sex for young people.

“Interestingly, our findings suggest that inequalities in sexual health are not just reflected in common indicators such as sexually transmitted infections and unplanned pregnancies. They are also reflected in the experience of first intercourse, for example young men living in deprived areas were more likely to report negative conditions of first intercourse, suggesting that disparities exist from the very onset of sexual activity.

“Although the survey results yielded some positive outcomes, such as nearly nine in 10 young people using a reliable method of contraception at first sex, further efforts are required to ensure that the broader wellbeing of young people is protected as they become sexually active.

“This highlights the importance of comprehensive Relationships and Sex Education, which equips young people with the negotiation and communication skills enabling them to have safe and positive first sexual experiences.”

Although increasing age was associated with sexual competence, it didn’t explain all of the variability as sexual competence didn’t come close to zero or 100% at any age. This suggests that age may be an overly simplistic indicator of the nature of first intercourse.

Kaye Wellings, senior author from LSHTM, said: “Age is often used as a determinant of readiness for sex. The problem with this measure is it assumes every young person is the same, that they will all wake up on their sixteenth birthday equipped with the qualities that will enable them to have safe and satisfying sexual experiences.

“Our findings show this isn’t the case. Every young person is different - some 15 year olds may be ready while some 18 year olds are not.

“The features of first sexual intercourse that we’ve shown to be important to the quality of the experience, such as consensuality, autonomy and protection against unintended pregnancy and infection, are all easily conveyed to young people through effective sex education. This can help them to choose an optimal time and situation for becoming sexually active.

“Going forward we need to ensure sex education takes account of individual variation in readiness for sex - chronological age is only a rough and ready guide.  A more nuanced approach provides opportunities to tailor and target interventions more effectively.”

Those of black ethnicity (women) or living in deprived areas (men) were more likely to lack sexual competence, while young women who had discussed sex with their parents or who had received sex education at school were more likely to have been sexually competent when they lost their virginity.

However this wasn’t the case for men. The authors say this might be because communication and negotiation skills are less important for men to feel good about their ‘first time’. Alternatively it might be that school relationships and sex education needs to be more relevant to the needs of young men, they add.

The authors acknowledge the limitations of the study, including that as an observational study cause cannot be established, added to which the associations found may have been due to unmeasured or unknown factors.

Natsal-3 is one of the largest and most comprehensive studies of sexual behaviour and lifestyles in the world, and is a major source of data informing sexual and reproductive health policy in Britain. Natsal was funded by the Medical Research Council and the Wellcome Trust, with additional funding from the UK Research and Innovation and Department of Health and Social Care.