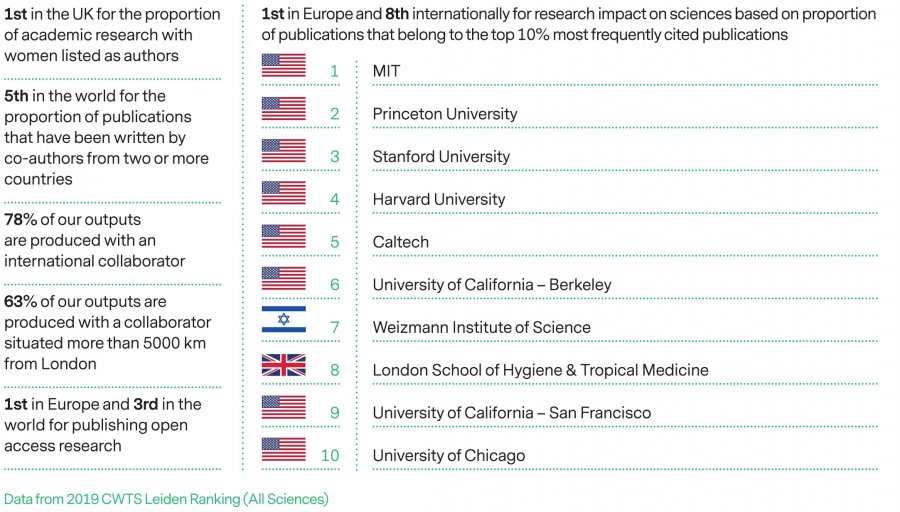 The London School of Hygiene & Tropical Medicine (LSHTM) has been ranked the UK’s top university for the proportion of academic research with women listed as authors in the 2019 CWTS Leiden Ranking.

LSHTM also retained its position as first in Europe and eighth in the world for research impact in sciences, for the proportion of its total publications ranking in the top 10% of most cited research.

‘Gender differences in publication’ is the first time institutions have been ranked based on gender diversity. Between 2014 and 2017, more than 46% of LSHTM research listed female authors, compared with only 30% of all academic research published by British universities. The nationwide figure is an increase from an average of just under 26%, between 2006 and 2009.

In another new addition to the ranking, LSHTM came first in Europe and third in the world for publishing open access research. In total, over 80% of research published by LSHTM is open access.

Professor Peter Piot, Director of LSHTM, said: “The latest Leiden Ranking confirms our School’s position as one the world’s leading centres for research. It demonstrates our aims to make our research accessible to as many people as possible, to enable our work to influence policy and have real-world impact around the globe.

“The new rankings for gender diversity and open access provide important benchmarks against which we will work to continue to improve our performance. We are committed to further strengthening equality, diversity and inclusion at LSHTM - principles which provide the platform for our world-leading research and teaching.”

The 2019 CWTS Leiden Ranking, published by the Centre for Science and Technology Studies at Leiden University, measures the scientific performance of more than 900 major universities from 55 different countries worldwide. It uses Web of Science data to rank universities based on the number and proportion of their publications that are highly cited.

LSHTM performs strongly in various global university league tables. In the 2018 Shanghai World Ranking the institution placed 151-200 overall, and ranked third in public health, 40th in clinical medicine, and 76th in human biology. In the US News Best Global Universities Ranking 2019, LSHTM ranked ninth in the UK overall and 13th in the world in the fields of social sciences and public health. It ranked 27th for medicine in the 2019 QS World University Rankings.