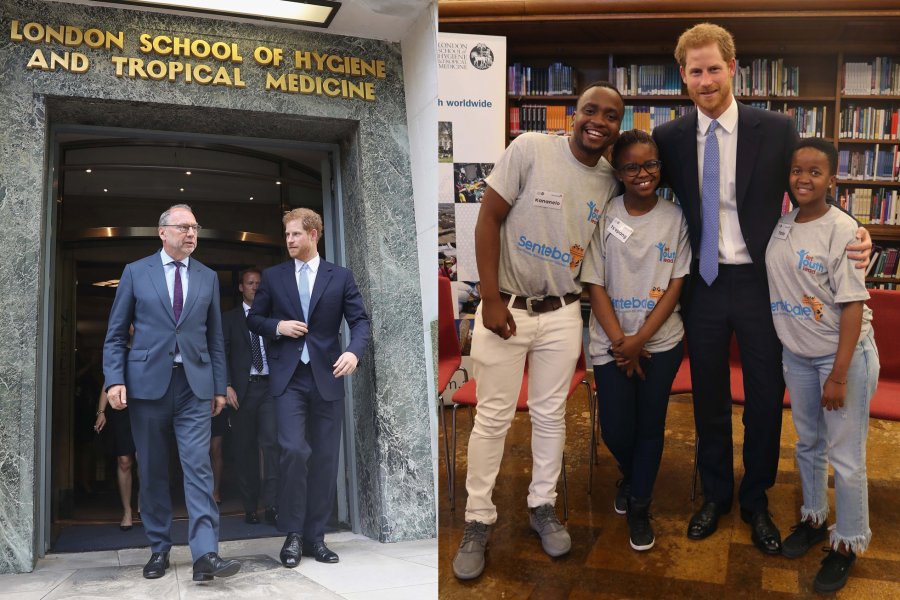 Global HIV leaders have committed to ensuring young people affected by HIV/AIDS play an integral part in shaping new research and policies to strengthen HIV prevention, testing and treatment in sub-Saharan Africa. The agreement was made during a special roundtable organised by the London School of Hygiene & Tropical Medicine, the charity Sentebale and its Co-Founding Patron Prince Harry.

His Royal Highness joined School Director Professor Peter Piot and Sentebale Chief Executive Officer Catherine Ferrier, along with other key global health figures to hear first-hand why youth in the region are failing to test for HIV and access the relevant follow-up care and treatment.

Sentebale ‘youth advocates’ from Lesotho and Botswana described the challenges of living with HIV, and the barriers that prevent young people in Southern Africa from knowing and managing their HIV status, including stigma, poor education and services that rarely engage with the reality of being a young person living with or at risk of HIV.

While great progress has been made in tackling the HIV epidemic in recent years, evidence shows adolescents have been left behind. UNICEF reported in 2015 that the number of adolescent deaths from AIDS had tripled in 15 years. UNAIDS estimates highlight that in 2016, there were 150 deaths every day amongst adolescents due to AIDS-related illnesses, and HIV remains one of the leading causes of death for adolescents in Africa. The situation is particularly urgent for adolescent girls and young women in sub-Saharan Africa. In 2015, nearly 7,500 young women aged 15–24 years acquired HIV each week.

Sentebale’s Co-Founding Patron Prince Harry said: “To me it is totally absurd that in today's world that for young people, the first time they hear anything about HIV/AIDS, it’s probably by the time it is too late.

“HIV needs to be treated exactly the same as any other disease, and between us hopefully we can eradicate the stigma and give these young people an opportunity to stand up and say, I’ve lived it […] and I want to come forward and make a difference.”

At the roundtable event, key representatives from organisations including UNAIDS, the Global Fund to Fight AIDS, TB and Malaria, PEPFAR, and the International AIDS Society outlined commitments as to how they, as the leading figures in the AIDS response, could help address the needs of youth across the sub-Saharan African region.

These commitments included raising the voice of youth in southern Africa at next year’s International AIDS Conference in Amsterdam, providing a stronger platform for evidence-based decision-making around HIV prevention, testing and treatment among adolescents, and enhanced support for lobbying Ministries of Health to tackle policy issues. The youth advocates’ insights help pave the way for new research avenues, and London School of Hygiene & Tropical Medicine experts outlined how they will work to ensure the best scientific evidence is available to help shape interventions and improve the quality of life of young people living with HIV.

"To me it is totally absurd that in today's world that for young people, the first time they hear anything about HIV/AIDS, it’s probably by the time it is too late" - Prince Harry

Marijke Wijnroks of The Global Fund said: “We need to incorporate young people into programmes and research, not just make them the focus of it.”

Presenting at the roundtable were youth advocates including Tlotlo Moilwa, a young woman from Botswana, and Kananelo Khalla, a young man from Lesotho, both of whom are living with HIV. Kananelo said “I want to give a sense of hope that there is still life if you are HIV-positive […] I have a vision of keeping the next generation alive.”

Tlotlo calls herself ‘OctoberBabie’ because she was born in October; she lost both her parents during the month of October; she was diagnosed with HIV in October and began treatment the same month. In March 2016, she came out publicly about her HIV status with the main aim of supporting and motivating other adolescents living in despair because of HIV. Kananelo is active in youth and paediatric HIV/TB care and treatment in Lesotho and has previously received help through Sentebale’s psychosocial support programme and through school bursaries.

"The largest ever generation of adolescents in sub-Saharan Africa are at risk of HIV and yet the world is not listening to them." - Peter Piot

Guests at the event included Dr Luiz Loures, Deputy Executive Director of UNAIDS, Ambassador Deborah Birx, US Global AIDS Coordinator for PEPFAR, Marijke Wijnroks from the Global Fund, and Midori Miyazaki from the Handa Foundation among others. The key themes that emerged were around the importance of reducing the stigma of attending health facilities to encourage people to test for HIV, better education on sexual reproductive health, and rights and psychosocial support to those who are HIV-positive to help them lead healthy, productive lives.

The School is committed to working with partners like Sentebale to provide high-quality research to help inform HIV programmes targeted towards young people in sub-Saharan Africa. School researchers will bring together the latest and most rigorous scientific evidence on barriers to young people in sub-Saharan Africa knowing and managing their HIV status, along with best-practice approaches to address these challenges. They will also develop a brief that consolidates evidence and builds on research on the drivers of HIV for young people, including alcohol, intimate partner violence, transactional sex, stigma and social norms.

Professor Peter Piot, Director of the London School of Hygiene & Tropical Medicine, who was formerly founding Executive Director of UNAIDS, said: “The largest ever generation of adolescents in sub-Saharan Africa are at risk of HIV and yet the world is not listening to them. Young people should be involved every step of the way, from research development to policymaking.

“It was a privilege to welcome Prince Harry and other global HIV/AIDS influencers, and especially the youth advocates. Hearing their experiences should be a wake-up call for researchers and policymakers as HIV/AIDS is not over, especially in sub-Saharan Africa.

“Working with Sentebale we will develop a roadmap for best practice in tackling issues faced by young people affected by HIV, and the School will continue to be at the forefront of HIV/AIDS research. We need to listen to young people and understand what they are going through. Their experiences remind us that we must work together as a global health community, allowing all young people – whatever their HIV status – to lead healthy, happy and productive lives.”

Ahead of the roundtable session, Prince Harry was given a tour of the School where he learnt of its vital work in combating some of the world's most pressing health issues. His Royal Highness heard about Peek, an organisation which aims to increase access to eye care by using apps and other technology to find people living with avoidable blindness, and was given an overview of the School’s response to the recent Ebola epidemic in West Africa. The Prince met researchers working on various HIV interventions including de-stigmatisation as part of the PopART project, saw a demonstration of an HIV self-testing kit currently being used in a trial in Malawi as part of the STAR project, and learnt of the links between domestic violence and women and girls’ risk of HIV.

The roundtable  forms part of Sentebale’s newly developed initiative called Let Youth Lead, which Co-Founding Patron, Prince Seeiso launched in Lesotho in April. The programme provides a platform for youth to advocate to their peers to test for HIV and manage their status whether it is negative or positive, and to drive positive change in HIV interventions that better support the needs of this age group in the region.

Sentebale’s ambition for 2020 is to be operating in five countries in sub-Saharan Africa. This began in 2016 with expansion into Botswana, and will continue forward with Sentebale expanding its programme of psychosocial support to reach more 10 to 19 year olds living with HIV in Malawi, helping ensure they adhere to their medication and can lead healthy, happy lives.