Human populations have flourished on earth, especially over the last 200 years.  The global population has increased to over seven billion, average life expectancy at birth has risen to more than 70 years and most recently extreme poverty has seen sustained reductions.  But this expansion has come at a cost, and it’s the health of the planet that has paid the price.  In our continued search for progress and economic development we have (literally) mined the earth resources. Now we’re slowly waking up to the fact this is just not sustainable.

The situation is depressing and worrying in equal parts.  But is there anything that can be done to reverse these trends and protect public health in the face of projected environmental changes?

The new London School of Hygiene & Tropical Medicine (LSHTM) Centre on Climate Change and Planetary Health aims to take a major step in identifying solutions to the impact of environmental change on human health.

Building on more than 25 years of LSHTM environment-health research, the Centre will advance research across several major themes that include understanding the direct and indirect effects of environmental change on public health, identifying the potential co-benefits to public health of carefully-designed climate-mitigation actions, and developing innovative solutions to enable populations to adapt healthily to future environmental change.  Initial work will focus on LSHTM research strengths in healthy and sustainable cities of the future, halting the spread of infectious diseases, and food systems that provide healthy and sustainable diets for all. 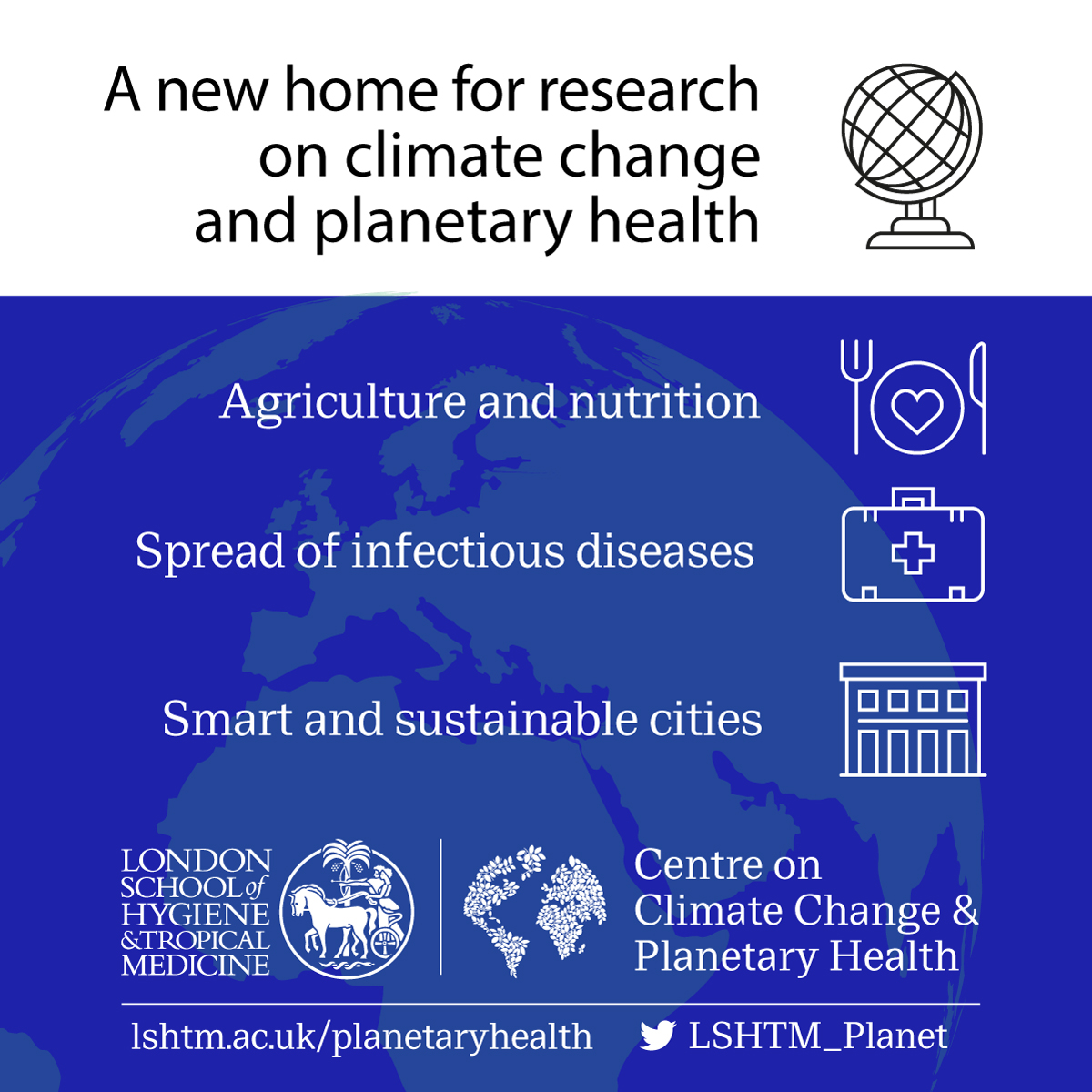 However, research is one thing.  Action is another and changing people’s lives for the better requires evidence of effective solutions to be put into practice as quickly as possible. To achieve this transformational change, the Centre will seek to ensure that the necessary research is being conducted in a timely manner by working closely with decision-makers around the world.

The impacts of climate and environmental change are, and will continue to be, felt the hardest by the poorest and most vulnerable in society – many of whom currently live in low and middle-income countries.  The Centre will continue to expand its partnerships with scientists in the global South to strengthen local capacity and support a cohort of researchers throughout the world with the necessary skills to conduct research on planetary health.

To-date far too much of the debate on climate change and health has been held within academia’s shiny ivory towers.  Recent climate protests, not least those led by school children around the world, have demonstrated that there is an enormous thirst for knowledge and most importantly action.  The Centre will champion activities with the public on planetary health, hosting debates and workshops to widen understanding of current evidence and identify potential, implementable solutions.

I’m proud to be leading LSHTM’s 14th Centre.  With its clear and unique focus on planetary health, it will extend LSHTM’s global leadership in public health.  The Centre will bring together researchers from a wide range of disciplines and backgrounds across LSHTM.  However, we cannot do this on our own.  Strong partnerships and open collaboration with a wide and expanding network of researchers around the world will be critical to our success.

At the student protest in London on 24th May 2019 a poster being held up by a young woman read “Declared an emergency?  Then act like it”.  It’s clear that many people are grappling with the challenge that there may actually not be an infinite future.

It’s time for academia to rise to this challenge. We must drive the transformation that is needed to tackle the greatest threat of our generation to our health and the health of our planet. We must future-proof our world.

The Centre on Climate Change and Planetary Health
Implementation of the Paris Agreement critical to avoid large increase in temperature-related deaths
Heatwave deaths likely to rise steadily by 2080 without appropriate climate and health policies
Air pollution is an important and neglected cause of death in children in low-income countries
Predicted environmental changes could significantly reduce the global production of vegetables
Globally, the cost of the Paris Climate Agreement could be outweighed by health savings from reduced air pollution – expert comment
Study of impact of climate change on temperatures suggests more deaths unless action taken
Pollution a major cause of premature death globally which does not receive the attention it deserves – expert comment