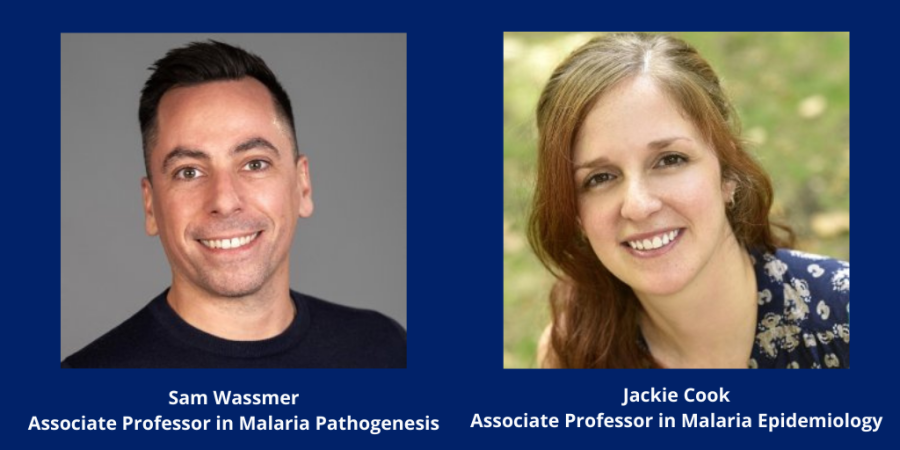 2022 marks a change in leadership for the Centre with two new Directors, Jackie Cook and Sam Wassmer, taking over from Sian Clarke and Colin Sutherland, who have led the Centre for 3.5 years, beginning their tenure before the world had heard of COVID and supporting the Centre through the pandemic. A huge thank you to you both! Let's find out about the new leadership team:

What is your research background?

SW: I did my PhD in Marseille (the ratio of bench-to-beach time was sadly not in my favour), where I investigated on the role of platelets in the development of cerebral malaria. I’ve continued to work on this fascinating neurological syndrome since, first in paediatric patients in Malawi, where I was based for over 5 years as a Wellcome Trust Research Fellow, then in adult Indian patients after I joined the faculty of New York University School of Medicine.  I heard London calling in 2016 (or was it Colin Sutherland?) and moved to LSHTM before joining its Malaria Centre shortly after.

JC: I studied Biology and started my malaria career as a lab scientist, but I would now class myself as an epidemiologist/statistician so it’s been quite a journey! My PhD involved investigating the use of serological responses to malaria parasites to evaluate malaria transmission dynamics (it also involved 1000s & 1000s of ELISAs!). This led to a transition to working on malaria surveillance, and I was lucky enough to be based in Zanzibar for much of this work, working closely with the national control programme. Since returning to LSHTM in 2015, my work has primarily focussed on designing and analysing vector control trials. I feel lucky to have worked in several research specialisms and the things I’ve learned along the way are beneficial in my everyday work, plus it means I’ve got lots of wonderful colleagues to catch up with at conferences!

Tell us a little bit about the research you are currently undertaking?

SW: My team and I are currently using advanced neuroimaging techniques to better understand factors influencing the development and outcome of cerebral malaria. We are combining these approaches with cutting edge clinical, laboratory, omics and in silico investigations to determine the pathogenetic mechanisms leading to cerebral malaria, to both develop new diagnostic and prognostic tools, and inform much-needed adjunct therapies.

JC: My current work focusses on vector control trials. We recently finished an exciting trial of a novel house modification tool (Eave Tubes) in Cote d’Ivoire, and I’m currently involved with a large bed net trial in Benin, which is likely to result in WHO policy changes for bed nets. My role is quite varied, and I get to work with entomologists, economists, social scientists, policy makers and implementors. Sometimes, I even venture back into the lab!

Do you think malaria eradication is possible in your lifetime?

SW: There’s been some very promising progress recently, which could unfortunately be compromised by funding cuts and potential long-term effects of the ongoing pandemic. However, I remain optimistic, especially when I see the drive and motivation of the new generation of malaria scientists!

JC: It’s a big challenge but I think we’re on the right path and there’s some exciting developments on the horizon, including the roll out of the vaccine, new vector control tools and genetically modified mosquitoes.

What are your hopes for the Malaria Centre under your leadership?

JC & SW: We've both been members of the Centre for many years, and it has played an important part in our respective careers. Together, we're keen to ensure that the next generation of malaria researchers get the same opportunities that we did. One of our key goals is also to maximise diversity within our membership, putting global health decolonisation at the forefront of our agenda. Lastly, we will increase the Centre’s engagement with broader internal and external audiences and prioritise a green agenda. It’s a lot to take on (and big shoes to fill) but we're really looking forward to the achievements and challenges ahead.