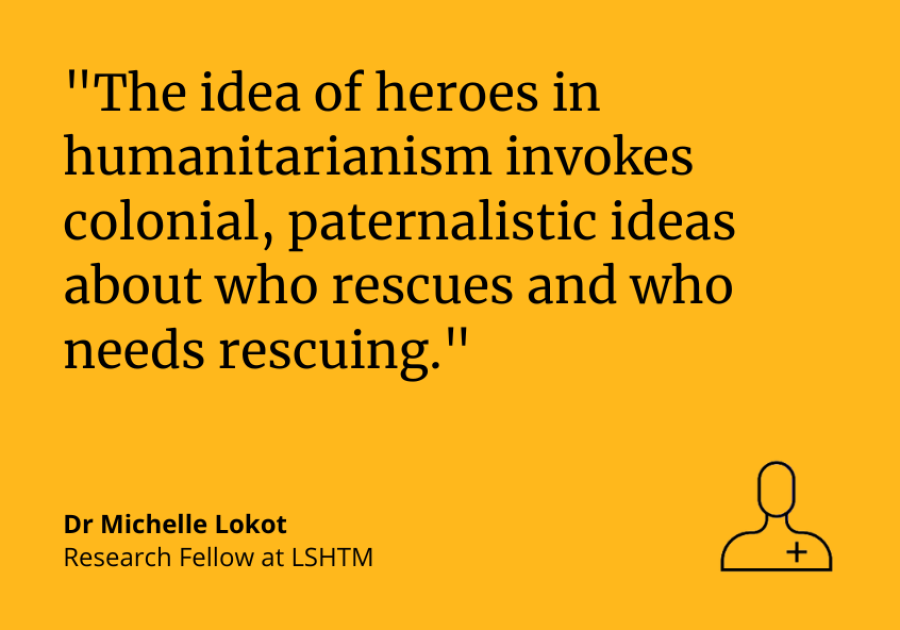 World Humanitarian Day (WHD) takes place annually on 19 August to remember humanitarian workers who have lost their lives. It was inaugurated to mark the 2003 bombing of the Canal Hotel in Baghdad in which 22 people were killed, including Sergio Vieira de Mello, the then-UN High Commissioner for Human Rights.

Although the UN has recently updated its 2022 theme to "It takes a village", previous themes and organisations’ campaigns have focused on the idea of “heroes”, pointing to a notion of saviourism which is an issue still very much present in our field.

While the intent of WHD is to emphasise the importance of safety, independence and protection for humanitarian workers, we believe that themes based around heroism invoke colonial and paternalistic ideas about those who need rescuing and those who rescue, a phenomenon known as ‘savourism’.

Saviourism in humanitarian aid (which is often but not exclusively racialised, see white saviours) is underpinned by the perception of ‘rescuing' a marginalised group through a sense of moral obligation. Such practice often happens without the input of those who are marginalised and without acknowledgement of the oppressive structures responsible for such marginalisation.

In 2020, the WHD website highlighted the theme of “Real Life Heroes” stating: “What do you call a person who runs towards danger to save others? Who is undaunted by disease, famine, drought, floods, earthquakes, tsunamis, locusts, conflict zones - and now the COVID-19 pandemic? Would you call that person a hero? We would, too.”

UNHCR also highlighted the challenges of COVID-19 for those fleeing conflict, pointing to humanitarian workers as heroes. A previous World Vision tagline was “Hidden heroes bring hope to the most vulnerable”, and the World Food Programme (WFP) has stated: “Not all superheroes wear a mask and a cloak. Many simply don a World Food Programme (WFP) vest and set out each day to reach those people most in need of our support.”

In 2021, the EU website started off well in shifting the focus slightly: “No medals, no records, no podiums…”, but the tagline continued “Just saving lives”, again invoking the idea of rescue and saving. This is not unusual messaging for humanitarian actors: it still continues. Videos such as We the Helpers have garnered criticism for perpetuating saviourism.

The notion of a ‘hero’ clashes with recent efforts in humanitarian aid towards decolonising. Since the World Humanitarian Summit in 2016 – where humanitarian actors made explicit commitments related to shifting power and localising aid – humanitarian actors such as UN agencies, international NGOs and government actors have been increasingly reflecting on power dynamics within aid. They have sought to equalise power between the humanitarian actors in the ‘North’ who often wield power and budgets as part of historical legacies, and the ‘South’ whose role has often been limited to implementing activities.

We do not believe that humanitarianism is a bad thing, but it does have potential to cause harm when done in ways that perpetuate unequal power dynamics, or that give certain groups voice and decision-making over others. We do also recognise that many humanitarian actors are facing financial restrictions and budget cuts as a result of the pandemic, increasing the need to maintain interest from donors and the public, which can influence organisational messages like this.

While some humanitarian organisations use WHD to highlight the important work of local humanitarian actors by using accounts of their humanitarian work, it is more crucial to emphasise the escalating risks local actors are facing. According to the Humanitarian Outcomes 2022 report, 140 humanitarian workers were killed in 2021, the highest number since 2003. Local staff make up the majority of these numbers. In our experience working in and conducting research in humanitarian settings, the safety of national staff is often not prioritised compared to expats who visit or live in field locations, demonstrating another colonial hangover in humanitarianism.

However, decolonising aid goes beyond merely emphasising how local actors are delivering aid, but means questioning the rationale and processes behind efforts to modernise and provide aid. There are no quick-fixes. Ongoing institutional commitments and reflection are necessary.

At LSHTM, we are increasingly reflecting on how our colonial history continues to shape how we engage with those labelled the ‘Global South’, as well as how we engage with each other at the School. A new report of LSHTM and its colonial past up to 1960 was published last week, reflecting the School’s historic relationship with the British Empire. This report highlights how LSHTM was established and sustained as part of the colonial enterprise and how LSHTM’s research was not merely scientific, but part of Britain’s colonial endeavours. Understanding this history is part of LSHTM’s ongoing work to decolonise the curriculum, support equitable partnerships and build research capacity.

The report also sits alongside a recent independent review at LSHTM on discrimination and racism which linked instances of racism to ‘structural issues’ including our colonial history. The broader LSHTM Decolonising Global Health Group and the Fight Against Institutional Racism (FAIR) Network also continue to push for equity and justice in our approach to decolonising at LSHTM. This is a necessary reminder of the way health research can negatively impact communities if implemented through a ‘top-down’ approach.

At the Health in Humanitarian Crises Centre (HHCC), we are exploring how to decolonise our research, teaching and other practices, including research and donor partnerships, through a new research collaboration with the FAIR Network. FAIR is pushing for anti-racist praxis, racial equity, historical accountability and radical transformation at LSHTM.

This qualitative research project starts in September 2022, and aims to assess the barriers and facilitators around decolonising HHCC’s teaching, research and partnerships. The project will provide practical guidance on how we can ensure these activities and practices can be decolonised and move away from saviourism.

We aim to achieve our project’s aim by:

We recognise there are already some good practices among HHCC members and want to continue to learn from these initiatives. For instance, in a new CDC-funded project, we are taking a decolonial and co-production approach to conducting research on public health issues in humanitarian crises in DRC, Somalia, South Sudan and Sudan, and are working collaboratively with national researchers to challenge power hierarchies embedded within every stage of the research process. For example, we recently held a workshop to collectively decide our planned ways of working based on key decolonial principles and values. We established a flatter decision-making structure to allow country teams to have more of a voice in project decisions. And in our Conflict & Health course, we are thinking more carefully about who delivers lectures to ensure the voices and expertise of those closest to the humanitarian issue are reflected.

There has been some positive momentum toward decolonising within HHCC and LSHTM. However, there is still much to do to challenge the prevailing, colonial messages. The humanitarian sector has also made some progress towards decolonising, but themes evoking the notion of heroism for World Humanitarian Day could be seen as a step back to saviourist messaging and valourising the notion of helping. We should rather be recognising local and national humanitarian workers across the globe who have lost their lives due to insecurity, and taking steps to ensure they can work safely.