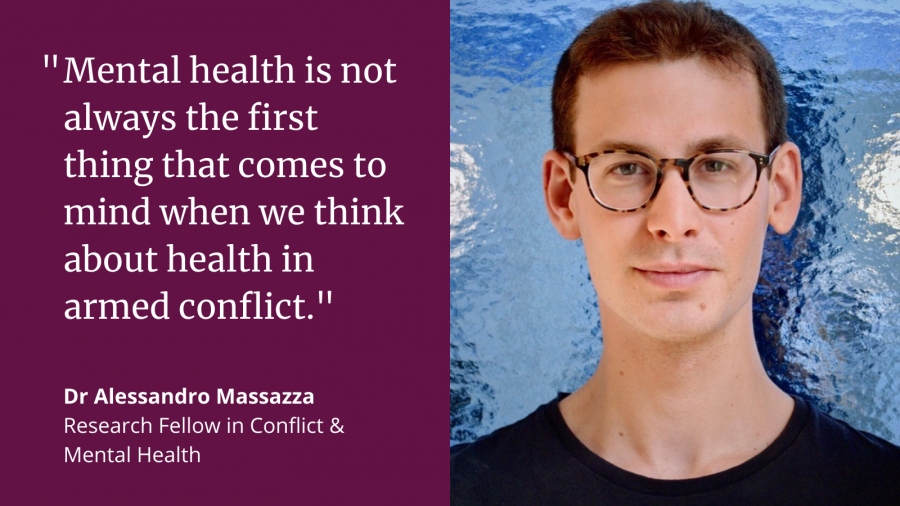 I was born in Genova and raised in Milan, in the North of Italy. I am half Scottish and half Italian.

What inspired you to pursue a career in conflict and mental health?

Mental health is not always the first thing that comes to mind when we think about health in armed conflict. However, conflicts can have long lasting consequences on the mental health of exposed individuals, families, and communities. Advocating for the importance of researching and protecting mental health in contexts affected by armed conflict and other adversities is an important motivator for working in this space.

Your doctorate was on intrusive memories among earthquake survivors. What were your main findings?

My PhD in clinical psychology focused on figuring out why intrusive memories tend to be fragments or snapshots of a traumatic event rather than capturing the entire event. One possible explanation has to do with how memory is encoded in highly stressful situations. More specifically, various emotional and cognitive reactions taking place during traumatic events such as dissociation or freezing (called peritraumatic reactions) could disrupt normal memory encoding. Indeed, we found that the moments of a trauma experienced as intrusive memories were characterised by higher levels of peritraumatic reactions than moments from the same trauma that were not experienced as intrusive memories.

You worked on the mental health strand of the R4HC-MENA project. What were your duties there?

You also worked for the Department of Mental Health and Substance Use at the World Health Organisation on developing a Minimum Services Package for Mental Health and Psychosocial Support (MHPSS). Could you explain what will this package include?

The Minimum Services Package (MSP) for MHPSS is currently being developed by WHO, UNICEF, and UNHCR and will describe a set of priority actions to be carried out by humanitarian actors responding to initial MHPSS needs in both new emergencies and ongoing protracted conflict settings.

You are currently working in the CHANGE project. Could you expand on what does your role involve?

I am currently working as a research fellow on the CHANGE project. CHANGE aims to address alcohol misuse and mental health comorbidities among conflict-affected populations in Ukraine and Uganda through the development and implementation of a brief transdiagnostic psychological intervention. We are currently working on developing the intervention and planning its pilot testing.

The relationships I have built with my colleagues in different countries and institutions have definitely been some of the achievements I am the proudest of.

What would you say are the most relevant challenges in mental health support among populations affected by adversity?

We are now at the stage where we have several effective and evidence-based mental health and psychosocial interventions for populations affected by adversity. I think that one (among many others!) possible challenge for the future will be exploring how we can implement these interventions in a sustainable manner and scale them up to reach more people in need.

What lessons have you learned from your career journey so far?

Not to be afraid to reach out and connect to people with similar interests.

What do you do in your spare time?

Hike in the mountains with my dog, read about plants and animals, and study Russian

Where do you see yourself professionally in the future?

I am becoming increasingly interested in the intersection between climate change and mental health. We know climate change will lead to more intense and frequent extreme weather events and there is some preliminary evidence on the link between the changing climate and armed conflict. In a future dream job, I would be investigating how we could use mental health and psychosocial interventions developed for settings affected by adversity in the context of climate change.

What advice would you give to a student or young professional who wants to start or is starting a career in your field?

Be curious, be kind, pick supportive mentors, and reach out to colleagues with shared interests