“Without a doubt, this is the way forward”: New study shows that women who accessed abortion during the pandemic overwhelmingly support at-home abortion 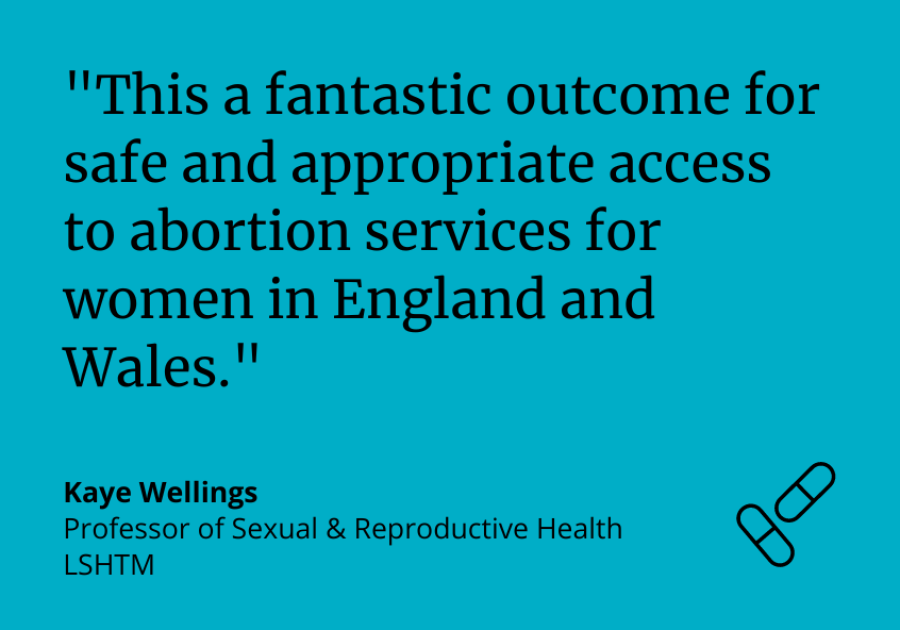 Women who had an abortion in Britain during the pandemic support the continuation of permissions for home-use of both abortion pills and a telemedical model of care - otherwise known as “Pills by Post”, according to new research published in BMJ Sexual and Reproductive Health.

The governments of Wales and England have made these permissions permanent, with the Scottish government yet to announce their decision.

This new research forms part of the SACHA Study, the largest research project on abortion to be carried out to date in the UK, funded by the NIHR and led by researchers from the London School of Hygiene & Tropical Medicine (LSHTM) in collaboration with a consortium of researchers from a range of institutions including the Centre for Reproductive Research & Communication at BPAS. The project’s aim is to gather information that will have a direct impact on clinical policy and practice and will help shape abortion care for the future.

Researchers interviewed 30 women who accessed abortion in Scotland, Wales, and England between July and December 2021, while COVID-specific permissions for abortion were in place allowing use of both pills for medical abortion at home. This heralded the introduction of a fully telemedical model of abortion care with consultations taking place via phone or video call and medications delivered to women’s homes.

In the interviews, researchers specifically enquired whether women thought the permissions for abortion-at-home should be made permanent based on their own experiences. Participants were overwhelmingly in support of continuation of telemedical abortion provision and felt fortunate to have accessed at-home abortion. Women responded: “Without a doubt, this is the way forward” and “I really strongly feel it shouldn’t change”.

The women who were interviewed supported telemedical abortion because it is convenient and allowed them to plan their treatment around work and childcare. One participant commented: “It meant that I didn’t have to take any days off work. I didn’t have to tell work anything, and that suited me... it worked really well, and I was able to fit it into my life.” Participants who had had an abortion before felt that telemedicine was more efficient and saved them travel time and costs compared to their previous experience. Many women acknowledged the particular benefit of at home abortion for those who are less advantaged.

Kaye Wellings, Professor of Sexual and Reproductive Health at LSHTM, SACHA Study Principal Investigator and lead author of the study, said: “This study shows that women are in favour of having the option of home management of medical abortion, adding to mounting evidence from other studies of its safety and effectiveness.

“It also aligns with current shifts in health care more broadly, towards greater patient autonomy and increased use of digital support. This has been further proven by the positive response from MPs to extend the ‘pills by post’ approach indefinitely, which is a fantastic outcome for safe and appropriate access to abortion services for women in England and Wales.”

Home-use of abortion medications was preferred by participants because it offered comfort and the privacy of being in their own space. Women also reflected that home management reduced stigma with one participant expressing: “there’s that fear of being judged, of feeling ashamed.  To not have to actually see anyone face to face, was really great actually.”

Women felt that Pills by Post resulted in increased autonomy and greater control over their body and decision. Another important theme that emerged in the interviews was the importance of choice for model of care. Overall, participants felt that Pills by Post should continue, but women should also have the option to access in-clinic care. One woman stated: “I personally think that having options is great. So if someone wants to do it at home, then they should be allowed to. If they want do it in the clinic, they should be allowed to do that as well. Because everyone, everyone's different. I think giving people the choice is probably the […] ideal situation.”

Highlighting the voices of women who have experienced an abortion during the pandemic, these findings make a powerful case that this model of care is acceptable, often preferred by women, and should be made permanent by all UK governments.

First author, Dr Patricia Lohr, Medical Director of BPAS and Director of the Centre for Reproductive Research & Communication said: “Evidence in support of using both abortion pills at home and for telemedicine predates the permissions granted in Britain in March 2020. Nevertheless, clinicians and researchers from the UK and beyond have rallied to grow that evidence base further using the enormous amount of data accumulated as service providers. This study amplifies the voices of women who experienced abortion during the pandemic and who overwhelmingly endorse this model of care. We’re delighted to be able to continue this service for women in England and Wales."