Creating an evidence base to guide new directions in abortion care in the UK.

The SACHA Study is the largest research project on abortion to be carried out to date in the UK. More than 20 researchers from seven countries have come together forming the SACHA Consortium.

Find out more about the research
Background

Changes are taking place in the abortion landscape that will impact patients, practitioners and policymakers. Around three in four abortions carried out in the UK are now done by taking pills, and only one in four by surgery. Early medical abortion, involving taking mifepristone and misoprostol, can now be managed as part of routine healthcare in the first 10 weeks of pregnancy.

Learn more about the background into this study

The SACHA Consortium is a large group of practitioners, policymakers and researchers, united by the common aim of ensuring that new directions in abortion care are soundly based on robust empirical evidence. Their expertise encompasses healthcare, including nursing and midwifery, sexual and reproductive health, general practice, commissioning, public health and policy, social science, epidemiology, information technology and the law.

Institutions collaborating on the SACHA Study, led by Prof Kaye Wellings and Dr Rebecca French at the London School of Hygiene and Tropical Medicine, include the British Pregnancy Advisory Service, the Karolinska Institute (Sweden), King's College London, Lambeth Local Authority, University of British Columbia (Canada), University of Edinburgh, University of Kent, University of Melbourne (Australia), University of Oxford and University of Plymouth. Between them, the team members have provided the evidence base for most of the large national sexual and reproductive health interventions in the UK in the last three decades.

Changes are taking place in the abortion landscape that will impact patients, practitioners and policymakers. Around three in four abortions carried out in the UK are now done by taking pills, and only one in four by surgery. Early medical abortion, involving taking mifepristone and misoprostol, can now be managed as part of routine healthcare in the first 10 weeks of pregnancy. Since 2018, women have been able to take the second abortion pill, misoprostol, at home, and manage the abortion themselves. During nationwide lockdowns, abortion services have mainly been delivered through telemedicine and self-managed by patients, who have been able to administer both pills themselves.

Moves are afoot to change the law on abortion provision. The 1967 Abortion Act in Britain legalised, but did not decriminalise, abortion. It is still a criminal offence to have an abortion unless two doctors have signed to confirm certain conditions have been met. Many are now calling for the law to be changed, arguing that, since the procedure is safer than continuing the pregnancy, it should be governed by healthcare regulations and not the law. Both the UN and the WHO have called for abortion law reform. In Northern Ireland, the law was changed in 2019, so that women and healthcare workers no longer face prosecution if they end a pregnancy without medical approval. The same may well happen in the rest of the UK.

At the same time, the drive for abortion provision to be brought in line with modern healthcare practice is gathering pace. Clinical pathways and models of abortion care being considered reflect the need for patient-centred approaches, shared decision-making and supported self-management - all of which are supported by increasing use of telemedicine and digital resources. Thought is being given to what support is needed by women self-managing abortion and what role can health professionals such as GPs, pharmacists, nurses and midwives play in provision.

The changes could have real benefits. Patients would have more control over what happens to them. Research from other countries has shown that effective, safe and acceptable abortion care can be provided by non-abortion specialist healthcare workers. But reliable evidence is needed to underpin the reforms in the UK. Efforts are being made to develop new ways to improve abortion care in other parts of the world, but more needs to be known before deciding what is the right fit for the UK. The SACHA Study has been funded by the UK's National Institute of Health Research to gather information that will have a direct impact on clinical policy and practice, and will help shape abortion care for the future.

Who we are
SACHA profiles
Core team

Dr Melissa Palmer, Assistant Professor at LSHTM. Brings experience of both quantitative and qualitative research, including evaluation of E-Health interventions, analysis of routine data and large-scale survey data. Will contribute across the study to fieldwork, data analysis and reporting. Co-leading Work Package 2.

Dr Rachel Scott Assistant Professor at LSHTM. Brings qualitative and quantitative expertise and experience, including comparative research on abortion (Britain vs France; US vs Britain); representations of abortion (West Africa) and an intervention trial of the effect of post-abortion contraceptive counselling. Will contribute across the study to fieldwork, data analysis and reporting. Co-leading Work Package 2.

Maria Lewandowska is a Research Assistant in the Department of Public Health, Environments and Society at LSHTM. She completed her MSc in Reproductive and Sexual Health Research at the School and wrote her thesis looking at the impact of the approval of home administration of misoprostol in medical abortions in England, using quantitative methods. Involved in the quantitative and qualitative components of the study.

Natasha Salaria is a Research Assistant in the Department of Public Health, Environments and Society at LSHTM. She completed her MSc in Reproductive Science and Women’s Health at UCL and brings quantitative and qualitative experience along with strategic communications and dissemination of research. Will be involved in the quantitative and qualitative components of the study including fieldwork, data analysis and reporting on Work Packages 3 and 4. Natasha is also a mental health first aider at the School.

Prof Louise Keogh Professor, Health Sociology, Melbourne School of Population and Global Health. University of Melbourne. Experienced qualitative researcher who has studied the impact of decriminalisation of abortion in Victoria and has recently received funding to explore a new model for the regulation of conscientious objection to abortion in Australia. Louise will be actively involved in facilitating fieldwork in Australia, in the recruitment of participants, the identification of published and grey literature on abortion in Australia and in carrying out fieldwork.

Clare Murphy Chief Executive Officer at British Pregnancy Advisory Service. In addition to contributing to Work Package 4, Clare will work with the LSHTM lead on dissemination of study findings and public engagement and will manage lay involvement in the study.

Jennifer Reiter is Lead Commissioner for Sexual Health (including abortion services) at London Borough of Lambeth. She has also commissioned sexual and reproductive health services for London Borough of Camden and HIV Prevention England. In the UK she previously served as Secretary for Abortion Support Network. In the US she delivered education, outreach and training for Planned Parenthood chapters in Wisconsin and Illinois. For the SACHA study, she will provide guidance into the commissioning of services and will facilitate the participation of commissioners in the study and enlist their support in disseminating the outputs. Co-leading Work Package 5.

Dr Geoff Wong Associate Professor in Primary Care at the Nuffield Department of Primary Care Health Sciences, University of Oxford and GP in London. Brings extensive expertise in realist synthesis and its application to understand implementation to complex health and social interventions.

The SACHA Study is the largest research project on abortion to be carried out to date in the UK. More than 20 researchers from seven countries have come together forming the SACHA Consortium with the aim of building a comprehensive evidence base for new directions in abortion care. Five interlinked work packages make up the study:

The study findings will be tailored to different audiences - the general public, the media, healthcare professionals, academics, policymakers and commissioners.

If you are aged 16 or older and have recently undergone a medical or surgical abortion for reasons other than fetal anomaly, we would love to hear from you. Please register your interest by filling out our online form and we will get in touch to arrange a suitable time.

Please see below for the Patient Information Sheet and Study Consent Form. 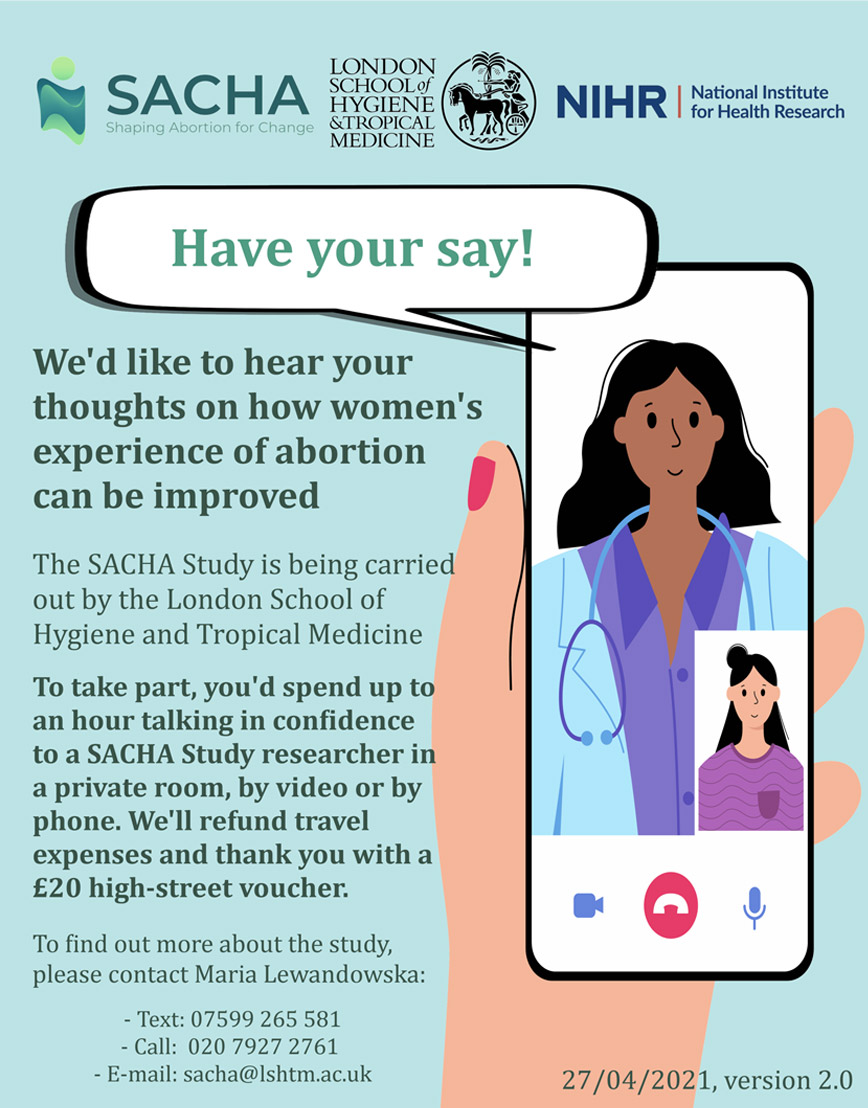 Items in the media citing SACHA:

Our team presented the following research at the conference of the International Federation of Abortion and Contraception Professionals in September 2022:

Read more about our research at the conference.

The results of the first research paper published by SACHA, based on qualitative interviews with women with recent experience of abortion, presented by Maria Lewandowska at the conference of the European Society of Contraception and Reproductive Health, May 2022.