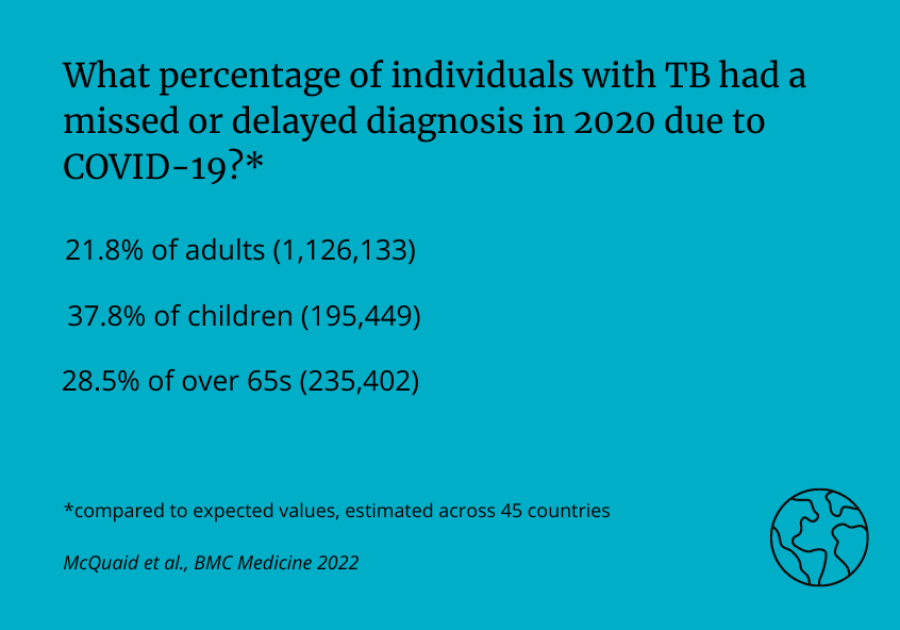 Vulnerable populations in 45 high-burden countries worldwide must be prioritised in efforts to reduce the impact of the COVID-19 pandemic on tuberculosis (TB) care, according to new research published in BMC Medicine.

The call to action follows the results of a new study investigating potential inequalities by age and sex of the impact of disruptions caused by the COVID-19 pandemic on access to diagnoses of this deadly disease.

The team - including researchers from the London School of Hygiene & Tropical Medicine (LSHTM), The Liverpool School of Tropical Medicine and the Malawi-Liverpool-Wellcome Programme - modelled trends in TB case reporting to the World Health Organisation (WHO) for 45 high-burden countries between 2013 and 2019. Predictions for 2020 using these models were then compared to actual observations in the same year.

Although the study found no evidence for systemic disparity in risk by age or sex on a global scale, when broken down by country, setting-specific inequalities were revealed.

For example, in over half of countries (57.1%) analysed, children were at a greater risk of having their TB diagnosis delayed or missed due to COVID-19 than adults, with children in WHO regions in the Eastern Mediterranean (namely Pakistan and Somalia) and Europe (for example Tajikistan and Ukraine) found to be disproportionately affected. Similarly higher risk figures for older individuals compared to adults were also revealed, namely in over two thirds of countries (70.1%), including WHO regions in the Western Pacific (such as China and Mongolia) and Europe (for example, Kazakhstan and Belarus). In almost half of countries (45%), sex was predicted to be an influential risk factor. Men, for example, were found to be particularly susceptible to missed or delayed diagnoses in the WHO region of the Americas (namely Peru and Brazil).

These results suggest that the pandemic may have resulted in high numbers of individuals with TB being left untreated and unknowingly spreading infection, with long-term public health ramifications.

Joint lead author Dr Finn McQuaid, from the TB Centre and Centre for Mathematical Modelling of Infectious Diseases (CMMID) at LSHTM said: "Our results show that in many countries those who already faced the most difficulty in obtaining TB diagnosis and care have suffered worsening access as a result of the pandemic. While we look to build back and mitigate the impact COVID-19 has had on those with TB, it's vital that we focus on those most in need; not just out of a duty to address these inequalities, but to have any hope of ending TB.”

Despite being responsible for the second largest number of deaths from an infectious disease worldwide, detection rates for cases of TB are low with inequalities in burden and access to care, notably for men, older individuals and children.

Until now, investigations into disruptions to TB patient care caused by COVID-19 have focused on the overall impact of the pandemic, with little consideration for the effect of potential inequalities, such as those related to age or sex.

The findings from this study may provide vital guidance as to major areas that should be targeted by policy makers to reduce the impacts of the pandemic on global TB burden, taking us one step closer to ensuring equitable patient care.

Co-author Dr Katherine Horton, also from the TB Centre and CMMID, said: “Population groups whose access to TB diagnosis was disproportionately affected by the COVID-19 pandemic should be prioritised in catch-up campaigns. For example, in settings where children have missed diagnoses, school-based strategies may be useful, while gender-sensitive strategies should be implemented in settings where one sex has been relatively under-diagnosed.”

She went on to highlight that “Programmes must also monitor the continued impact of the pandemic across these groups to ensure equitable access to TB care so that no-one is left behind.”