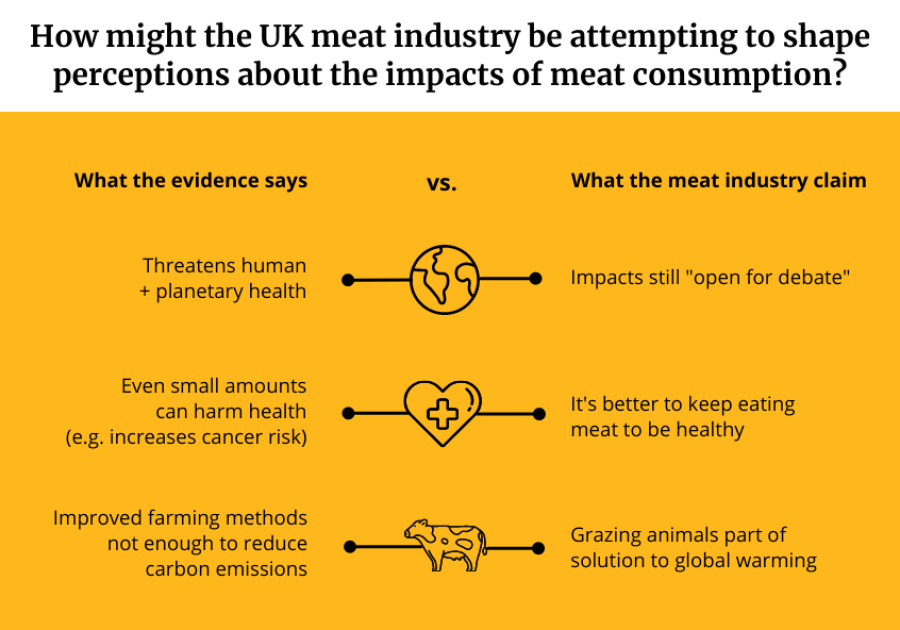 In the face of growing national and international consensus on the need to reduce meat consumption for environmental and population health reasons, the meat industry may be attempting to cast doubt on scientific evidence and downplay harms, claiming instead that people should keep eating meat to be healthy and that most people don’t need to cut down, according to new research published in Food Policy.

Led by the London School of Hygiene & Tropical Medicine (LSHTM), the study is the first peer-reviewed systematic analysis to investigate how key industry players frame discussions about the health and environmental impacts of red and processed meat consumption.

The study analysed documents including reports, guides, educational materials, factsheets and responses to relevant events or research articles produced by six meat industry representative bodies that mentioned meat and health and/or the environment.

The authors concluded that while it is not possible to comment on whether the meat industry is using strategies intentionally to resist reductions in consumption, the framing of issues in a way that portrays their products in a favourable light is in line with methods used by producers of other harmful commodities.

The industry documentation suggested that the harmful health and environmental impacts of red and processed meat are “still open for debate”, claiming that there is a lack of scientific consensus on the issue and questioning the credibility of claims about the harms.

Dr James Milner, senior author from LSHTM, said: “Promoting messages that minimise the potential environmental and health harms of red and processed meat consumption could affect the perceived urgency of this issue on the policy agenda. These findings should act as a call to action for greater scrutiny of the industry, as addressing people’s appetite for meat will be crucial to efforts to avert climate breakdown and improve public health.”

For example, recent evidence suggests that plant-based diets can be a healthy choice (although supplementation of B12 and iron may be required) and that eating red and processed meat, even in small amounts, has the potential to harm health, including increasing risk of colorectal cancer.

Despite this, meat industry documents described eating a certain amount of meat as being safe or stated that most people do not eat too much and therefore don’t need to reduce consumption. Red meat was also described as better than non-red meat alternatives for providing nutrients such as iron, zinc and B12.

Current research suggests that while farming method does impact carbon emissions, improved production practices alone will not achieve great enough cuts and there must also be a reduction in meat consumption to achieve climate goals. However, the team found that the meat industry documents frequently cited the potential environmental benefits of livestock farming, claiming for example that land used for livestock can act as a carbon sink and that grazing animals are part of a solution to global warming.

Dr Kathryn Clare, lead author from LSHTM, said: “There is growing evidence to suggest that current consumption trends of red and processed meat are a threat to both human health and the health of the planet and this is increasingly being recognised in UK policy spheres. The 2021 National Food Strategy for England, for example, recommended that meat consumption should be cut by 30% in the next decade.

“Our findings suggest that the meat industry may be using various frames that counteract this narrative. While we can’t say whether this is having a direct impact on consumer behaviour or policy, it is clear that the meat industry is a powerful voice and the input of organisations representing the sector on issues relating to meat consumption should be of serious concern to those involved in food or sustainability policy.”

The researchers acknowledged the limitations of the study, including the decision not to focus on individual companies and the fact that many of the relevant organisations identified did not have public facing documents. They note that the frames used by industry may change over time and noted that some of the organisations studied have updated their websites since the research was conducted.