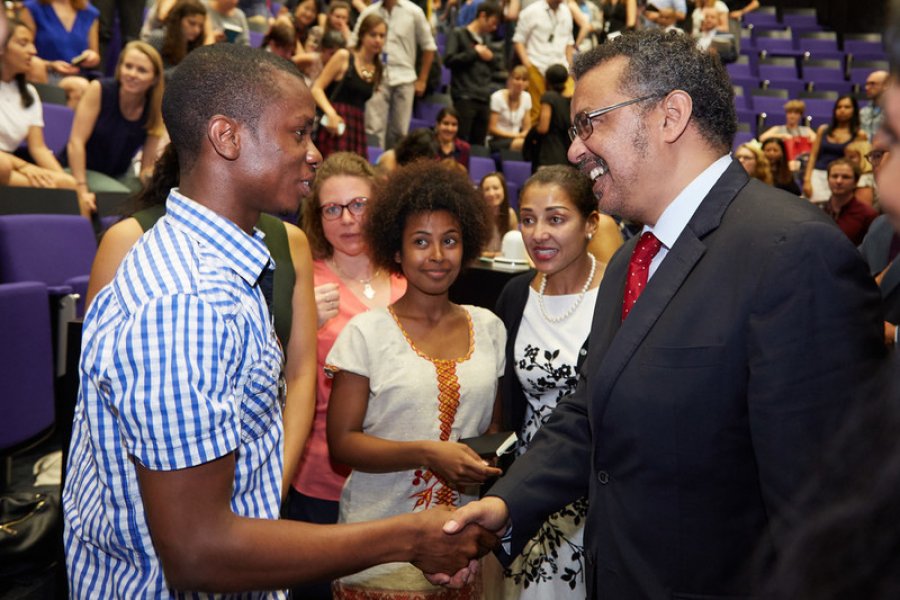 Dr Tedros Adhanom Ghebreyesus, who graduated from the London School of Hygiene & Tropical Medicine (LSHTM) with a Master’s in Immunology of Infectious Diseases in 1992, has been re-elected for a second term as Director-General of the World Health Organization (WHO).

He was first elected to the influential global health position in 2017, the first person from the WHO African Region to head the world’s leading public health agency.

In 2012, LSHTM awarded him an Honorary Fellowship, its most prestigious honour.

LSHTM Director Professor Liam Smeeth said: “Congratulations to Dr Tedros on his re-election. His expert leadership and steadying hand over the last five years have been crucial during challenging times.

“We are proud of the huge contributions an alumnus, Honorary Fellow and true friend of the London School of Hygiene & Tropical Medicine is making, along with many others from our community who are working so effectively to improve people’s health.

“We look forward to continuing work with Tedros to address current and future health challenges.”

Dr Tedros will continue to work alongside fellow LSHTM alumni Dr Matshidiso Rebecca Moeti, Dr Carissa Etienne and Dr Takeshi Kasai, who are all elected WHO Regional Directors. In addition, Dr Hans Kluge, Regional Director for Europe, is an Honorary Professor in the Faculty of Public Health and Policy at LSHTM.

Dr Moeti from Botswana graduated with a Master’s in Community Health for Developing Countries in 1986. She became the first woman WHO Regional Director for Africa in February 2015 and was re-elected for a second term in 2019.

Dr Etienne from Dominica graduated with a Master’s in Community Health in Developing Countries in 1982. She became WHO Regional Director for the Americas in February 2013 and was also re-elected for a second term in 2019.

Dr Takeshi Kasai, WHO Regional Director for the Western Pacific since 2019 and from Japan, graduated with a Master's in Public Health in Developing Countries in 1996.