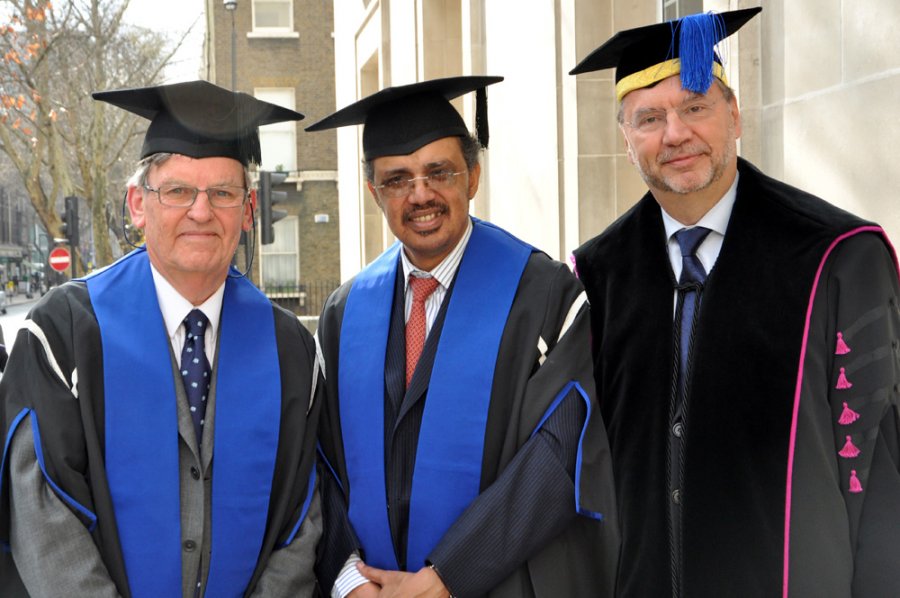 Dr Tedros completed a Master’s in Immunology of Infectious Diseases at the School, graduating in 1992. In 2012, the School awarded him an Honorary Fellowship, its most prestigious honour. Prior to his election as WHO Director-General, Dr Tedros served as Ethiopia’s Minister of Health and then Minister of Foreign Affairs. He has also served as chair of the Board of the Global Fund to Fight AIDS, Tuberculosis and Malaria; as chair of the Roll Back Malaria (RBM) Partnership Board, and as co-chair of the Board of the Partnership for Maternal, Newborn and Child Health.

Commenting on the appointment, Prof Piot said: “I offer my warmest congratulations to Dr Tedros, and the London School of Hygiene & Tropical Medicine welcomes his appointment to this critical global health role.

“As an alumnus and Honorary Fellow, Dr Tedros has strong ties with our School, and we worked closely with him during his time as Minister of Health of Ethiopia.

“Dr Tedros is an outstanding leader in public and global health and the expertise he brings to the role will be extremely valuable. His work to reform Ethiopia’s health system and to ensure more people across Africa have access to health coverage demonstrate his firm commitment to reducing health inequalities.

“Events of recent years have shown us that now, more than ever, we need a strong WHO in order to unite countries and enable the international community to deal with the biggest health challenges of our time. Dr Tedros will play a critical role in ensuring the organisation continues to strengthen health systems and improve the way the world prepares for and responds to disease epidemics, building on lessons learnt from the Ebola crisis that devastated communities in West Africa.

“We look forward to working with the new Director-General on his important mission to ensure the WHO works effectively to improve the health of people around the world.”

WHO Member States elected Dr Tedros at the World Health Assembly. He was one of three remaining candidates for the role, alongside Dr Sania Nishtar from Pakistan and Dr David Nabarro from the UK. Dr Nabarro is also a School alumnus, completing a Master’s in Community Health in Developing Countries in 1979, and receiving an Honorary Fellowship in 1999.

Dr Tedros will begin his five-year term as WHO Director-General on 1 July 2017.

WHO announces Dr Tedros as new WHO DG
Who will be the next leader of the WHO? School alumni blog
Learn More