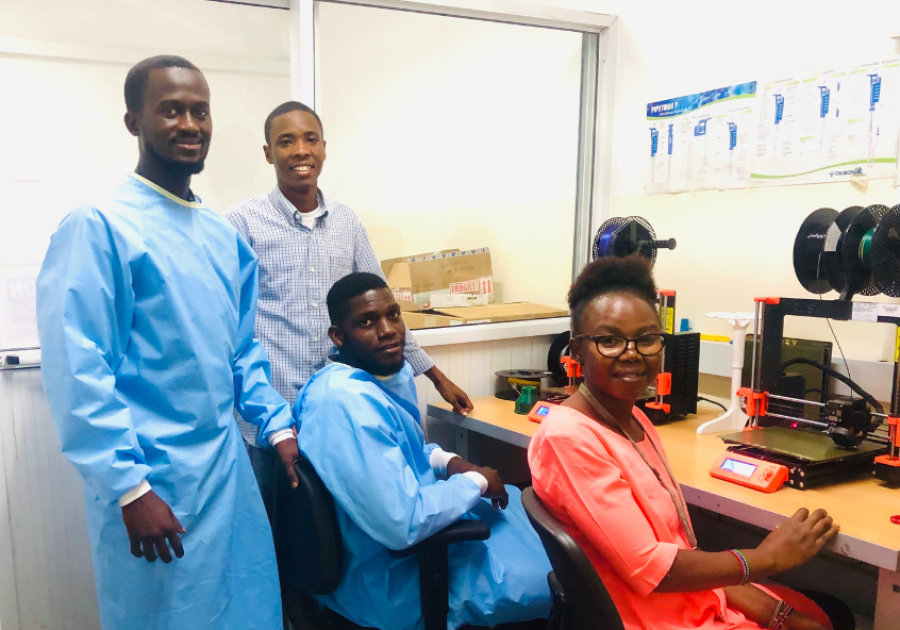 A group of students based at the Medical Research Council (MRC) Unit The Gambia at the London School of Hygiene & Tropical Medicine (LSHTM) have come up with a creative waste recycling solution using a 3D printer to transform plastic and organic materials into a range of useful items.

The MRC Unit The Gambia at LSHTM is the second largest employer in the country with more than 1,000 staff and students. As such it produces large quantities of plastic waste, as well as green waste. This waste is currently not recycled, ending up either in landfills or being incinerated, releasing substances harmful to human health and the environment.

The winning idea – awarded £15,000 in the Queen’s Platinum Jubilee Student Challenge – proposes setting up two waste recycling plants. The first is a plastic recycling plant with a 3D printer that will use plastic waste materials generated by the Unit. The plastic waste will be shredded and melted at the plant, and then used in the 3D printer to print a range of reusable products for the Unit, including laboratory equipment, medical components, waste bins and outdoor furniture.

The second green waste recycling plant will largely be constructed using objects printed by the 3D printer. This plant – known as a biodigester – will use organic waste, such as leftover food, to produce methane. This gas will then be used to power the cookers in the Unit’s popular ‘Bantaba’ restaurant. Bio-slurry, produced as a by-product of the reaction in the biodigester, will in turn be used as fertiliser for the Unit's flower and community vegetable garden.

The winners believe both plants will contribute to the institute’s goal of achieving net zero emissions by 2030.

Dr Rosemary Green, academic lead for the project from LSHTM, said: “We were excited to bid for the Queen’s Platinum Jubilee Student Challenge, and when we saw the proposed idea from the Gambian team we thought it was the perfect combination of innovation, simplicity and scalability.

“I’m very excited to see how the students will develop their ideas to make the MRC Unit The Gambia at LSHTM a leader in sustainability.”

The Unit is in the final stages of developing its own Energy and Carbon Management Plan which will detail the actions that need to be taken to reach net zero carbon emissions. This project will play an important part in achieving this goal by reducing emissions from the incineration process as well as from transporting waste to landfills. In the future it is hoped the project could enable modelling research to evaluate the health benefits from reduced air pollution. Using biogas in the kitchens of the ‘Bantaba’ restaurant will also reduce reliance on fossil fuels.

This project at the Unit is only the first step in increasing sustainability. The long-term plan is to eventually see the winning team partner with the Unit to scale up and serve the community’s demand for recycled products, organise training sessions on the recycling scheme, as well as share recycling skills with sister facilities.

PhD student Aliyu Nuhu Ahmed, who is part of the winning team, said: “Our integrated system of waste recycling will not only deal with the huge amount of waste generated at the MRC Unit, but also build capacity on recycling waste both within the Unit and outside the broader community.”

Sustainable travel and net zero can only be achieved if higher education institutions radically rethink their approach
Seen and heard: Why young people’s voices must be listened to and acted upon to tackle climate change
LSHTM begins largest ever sustainability drive
LSHTM receives Queen’s Anniversary Prize for COVID-19 response team effort
The Centre on Climate Change and Planetary Health
Research Degrees and Doctoral College
Stay Connected