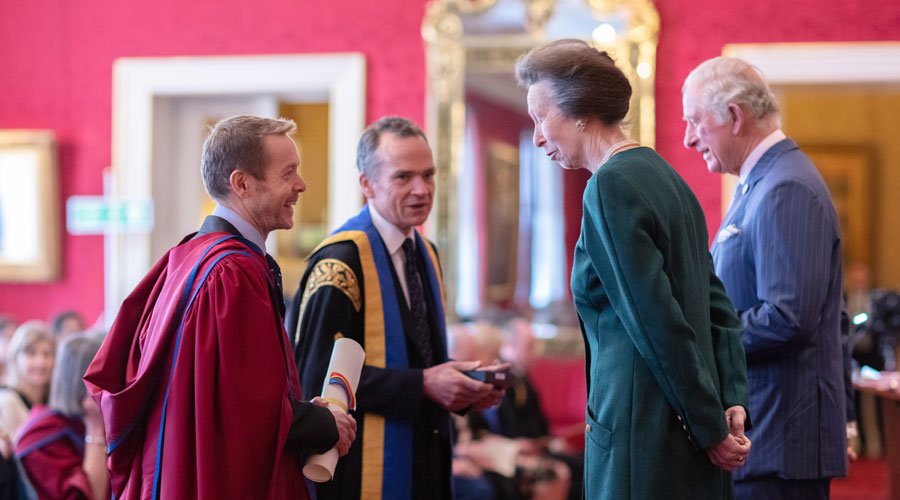 The Prince of Wales and the Princess Royal formally presented the prize at a ceremony at St James’s Palace.

LSHTM Director Professor Liam Smeeth and infectious disease epidemiologist Professor John Edmunds collected the medal and certificate on behalf of LSHTM - whose staff, students and alumni all played a part in the response.

The prizegiving followed a special dinner at the Guildhall in London to mark the occasion. Half of the LSHTM guests were selected through a lottery and included staff from all different roles and departments.

The Queen’s Anniversary Prizes are part of the honours system and are awarded every two years by the Queen on the Prime Minister’s advice. The honour is awarded to institutions who have demonstrated excellence, innovation and practical benefit to the UK and for public benefit in general.

Professor Smeeth said: "It was a real privilege and honour to accept this award on behalf of the entire LSHTM community. I am extremely proud of everyone who has played their part through the huge challenges of the last two years.

"With our partners around the world, we have made a positive impact on improving understanding of COVID-19. We must continue to work together to learn from experience and take an equitable and sustainable approach to outbreak response and pandemic preparedness in the future."

Project administrator Sabrina Dogbe was one of the 'lottery winner' colleagues who joined in with the Queen's Anniversary Prize celebrations. On her way in, she said:  “I put my name down for the ticket and I was really surprised to get the email to attend. This is a lovely opportunity, a wonderful time out for all of us going.”

LSHTM was in a unique position to act when COVID-19 hit the world. Emerging infections and preparing for epidemics is a strategic priority for research and education, and specialist teams were set up to support responses to crises as they were unfolding.

LSHTM was previously awarded a Queen’s Anniversary Prize for its response to the Ebola epidemic in West Africa in 2014-15. And in September 2019, teams were on the frontline in DRC responding to the world’s second largest Ebola epidemic, including running new trials of an Ebola vaccine. A few months later COVID-19 hit the world, and LSHTM quickly formed an institutional taskforce to direct research priorities, rapidly facilitate collaborations, and enable new initiatives to get under way at speed. That was the catalyst for a huge breadth of work which is ongoing.

Experts were at the forefront of national and international efforts, from modelling the spread, control measures and impact of the virus, to tracking attitudes and sentiments around vaccines. Clinically-trained staff and students immediately returned to work in the NHS, while staff and alumni based in Africa scaled up surveillance, diagnostic and testing capacity, and supported national governments and Ministries of Health on mitigation efforts. Around half (1,700) of our staff are based in The Gambia and Uganda.

Teams at the MRC Unit The Gambia at LSHTM and The Medical Research Council/Uganda Virus Research Institute and London School of Hygiene & Tropical Medicine Uganda Research Unit have been providing critical frontline support to government and continental COVID-19 responses. In Uganda, for example, researchers evaluated SARS CoV-2 rapid diagnostic tests and PCR kits, and generated the first Ugandan SARS-CoV-2 full genomes through rapid local sequencing. This helped Uganda to understand the disease, and monitor and control virus transmission. In The Gambia, the team rapidly built three facilities to increase the number of hospital beds across the country and provide crucial clinical care for COVID-19 patients, along with a range of other activities.

The work doesn’t stop, however, and LSHTM is launching a new Centre for Epidemic Preparedness & Response to bring together insights and innovations from around the world to help continue to tackle epidemics wherever they might occur.

LSHTM awarded Queen’s Anniversary Prize for COVID-19 response
Rebuild, repair and reimagine: as we take life off hold, we need to look forward
On the front line: a global response to COVID-19
Learn More