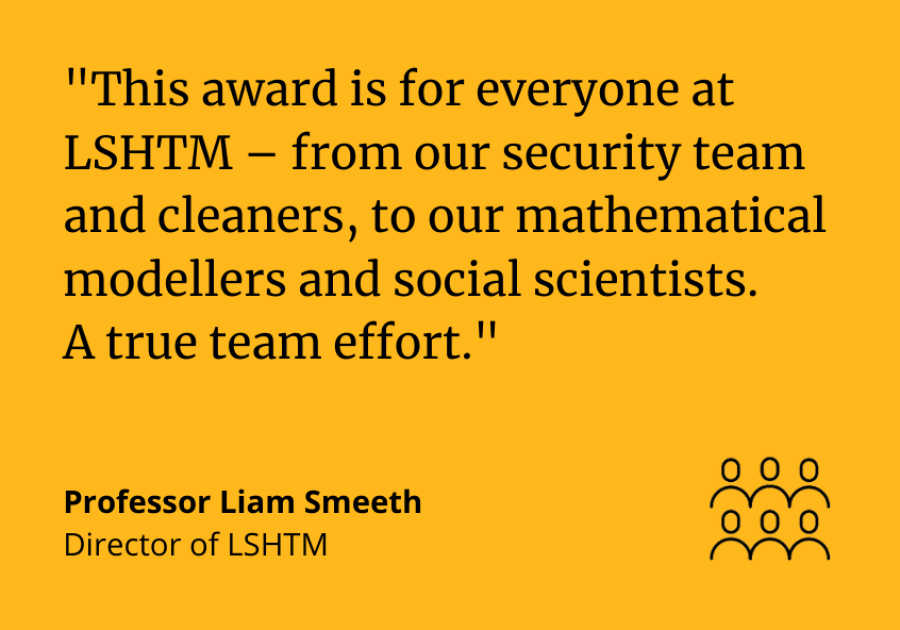 The Queen’s Anniversary Prizes are part of the honours system and are awarded every two years by the Queen on the Prime Minister’s advice. The honour is awarded to institutions who have demonstrated excellence, innovation and practical benefit to the UK and for public benefit in general.

LSHTM was previously awarded a Queen’s Anniversary Prize for its response to the Ebola epidemic in West Africa in 2014-15. Unique in the honours system, analogous to honours awarded to individuals, this award is granted to an institution as a whole. This year’s Prize will be formally presented to LSHTM in February 2022 by a member of the royal family at a ceremony in London.

Professor Liam Smeeth, Director of the London School of Hygiene & Tropical Medicine, said: “It’s a huge honour to be recognised by the Queen in this way. I’m absolutely delighted that the expertise and hard work of so many people in the LSHTM community has been recognised.

“It’s a credit to all our staff, students, alumni and partners who have united to lessen the impact of the pandemic and make sure the world is prepared for future crises.

“This prize is for everyone at LSHTM – from our security team and cleaners who allowed critical lab work to continue by keeping our buildings open, to our mathematical modellers and social scientists who provided crucial evidence for policymakers. It has been a true team effort.

“I also want to say a huge thank you to Peter Piot for his invaluable contribution and leadership as Director over the last 11 years before I took up the role this year.”

LSHTM was in a unique position to act when COVID-19 hit the world. Emerging infections and preparing for epidemics is a strategic priority for research and education, and specialist teams were set up to support responses to crises as they were unfolding,

In September 2019, teams were on the frontline in DRC responding to the world’s second largest Ebola epidemic, including running new trials of an Ebola vaccine. A few months later COVID-19 hit the world, and LSHTM quickly formed an institutional taskforce to direct research priorities, rapidly facilitate collaborations, and enable new initiatives to get under way at speed.

That was the catalyst for a huge breadth of work which is ongoing.

Experts were at the forefront of national and international efforts, from modelling the spread, control measures and impact of the virus, to tracking attitudes and sentiments around vaccines. Clinically-trained staff and students immediately returned to work in the NHS, while staff and alumni based in Africa scaled up surveillance, diagnostic and testing capacity, and supported national governments and Ministries of Health on mitigation efforts. Around half (1,700) of our staff are based in The Gambia and Uganda. Teams at the MRC Unit The Gambia at LSHTM and The Medical Research Council/Uganda Virus Research Institute and London School of Hygiene & Tropical Medicine Uganda Research Unit have been providing critical frontline support to government and continental COVID-19 responses. In Uganda, for example, researchers evaluated SARS CoV-2 rapid diagnostic tests and PCR kits, and generated the first Ugandan SARS-CoV-2 full genomes through rapid local sequencing. This helped Uganda to understand the disease, and monitor and control virus transmission. In The Gambia, the team rapidly built three facilities to increase the number of hospital beds across the country and provide crucial clinical care for COVID-19 patients, along with a range of other activities.

The work doesn’t stop, and LSHTM will soon be launching a new Centre for Epidemic Preparedness & Response to bring together insights and innovations from around the world to help continue to tackle epidemics wherever they might occur. Sign up to the newsletter mailing list for details about the launch.