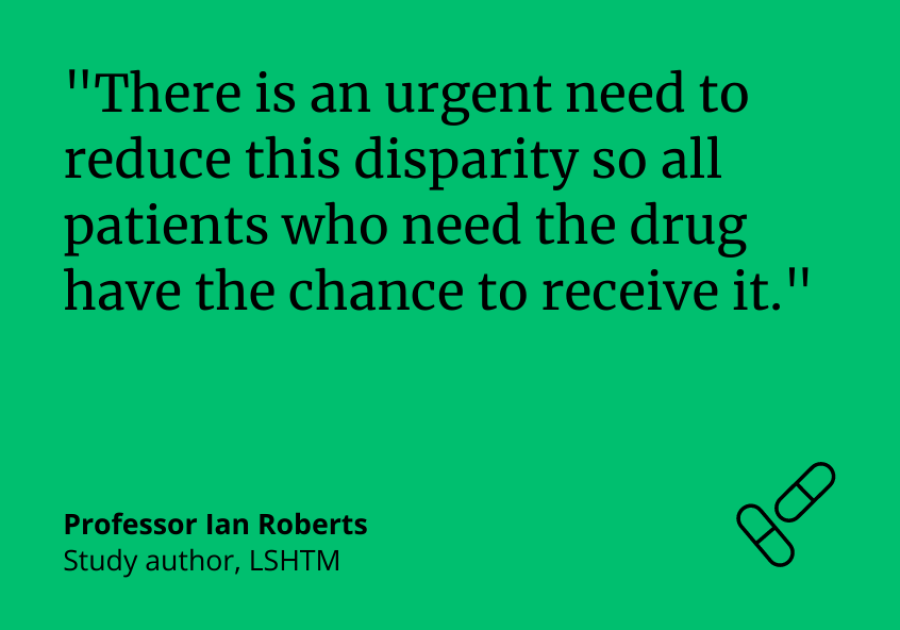 Injured women are half as likely as men to receive the life-saving drug tranexamic acid (TXA) even though the treatment is equally effective regardless of sex, according to new research in the British Journal of Anaesthesia.

The study was conducted by a team from the London School of Hygiene & Tropical Medicine and University Hospitals Plymouth NHS Trust.

In this two-part investigation, the team initially re-analysed data from two large randomised trials involving over 20,000 adult trauma victims, whose original findings showed that TXA can save the lives of tens of thousands of accident victims worldwide. They found the drug is equally effective in male and female patients and reduces the risk of death by up to 30%.

They next looked at data from 216,000 injured patients included on the Trauma Audit Research Network (TARN) database for England and Wales to see if injured women were being treated to the same extent. The researchers found that compared with men, injured women were half as likely to get TXA, both in and outside of the hospital setting. The discrepancy in treatment occurred even where women have the same risk of death from bleeding as men. The gap in administration was greatest in older patients and those with a lower risk of death from blood loss.

Professor Ian Roberts from the London School of Hygiene & Tropical Medicine and study author, said: “These results are very concerning. TXA is the only proven lifesaving treatment for traumatic bleeding. Women were treated less frequently than men regardless of their risk of death from bleeding or the severity of their injuries. This looks like sex discrimination, and there is an urgent need to reduce this disparity in TXA treatment so all patients who need the drug have the chance to receive it.”

Tranexamic acid is a safe and established treatment for bleeding. Current UK guidance for its administration states it should be given where there is “known or suspected severe traumatic haemorrhage” and the injury has occurred within the previous three hours. It is also administered to patients with certain types of head injury.

Professor Tim Nutbeam from University Hospitals Plymouth NHS Trust and study author, said: “These results are striking but sadly not surprising. It is already known that women with chest pain are less likely to receive aspirin, less likely to be resuscitated for out of hospital cardiac arrest, and less likely to be taken to hospital by an ambulance using lights and sirens.

“Although we have shown large sex differences in TXA treatment, we can only speculate about the underlying causes. Clinicians in the UK must be provided with clearer treatment guidance so that we can help reduce this bias. If all patients were treated according to need, we could save 160 lives per year in the UK.”

Dr Lauren Weekes from University Hospitals Plymouth NHS Trust and study author, said “There is a vast data gap in the medical literature when it comes to health outcomes for women. By sex-disaggregating data from the CRASH trials and the TARN database our study has contributed to a body of knowledge concerning women’s health. The next step is to work towards redressing the inequitable administration of this lifesaving medication.”

The authors acknowledge limitations of the study include missing data for some of the variables used to calculate the risk of death due to bleeding, although the percentage of missing data was similar for men and women. There is also potential for inaccuracy in predictions of the risk of death from bleeding, despite studies showing the method used has high reliability.