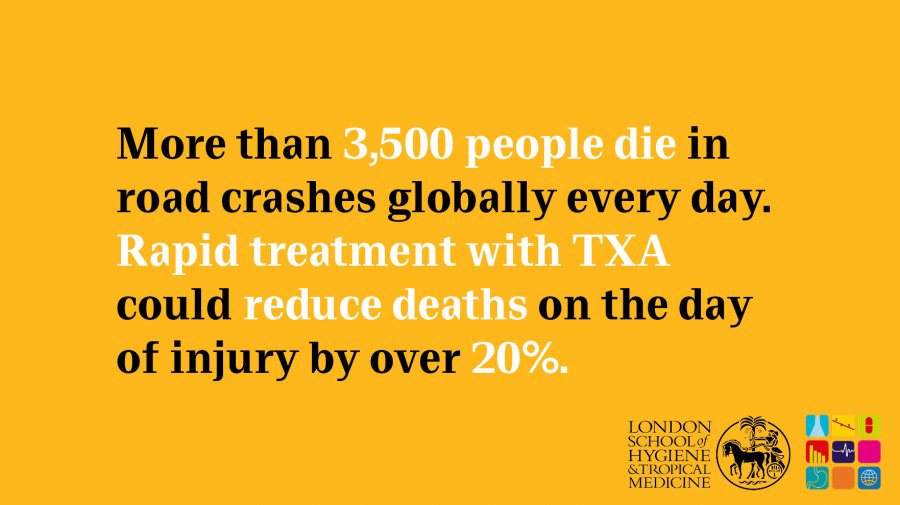 Most trauma deaths are from bleeding in the brain, chest or abdomen. Combining data from the world’s largest clinical trials in trauma in a meta-analysis, researchers found that tranexamic acid, or TXA, reduces deaths regardless of the location of bleeding.

The study, led by the London School of Hygiene & Tropical Medicine (LSHTM), provides compelling evidence that rapid TXA treatment saves lives. Previously, the research team has estimated that urgent treatment of all trauma victims, ideally at the scene of the crash, could prevent over 100,000 premature deaths each year worldwide.

TXA reduces bleeding by inhibiting blood clot breakdown and is most effective when given soon after injury. Every 15 minutes’ treatment delay reduces its lifesaving potential by 10%. However, currently few patients aren’t treated soon enough.  Trauma audit data for 2017 and 2018 show that only 9% of trauma victims in England and Wales received TXA within 3 hours of injury and only 3% got it within an hour.

Previous trials have shown that TXA reduced deaths in polytrauma patients and head-injury related deaths in traumatic brain injury, but questions remained about the treatment effects on all-cause mortality, the effects in patients with severe head injury and whether the trial results would be similar in other high-income countries.

This meta-analysis of over 10,000 trauma victims showed that, when given within three hours of injury, TXA reduces deaths on the day of injury by over 20% in patients with isolated traumatic brain injury and those with polytrauma - two subgroups previously treated differently.

Importantly, the treatment effect on all-cause mortality in both types of trauma is almost identical. The researchers also found that early TXA treatment in patients with traumatic brain injury reduces deaths regardless of country income level or injury severity. This means that patients everywhere and even severely injured patients stand to benefit if given TXA quickly. There was no evidence of adverse effects in either trial.

Amy Brenner, Research Fellow in Epidemiology at LSHTM and first author of the research, said: “This latest analysis provides the most definitive evidence on the effects of TXA in trauma victims to date, making TXA treatment much simpler – paramedics can rapidly treat all trauma patients without having to first determine if they have an isolated head injury.”

The research team pooled data from two large randomised controlled trials of TXA in trauma patients in a one-step fixed effects individual patient data meta-analysis using a regression model. Using data from a trial of TXA in isolated traumatic brain injury, they also analysed the effects of TXA on deaths from any cause within 24h of injury and within 28 days, stratified by severity and country income level. This provided a deeper understanding of the neuroprotective effects of TXA in traumatic brain injury.

Dr Ian Roberts, Co-Director of the Clinical Trials Unit at LSHTM who led the large global trials of TXA in trauma, said: “The science is clear – TXA saves lives – the challenge now is to ensure that trauma patients receive urgent treatment.”

Jeannot Mersch, President of the European Federation of Road Traffic Victims (FEVR), commenting on the results, said: “We call on political leaders and health ministers around the world to have this treatment available in their rescue services as this would largely help us reach the target set by the EU and UN for reducing road deaths in road traffic by 50% till 2030, and keep on track towards the final goal, Vision Zero - no more deaths and serious injuries in our streets and on our roads.”

As the only proven lifesaving treatment for traumatic injury, TXA is included in guidelines and protocols around the world, including the WHO list of essential medicines. In addition to being safe and clinically effective, TXA use in trauma patients is highly cost-effective, even in low- and middle-income settings. Yet only a fraction of trauma victims receives prompt TXA treatment. This needs to change, says victims’ organisations.

Recent research found that TXA is well tolerated and rapidly absorbed when given to bleeding trauma patients by intramuscular injection, meaning first responders can quickly give TXA at the scene. Usually given by intravenous injection (IV), intramuscular administration could greatly expand access to urgent pre-hospital TXA treatment, improving trauma care around the world, especially in low- and middle-income countries where over 90% of trauma deaths occur.

Each year around five million people worldwide die from injuries, many of which happen in road crashes, the leading cause of death and acquired disability among young people, particularly young men. Every 24 seconds a person is killed on the roads. The bereaved families of the victims suffer long lasting, often permanent, grief and loss.

Sunday 15th November 2020 marks 25 years since the World Day of Remembrance for Road Traffic Victims was first observed internationally. This year, the European Federation of Road Traffic Victims (FEVR) and the research team are making a call to action for a better post-crash response – ensuring road traffic victims get TXA as soon as possible to reduce road crash deaths.