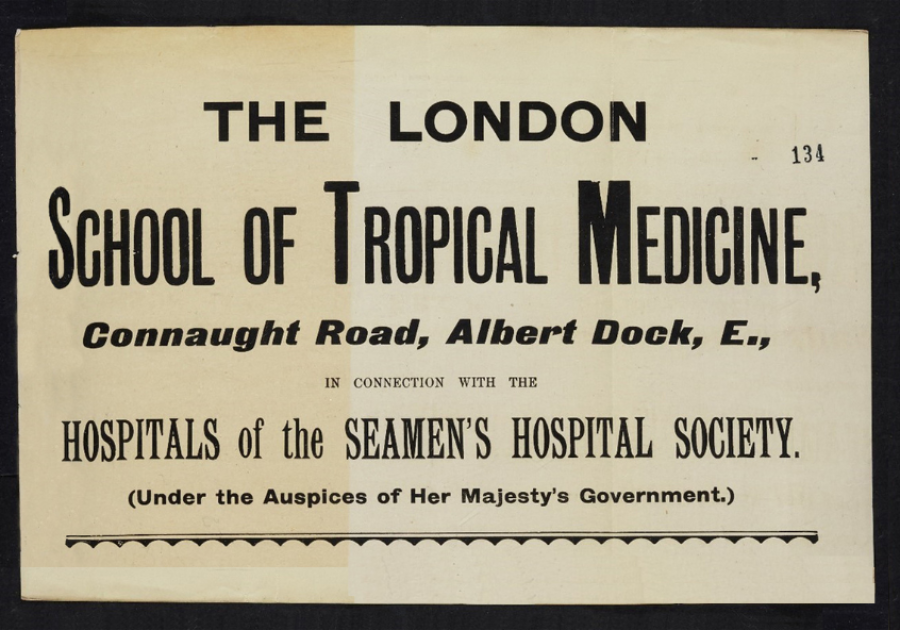 A new report sheds light on the colonial history of the London School of Hygiene & Tropical Medicine (LSHTM).

The LSHTM and Colonialism - A Report on the Colonial History of the School (1899– c.1960) was written by Dr Lioba Hirsch with additional input from Dr Rebecca Martin.

The study was commissioned in 2018 by LSHTM and carried out by the Centre for History in Public Health at LSHTM. It aimed to understand the consequences of LSHTM’s engagement with the British Empire for research and teaching, and for its institutional development.

This is part of a wider programme of decolonisation work at LSHTM which seeks to uncover underlying structural issues which continue to hold back progress towards equity among staff, students and global partnerships. The colonial history report provides an opportunity for the LSHTM leadership and community to address the reality of its colonial legacy and impact, and to create a future that everyone can be proud of.

The work involved extensive research including reviewing LSHTM’s own archives as well as records elsewhere such as in the National Archives. Through an examination of funding, governance, teaching and partnerships, the report gives an account of the origins and first 60 years of LSHTM.

It brings into focus the extent to which LSHTM owed its existence and development through the first half of the 20th century to funding, students and research created to support colonialism, with what we now understand as associated patterns of racial discrimination and exploitation.

The report explains how the institution was established and originally run in close co-operation with the Colonial Office, implementing its activities and benefiting from them. Funding came extensively from the colonies themselves, while studying at LSHTM became a direct pipeline to serve in the West African Medical Staff which openly barred doctors of non-European descent. ‘Tropical medicine’, as it was taught and studied at LSHTM, was designed to uphold colonialism and protect the financial value of the Empire by ensuring white men could survive while running the colonies – not with the aim of addressing human health issues in general.

Report author Dr Lioba Hirsch said: “I hope people realise the extent to which the founding and development of LSHTM not only coincided with British colonialism but was a direct consequence of it. LSHTM was originally not designed as an inclusive institute for people of colour or to benefit their health. Its current standing as an international leader in global public health, its areas of expertise and influence are in great part due to the research it conducted and the reputation it acquired during and in the service of British colonialism.”

Although it was known that LSHTM was shaped by colonialism, previous historical accounts were found to have glossed over or not discussed it, including the racial discrimination which accompanied it.

The report highlights the nature of societal norms of the time, such as notions of white supremacy and eugenics, but also the ways in which LSHTM benefited from them and propagated them rather than challenging the status quo.

There are gaps, such as in the archival records which do not reflect the viewpoint of affected people and nations, and the authors acknowledge that the research is not definitive.

However, it provides a base for further research and provides important context to underpin actions to address structural racism and its effects on the LSHTM of today which are a result of its past.

Dr Hirsch said: “The important thing now is what happens next. My hope is that this report will enable a deep-seated realisation in staff, especially at senior levels, that the way in which LSHTM operates today, and how it treats staff of colour, from academic to professional services to cleaning and security staff, does not occur in a vacuum. It too is a continuation of the way it was set up.

“It costs some of us much more to show up to work and navigate professional life in an institution that was not created for Black and Brown people. This must be acknowledged by the LSHTM leadership and be a catalyst for engendering structural shifts in how LSHTM carries out research, its recruitment and promotions processes, and its values.

“Researching and writing this report was very challenging and carried a lot of responsibility. I received excellent support, especially from the archives team and the Centre for History in Public Health at LSHTM, but it was still a big undertaking. I am grateful for the opportunity and hope people find it useful and empowering.”

The next step for LSHTM is to reflect on this knowledge and ensure positive actions are taken in how it operates today.

Dr Martin is currently working on connecting this report with LSHTM today in a short follow-up project. This project will do some of the work to analyse changes made within LSHTM in the post-colonial period after 1960.

Professor Anne Mills, Deputy Director and Provost at LSHTM, said: “This very thorough and informative report is an important step on our journey towards a fairer future at LSHTM. We need to face up to our past in order to be able to move forward and continue LSHTM’s mission to improve health worldwide in a fully equitable and progressive way. We are committed to LSHTM being a place of anti-racist education and employment, with our ongoing research efforts committed to addressing our colonial origins through capacity building and partnerships.”

Professor Liam Smeeth, Director of LSHTM, said: “This report shows the reality of LSHTM's colonial past, and I apologise to all those who have been negatively impacted.

“I would like to thank everyone who contributed to this important work that provides a valuable contribution to our efforts to redress the enduring effects of colonialism at LSHTM and in global health. Particular thanks to Lioba Hirsch for leading the project, Rebecca Martin for her contribution, and Anne Mills and Martin Gorsky for steering it along the way.”

LSHTM will hold discussions with its staff and student community to share reflections and reactions to the report, and formulate collective thoughts on ways forward.

Over the last few years, LSHTM’s decolonising work has included: