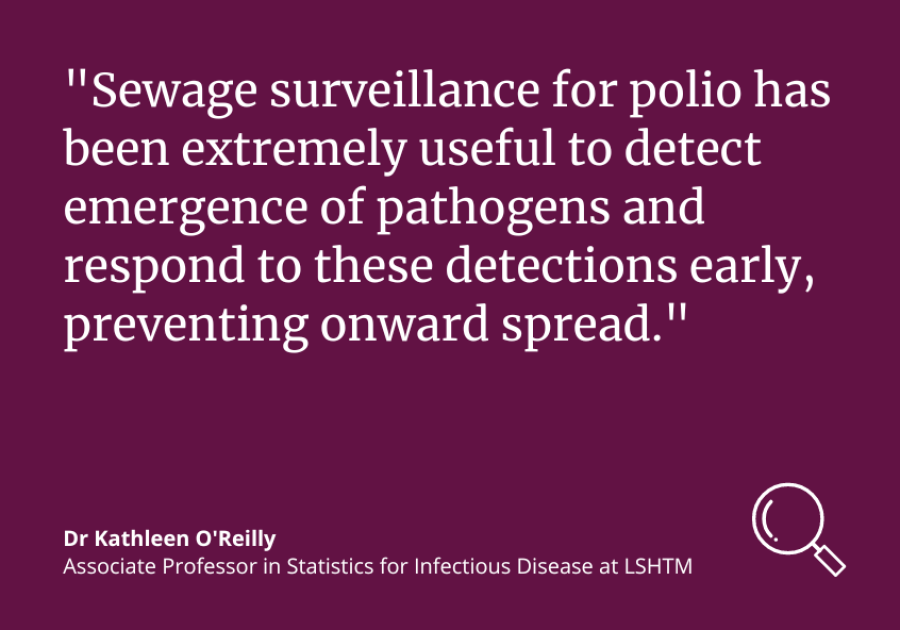 While it is normal for one to three 'vaccine-like' polioviruses to be detected each year in UK sewage samples, the UKHSA has reported that several closely-related viruses have been found during routine surveillance of samples taken between February and May this year. LSHTM polio experts comment:

David Heymann, Professor of Infectious Disease Epidemiology at LSHTM, said: “Vaccine derived polio virus is now present in many countries around the world.  The virus results from a mutation of the Sabin virus that is a live virus used to vaccinate against polio, and it causes paralysis in some, though the majority of infections are asymptomatic.

“Sabin-virus based vaccine (live oral polio vaccine) is now only being used in countries that are in the active eradication phase of polio eradication – other countries have switched to inactivated polio virus vaccine that cannot mutate.

“The fact that it has been found in sewage in the UK attests to the strength of the surveillance programmes of UKHSA.  Its presence in the UK reminds us that polio eradication has not yet been completed in the world.  The high vaccination coverage using inactivated polio vaccine in the UK will limit the spread of vaccine derived polio and protect those who have been vaccinated against polio paralysis.”

Dr Kathleen O’Reilly, Associate Professor in Statistics for Infectious Disease at LSHTM, said: “In these investigations, ‘vaccine-derived’ poliovirus has been detected from several sewage samples from the north London area. These findings suggest that there may be localised spread of poliovirus, most likely within individuals that are not up to date with polio immunisations. The most effective way to prevent further spread is to check vaccination histories, especially of young children, to check that polio vaccination is included. The UK vaccinates against polio using the ‘inactivated’ vaccine (called the IPV) where there is no risk of onward spread. For families that have recently moved to the UK, I recommend that they contact their local doctors (“GP”) and they will provide further support to confirm that children are up to date with their vaccines. It is free to register.

“The findings are from sewage sampling, as people infected with poliovirus shed virus in their faeces, which can then be detected in sewage treatment plants. Sewage surveillance for polio, and other pathogens, have been extremely useful to detect emergence of pathogens and respond to these detections early, preventing disease and onward spread. The surveillance in London that identified vaccine-derived poliovirus is such an example. Another example is from Israel in 2014 where poliovirus was also detected in sewage samples, and polio cases were prevented through vaccination.

“Vaccine-derived poliovirus is present in many countries across the world, especially within the African continent and some countries in Asia. The origin of the vaccine-derived poliovirus is from certain versions of the live oral polio vaccine, which are used in a small number of countries. The UK has not used this vaccine for some years. Until all poliovirus are stopped globally, all countries are at risk, highlighting the need for polio eradication, and continued global support for such an endeavour.”

Beate Kampmann, Professor of Paediatric Infection & Immunity and Director of The Vaccine Centre at LSHTM, said: “More than 20 countries in the world have reported circulating vaccine-derived polio virus (cVDPV), and the main worry here is the genetic connectedness of the strains found in the sewage water in North London, as it shows transmission in a group and not just a single 'excreter'.  These cVDPV can develop from individuals who received oral polio virus vaccine in a different country that continues to use oral polio vaccine, continue to excrete polio virus and can pass it on over long times.  In the UK we have not been using oral polio vaccine since 2003, given that polio was eradicated in the UK. Here we use the inactivated vaccine which does not carry the risk of VDPV, but also does not induce immunity at the level of the gut mucosa-which is the advantage of the oral vaccine. The trade-off is that the attenuated live virus used in the oral polio vaccine can mutate – and this then leads to VDPV.

"Although to date no cases of vaccine-associated paralysis have resulted from this finding, we must not be complacent, and it reminds us all how vital the comprehensive use of vaccines against polio is.  Some people might be confused by the fact that a vaccine can be used to combat a vaccine-derived strain of polio, as this appears counter-intuitive at first.  However, multiplication of vaccine-derived polio viruses can only happen if there is poor immunity against polio in the community, and with polio vaccine coverage at only 86% in London we have a potential pool of susceptibles.  Hence the mission now has to be that everyone looks at their immunisation books and gets their series completed, so we close the gap and don’t allow these strains to spread.

“A novel type of oral polio vaccine called nOPV has also been developed, it is designed not to allow for these mutations, and is already being used in emergencies to control outbreaks of VDPV in other parts of the world – this could be an option if we really do see wider spread.”