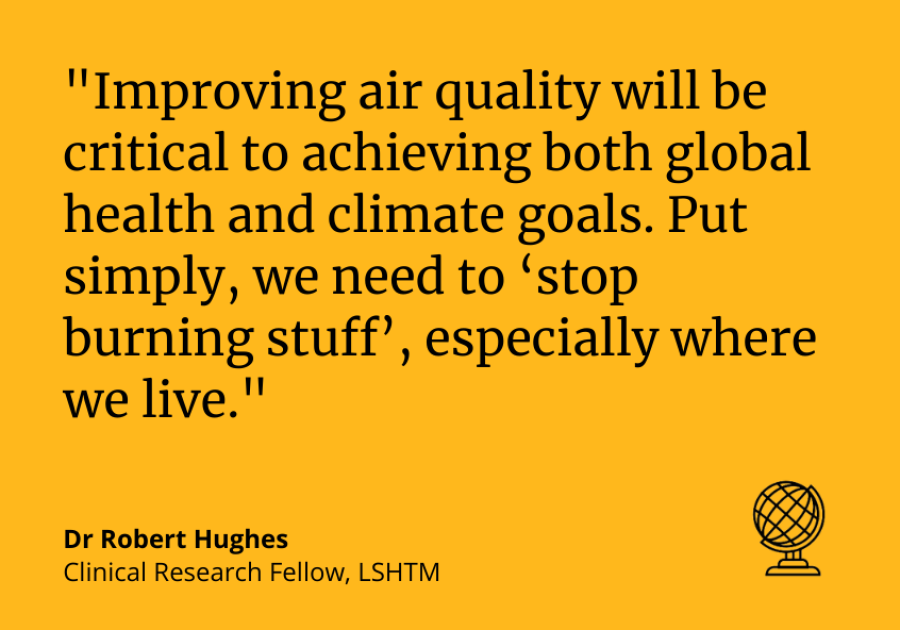 Two studies highlighting the scale of potentially life-threatening air pollution in urban areas have been published in The Lancet Planetary Health.

According to the modelling studies by US-based research teams, approximately 86% of people living in urban areas across the globe, or 2.5 billion people, are exposed to unhealthy particulate matter levels, leading to an estimated 1.8 million excess deaths in cities globally in 2019. Additionally, nearly 2 million asthma cases among children worldwide were attributable to NO2 (nitrogen dioxide gas) pollution in 2019, with two in three occurring in urban areas.

Commenting on the studies, Dr Robert Hughes, Clinical Research Fellow at LSHTM and Co-Investigator of Children, Cities and Climate project, said: “These important and timely studies underscore the urgency of improving urban air quality and reducing reliance of fossil fuels in and around our cities. The estimates add to growing evidence showing that decarbonising cities can improve our health, and that of our children, at the same time as reducing the risk of climate breakdown, building on findings from LSHTM’s Children, Cities and Climate preliminary report.

"Improving air quality will be critical to achieving both global health and climate goals. While the specific policies to do this vary from city to city, a common theme is that we need to radically cut down on the combustion of fossil fuels everywhere; put simply, we need to ‘stop burning stuff’, especially where we live. This includes stopping burning petrol and diesel to power our cars, moving away from heating our homes with fossil fuels, and decarbonising our electricity grids.

"It is useful that the studies examine trends over time and provide regional comparisons, highlighting the mixed picture globally. Although in some cities air quality may be improving gradually, in many others it is deteriorating, leading to a growing burden of air pollution-related disease, especially low- and middle-income countries.

"As acknowledged by the authors, there are several limitations that point towards the need for more data to estimate the true scale of health burdens in cities globally. However, it is noteworthy that most of these limitations mean these studies may be under-, rather than over-estimating the harms associated with air pollution.

“Further investigation into the impact of air pollution on health is needed to inform effective policy action. For example, a recent study carried out by LSHTM researchers, found that human health risks from air pollution vary depending on the proportion of different components of PM2.5.”