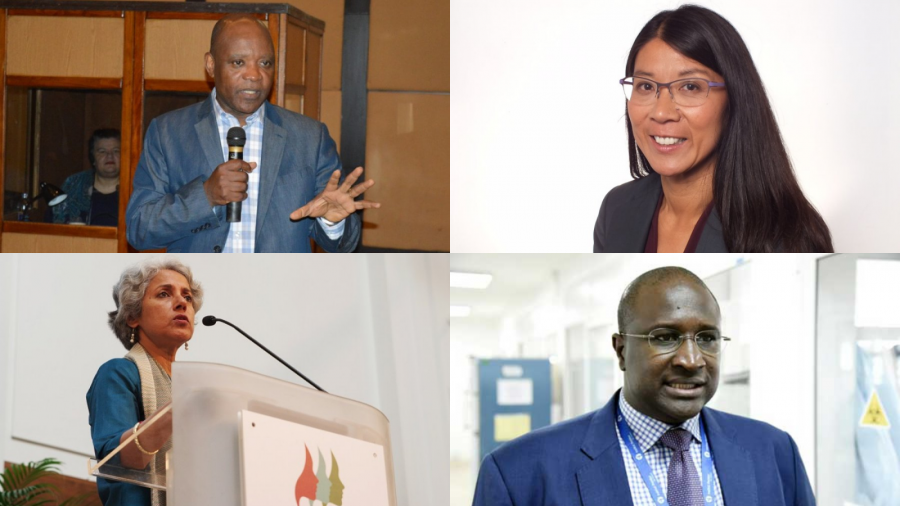 The Honorary Fellowship is LSHTM’s most prestigious honour, conferred triennially on those persons who have rendered exceptional service to our School or have attained exceptional distinction in any of the subjects taught at LSHTM. The 2021 honours were presented virtually with hundreds of LSHTM graduates watching during the annual Graduation Ceremony.

Professor Amadou Alpha Sall is the first African Director of Institut Pasteur in Dakar in Senegal, and one of the world's top scientific and public health leaders on emerging diseases and epidemics. Fortune Magazine listed him among the world's 25 greatest leaders for 2020 for his role in the response to COVID-19 in Africa.

Professor Peter Piot, Director of the London School of Hygiene & Tropical Medicine, said: “Many congratulations to Professor Sal, a generous, inspiring and highly skilled and respected leader, and colleague and friend of our School. Professor Sall played a key role in the largest Ebola epidemic in history in 2014-15, in West Africa. His lab was the first to identify the cause of the epidemic and contributed in a major way to the virology epidemiology and control of this outbreak.”

Dr Soumya Swaminathan is currently Chief Scientist at WHO and was most recently WHO's Deputy Director-General for programmes. She's a paediatrician and a clinical scientist, and a globally recognised researcher on tuberculosis and HIV. Dr Swaminathan has more than 30 years of experience in clinical care and research and has worked throughout her career to translate research into impactful programmes and policies.

Professor Richard White, Director of LSHTM’s TB Modelling and Analysis Consortium, said: “Dr Swaminathan has made an enormous contribution as a global leading TB researcher, bringing much needed attention to TB and children. She was among the first to scale-up the use of molecular diagnostics for TB surveillance and, remarkably, is a Fellow of all three science academies in India. I am delighted to confer upon Dr Swaminathan the Honorary Fellowship.”

Dr Joanne Liu was International President of Médecins Sans Frontières between 2013 and 2019. She has worked in many conflict zones, including in Palestine, Central African Republic, and Sudan's Darfur region. In 2013, Dr Liu received the Royal College of Physicians and Surgeons of Canada's Teasdale-Corti Humanitarian Award. Dr Liu continues to practice medicine, both in the field with MSF, as well as on hospital shifts in Montreal.

Professor Anne Mills, LSHTM's Deputy Director & Provost, said: I'm delighted to confer Dr Liu with the Honorary Fellowship who is known worldwide for her contributions in the field of health and humanitarian crises. Dr Liu has undertaken many missions, including providing support after the tsunami in Indonesia, assisting people affected by the earthquake and cholera epidemic in Haiti, and working with Somali refugees in Kenya.”

Dr John Nkengasong is the Director of the Africa Centres for Disease Control and Prevention, a specialist technical unit of the African Union which was established in 2017 to support public health initiatives of member states. Originally from Cameroon, Dr Nkengasong is a leading virologist with nearly 30 years of work experience in public health, including in Europe, USA, and Africa. In 2020, he was appointed as one of the WHO Director-General’s Special Envoys on COVID-19 preparedness and response and has since led Africa's response to coronavirus disease, including the training of young responders and the African healthcare volunteer workforce.

Professor Beate Kampmann, Director of LSHTM’s Vaccine Centre, said: “Dr Nkengasong has been leading the Africa public health response from the front during the COVID-19 crisis, ensuring that the voice of the continent is heard during times of decision making around clinical trials of drugs and vaccines. He has brought together public health leaders in the continent to assure that overall control measures for the pandemic are agreed and fit for purpose in Africa. I'm delighted to confer John with the Honorary Fellowship.”

The last LSHTM Honorary Fellows were conferred in 2018 and were Dr Matshidiso Moeti, Dr Natalia Kanem, and Professor Janet Hemingway.