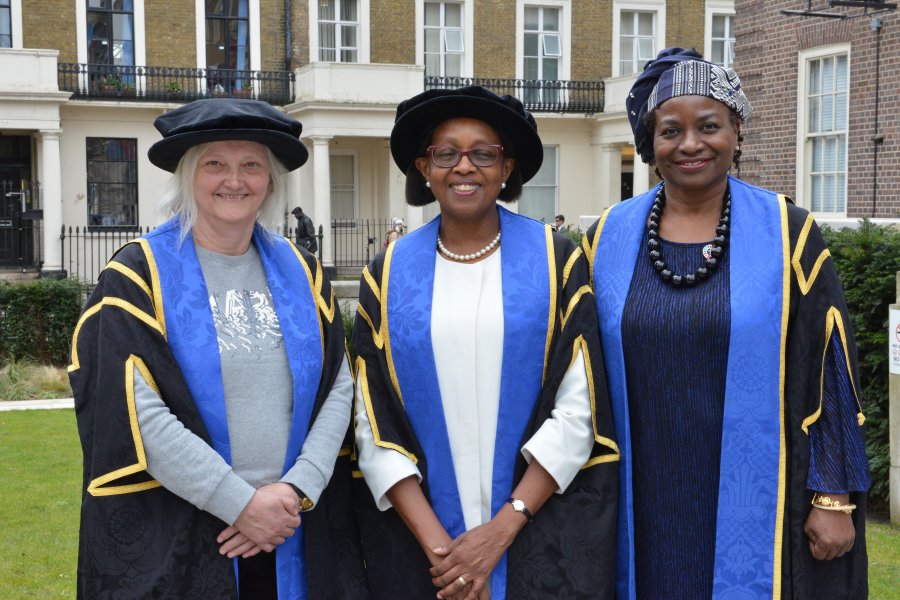 The Honorary Fellowship is LSHTM’s most prestigious honour, conferred triennially on those persons who have rendered exceptional service to our School or have attained exceptional distinction in any of the subjects taught at LSHTM. The 2018 honours were presented in front of hundreds of LSHTM graduates attending the annual Graduation Day.

Dr Matshidiso Moeti from Botswana is an LSHTM alumnus and the first woman to be appointed as WHO Regional Director for Africa. She aims to build a responsive, effective and result-driven regional secretariat that can advance efforts towards universal health coverage and accelerate progress toward global development goals, while tackling emerging threats.

Dr Moeti is a public health veteran, with more than 35 years of national and international experience. She joined the WHO Regional Office for Africa in 1999 and has held several senior positions in the Organization, including Deputy Regional Director, Assistant Regional Director, Director of Noncommunicable Diseases, WHO Representative to Malawi, and Coordinator of the Inter-Country Support Team for Eastern and Southern Africa. Prior to joining WHO, Dr Moeti worked with UNAIDS, UNICEF and with Botswana’s Ministry of Health.

Rosanna Peeling, Professor and Chair of Diagnostics Research at LSHTM, said: “Dr Moeti has been hailed as a public health leader who can transform WHO's Regional Office into the type of institution Africa and the world need. We are delighted to have this opportunity to recognise her outstanding achievements and contributions to public and global health.”

Prof Janet Hemingway initially trained as a geneticist and is currently Professor of Insect Molecular Biology and Director of the Liverpool School of Tropical Medicine, with 450 staff based in Liverpool, Malawi and several other tropical locations. She has 38 years’ experience working on the biochemistry and molecular biology of specific enzyme systems associated with xenobiotic resistance. She has been Principal Investigator on projects well in excess of £60 million including the Bill and Melinda Gates Foundation funded Innovative Vector Control Consortium.

Prof Hemmingway’s scientific achievements have been recognised in many ways. These include being named a Commander of the British Empire for services to the Control of Tropical Disease Vectors in 2012, and being inaugurated as a Fellow of the Academy of Medical Sciences in 2008, the Royal College of Physicians in 2009, and the Royal Society in 2011.

Professor Anne Mills, LSHTM Deputy Director and Provost, said: “Professor Hemingway has made exceptional contributions to global and UK science. Her scientific achievements are internationally renowned, and her contributions to vector control strategies for neglected tropical diseases have greatly helped to bring elimination within reach.”

Dr Natalia Kanem was appointed as Executive Director of UNFPA in October 2017, bringing more than 30 years’ experience to the role.

While serving as a Ford Foundation Officer from 1992 to 2005, she helped pioneer work in women’s reproductive health and sexuality, in particular through her position as the representative for West Africa. She then served at the Foundation headquarters, becoming Deputy Vice-President for its worldwide peace and social justice programmes in Africa, Asia, Eastern Europe, Latin America and North America.

From 2014 to 2016, Dr Kanem served as UNFPA Representative in the United Republic of Tanzania. In July 2016, she was named Deputy Executive Director of UNFPA in charge of programmes.

Professor Peter Piot said: “This Honorary Fellowship is in recognition of the tremendous leadership and commitment across public and reproductive health, social justice, women’s rights, and philanthropy that Dr Kanem has shown over her impressive 30 year career.”

The Honorary Fellowships come in the year that LSHTM is running a campaign to celebrate and support women in global and public health. In November LSHTM hosts the Women Leaders in Global Health Conference 2018, which will highlight emerging and established women leaders in global health, with a strong focus on mentoring.