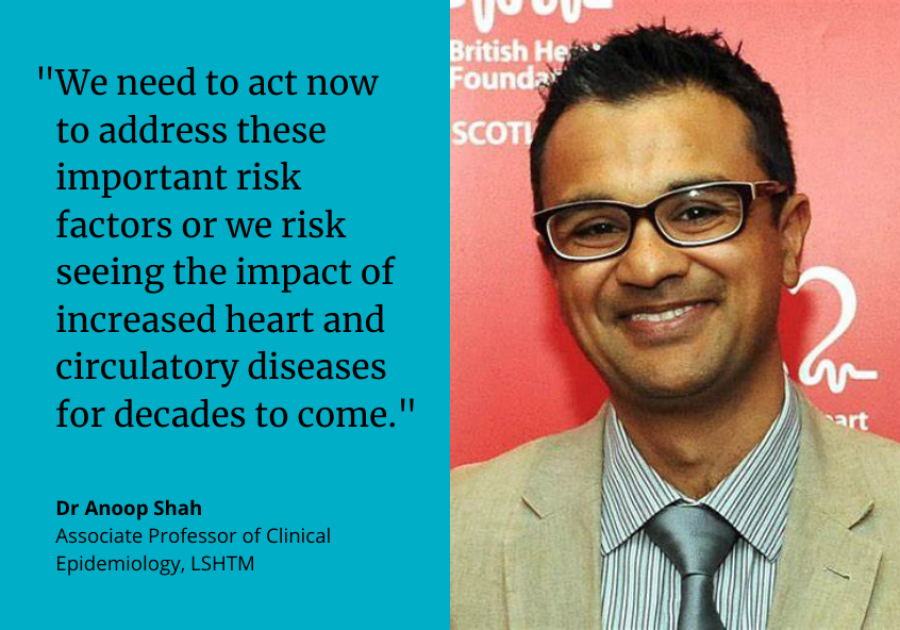 Weight gain and increasing diabetes prevalence are stalling efforts to reduce the number of heart attacks and strokes, according to a new study published in The Lancet Regional Health – Europe.

Funded by the British Heart Foundation (BHF), researchers from the London School of Hygiene & Tropical Medicine (LSHTM) found that decreases in three major risk factors contributed to a fall in the number of heart attacks and strokes between 1990 and 2014. However, progress in reducing numbers further has been stalled by increasing body mass index (BMI) and diabetes prevalence over the same period.

They found that 74% of this fall in heart attacks and 68% of that in strokes could be accounted for by changes in risk factor prevalence. This was driven by decreases in blood pressure, cholesterol levels and smoking rates.

Average systolic blood pressure fell from 140mmHg to 129mmHg, cholesterol levels fell from 6.4mmol/L to 5.0mmol/L, and adult smoking rates more than halved from 58% to 25%.

However, average BMI increased from 27.2kg/m2 to 28.1kg/m2, and diabetes prevalence in this period in Scotland more than doubled, from 4% to 9% of the population. This was estimated to lead to a 20% increase in heart attacks and a 15% increase in ischaemic strokes attributable to these two risk factors.

The researchers estimate that increased diabetes prevalence contributed to nearly as many heart attacks as the decline in smoking prevented.

The picture is similar across the UK. Figures show that the number of people being diagnosed with diabetes and developing obesity has increased over the last couple of decades. Analysis also shows that the contribution of diabetes to heart and circulatory diseases is increasing. In 1990 the number of deaths from heart and circulatory diseases associated with diabetes was 19%, and by 2019 this had reached 26%.

Dr Anoop Shah, Associate Professor at LSHTM, who led the research, said: “The amount that different risk factors contribute to heart attacks and strokes has shifted over the last 25 years. Weight gain and diabetes now play a more prominent role in the development of these conditions. Public health policy urgently needs to incorporate these, taking a more holistic view of the range of risk factors that can lead to heart and circulatory diseases.

“There’s a time lag between people contracting diabetes and developing heart and circulatory disease. We need to act now to address these important risk factors or we risk seeing the impact of these increases for decades to come.”

Professor Sir Nilesh Samani, Medical Director at the British Heart Foundation, said: “Whilst it’s great to see the positive impact that public health measures, such as the smoking ban, have had on the number of people experiencing heart attacks and strokes over the last 25 years, it’s concerning that increasing BMI and diabetes prevalence now appear to be slowing progress.

“Obesity is a major cause of type 2 diabetes and this research highlights that the Government needs to press on with the bold pledges in the 2020 obesity strategy. Excess weight is a complex issue and we cannot rely on individual willpower and exercise alone to solve the problem of increasing BMI across the population. We need to address the environmental factors that drive weight gain and the development of diabetes to not lose the gains we have made in reducing the burden of cardiovascular diseases.”

The researchers acknowledge the limitations of the study. While the team could be confident that changes in risk factors had an impact on the incidence of heart attacks and strokes, they viewed each risk factor in isolation in their analysis which means that their estimated impact is likely to be exaggerated.

This research was also supported by the Academy of Medical Sciences.